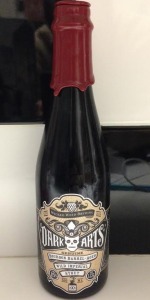 Label says Dark Arts Bourbon Barrel-Aged Stout Fermented with Brettanomyces & Espresso. Pretty sure this is the right beer since the bottle says "This year's version of Dark Arts..."

L - pours a cola-looking brown into the glass. Looks a lot thinner and clearer than I'd expect for 14%. Loud crackling head fizzes and dissipates like cola too!

S - woof. Big red wine sour twang right out of the gates. Let's dive deeper. Brief vanilla and oak up front that is quickly consumed by a vinous bourbon medley of coffee and dark chocolate. Fermented apples? All with that familiar Brett backbone. Kinda smells like EBF. Just has that aroma that screams craziness. Shame about the acquisition and consequent boot from future EBFs tho.

T - incredibly warm and inviting campfire marshmallow toastiness. Sweet caramel-drizzled regular coffee. Wow, there's a lot going on here. Heavy cream lactose, drying bourbon grain, milk chocolate brownies, and orange peel acidity. For better or for worse, the Brett lingers in the background. On the plus side, it cuts into the decadence prior and hits hard with a sobering bite to balance out the rich flavors. It almost feels out of place, even though I know that's WW's thing. This could've been a downright sinfully sweet stout without the Brett, which makes it surprisingly drinkable. A sugary residue coats the mouth, quickly absorbed by the red wine acidity.

F - I thought this was gonna be thin, but it exhibits a nice velvet body, helped along by low carb. A few bubbles toward the end put a small dent in the cream.

O - I like this. I can see how some might think it's a bastardization of two styles, but each one can hold its own. The decadent, bourbony espresso is wonderfully-executed and tamed by the Brett twang. It tastes heavy, but doesn't feel heavy, and even though there is some clashing going on, the taste is enjoyable, and that's what counts, right?

Thanks to JLindros for sharing this bottle.

A - Poured into a Kate the Great a nice dark black hue with a thin head that fades quickly to leave light wisps and no real legs.

O - Overall this was a very very poor beer. Utter mess of a stout with no redeeming qualities.

Share with rudzud, not sure if from me or him

Nose basically sour chocolate, weird chocolate shavings and sour malt, like I had chocolate milk that some weird acid splashed into it and it went sour. Bourbon, not really, imperial stout, maybe but meh, wild yeah but not good.

taste is maybe marginally better, some chocolate syrup, fluffy marshmallow that went sour and acidic, not like smashing my mouth sour but def there, and bad acid, a touch of bourbon, bitter spicy hop and roasty, sour dark bleh

Overall this was, I don't even know what to say.

Pours a dark brown body, half finger tan head, minimal retention and lacing. Smells of mild whiskey, chocolate, leather, a bit of lemon, roast, dark fruit. It's odd, not too appetizing but not offensive. Flavour isn't too much better; the Brett may have built up over the one year of age, some lemon, leather, earth mixes in with chocolate and dark fruit. Moderate bourbon. The combination just doesn't seem to work or meld together very well at one year of age. Mouthfeel is medium-thinner bodied, seems to have been thinned out a little bit. This is a beer that probably wasn't meant to be aged.

I had high hopes for this one after how good the 2015 Dark Arts was but despite having a great look and feel like this years version the souring on this one isn't doing it for me. Unfortunately both the taste and smell are disappointing and although they're complex it just doesn't really work well together. It probably would've been much, much better if they just aged it in bourbon barrels and didn't go the wild route.

A - Pours a dark pitch black with a soapy lacing ring.

M - Heavy medium body, velvet on the tongue, tang and chocolate on the back end.

O - This is a very odd beer but it works, very unique.

Pours opaque, black, with a fizzy mocha colored head that doesn't linger. Fairly typical from many brett beers ... which led me to believe this would be sour and funky. Surprisingly, the brett is fairly restrained and well integrated IMHO; some nice barny / herbal aromatics with a subtle black cherry undertone. Flavor is chocolate, roasted malt, a hint of leather / tobacco / oak, more cherry (along with raisin / date), and that slight dark cherry. Wears its ABV very well.

No bottling date that I can see. Worst wax I've ever seen in my life, it took me 10 minutes to get the cap off. You know it has to be bad for me to mention it here.

A: Pours black with a decent sized fizzy brown head. Decent retention but no lacing at all.

S: Big dark fruits and some chocolate covering it. Boozy. A little bit of overripe berry in there.

T: Huh, interesting. Bourbon up front, with some overripe berries and various dark fruits immediately following. Light chocolate coating. Charry in the finish and into the aftertaste...lingering between sips. Boozy but not 15% boozy. A lingering tartness floats around forever.

O: Interesting wild stout. Does not feel or taste anything like 15%. It's big and boozy but I would have guessed maybe 10%. This helps the drinkability a lot. Not overly sweet either. VERY fruity with some aspects of tart/overripe fruit but none of it is overpowering. It's just another layer of complexity more than anything. I like my stouts more roasty but this was well executed.

cannot understate disappointment on this beer. feel bad for those who went out of their way to procure this beer in person, much less those who traded for it.

odor is spoiled everything (mostly spoiled yogurt/milk/ugh) and sadly taste matches the horrible smell. mouthfeel tries to make up for it but nothing could save this beer.

wow...i hate to say i wouldn't cross the street for wicked weed after this and a few other beers prior.

500 mL bottle poured into a snifter.

Overall - A little sluggish and very odd. We all decided the flavor is like a fresh sheep's milk cheese.

The normally conflicting tandem of roast and sour often leads to complicated taste rather than complex layering of flavor. But those are not Wicked Weed.

Dark Art pours with a black ink appearance. Slim on retention and lace, a tawny collar of burnt crimson provides low lights about the margins. Rich butterscotch mesmerizes the nose with a swirl of the ominous elixir. Peps of sour grape, cherry and light brownie batter lie just beneath the caramel and toffee.

Smooth espresso, bittersweet chocolate, werther's originals, vanilla and toasted oak weigh on the tongue, saturating the tastebuds with its lavish malt sweetness. But balance comes first from the tangy tartness of dark berry, cherry, grape and balsamic- seeming of dry sherry with a savory port follow up.

Finishing with a relaxed malt texture, the playful acidity breaks up the creaminess and allows the dark ale to become surprisingly drinkable. Aided by tannic wood spice, the stout trends powdery and spicy. With its smoldering warmth mounting, the beer hides is alcoholic strength deceptively well.

Appearance: Pours with a murky dark appearance: the thick head left some nice traces around the glass

Smell: Roast and chocolate, with quite a dose of Bourbon and dark fruit

Taste: Roast and chocolate, up front, with the Bourbon and dark fruit adding additional complexity; the sour elements kick in, too, in the middle; quite a lot going on the finish between all of the different aspects

Overall: Hard to wrap your mind and palate around this one, given all of the different aspects presented; it will be interesting to see how this one develops; not the easiest drinker out there but a fascinating beer, nevertheless

Appearance: pours a solid black with some brown along the edges and sides. a small tannish head with decent retention. completely opaque.

Smell: alcohol, oak, roast, chocolate. I also get a very strange aroma that is somewhat cheese like.

Taste: opens with chocolate, some oak, earthy flavors. Again I get a really odd flavor I have never tasted in beer before that is quite like a strong, sharp cheese.

Mouthfeel: light and smooth for the size. very sticky and dry.

Overall: I was very excited for this beer and to share it with all my friends. I tried it on two separate occasions and just can't do it. Both groups were very disappointed. The flavor is just so strange. Maybe this one will taste great after some time but not likely enough that I will take the gamble myself.

Dark chocolate, fruity, velvety smooth. Is this really 15%?....doesn't feel like it. Amazing bourbony flavor. Oh so yum! By far Wicked Weeds best bottled beer as of this release.

S: from the tap at release, smell a faint roasty; poured from bottle last night, this was FUNKY!

T: from the tap at release, the stout character is prominent, with a fruity note; poured from bottle last night, this is a dark wild ale, with a stout character, and some kind of spice. Very peculiar

M: like it from the bottle as far as mouthfeel. The wild acidic tingle with that high ABV combined

O: Definitely feel like we made the right choice and head straight up to Asheville instead of Charlotte.

While waiting to get my allotment, I purchased one for onsite consumption in a snifter.

T - Holy smokes this is complex. You get roast from the stout and a nice complimentary tartness. Finishes with chocolate and the brett and barrel character opens up as you go on. Jam-like. Awesome. Where is the 15% by the way?

M - Crazy drinkable for 15%. Dry for sure. Goes does dangerously easy. Has a some surprising carbonation for being so big.

O - I love this for its complexity and can't wait to see how the brett character changes overtime. Definitely share with a friend. At 15% it is way more drinkable than it should be. Enjoy this one slowly.