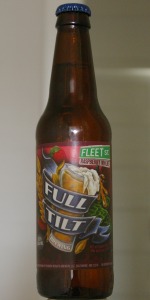 Smells like a brewpub fruit beer of yesteryear. Only better crafted than most. Smooth raspberries don't smell at all ersatz and they mingle competently against a somewhat sharp grainbill.

Tastes like fruit leather up front, a middling pale wheat in the middle, but then like really nice, fresh fruit in the end and finish. Although the base beer isn't all that great the berry-ness is handled wonderfully and that makes the beer very refreshing and drinkable.

Bear with me this is my first!!
L: murky golden color
S: strong raspberry aroma
T: a lot of raspberry
F: pretty good I think I would like it with a little more carbonation.
O: Pretty good overall especially since I usually don't care for Raspberry

When it comes to beers of Baltimore. Nothing tops Full Tilt Brewing. National Bohemian is a panther piss beer and this should be it's replacement... PERIOD... I love the taste... but the feel is just not there. I'm very fond of Baltimore beers. This one and the Camden Cream make for a great treat for any beer drinker.

I am in the process of clearing out some of therom the interminable backlog here at Chez Woody and it suddenly struck me that I have most, if not all of Full Tilt Brewing's beers, held in abeyance awaiting approved pics. This site has really sped up the process, but for a while, it was slow and once a beer went on the back burner, it became forgotten. My thanks to The Friendly Greek Bottle Shop for being an ongoing resource of singles!

From the bottle: ""Full Tilt Brewing's Fleet Street Raspberry Wheat is a refreshingly smooth yet sweet, wheat beer. The raspberry aroma and subsequent taste is ironically subtle yet memorable. Beneath the raspberry character lies a grain bill of White Wheat, 2-Row Pale, and Carapils malt balanced by Tettnang and Sterling hops, which yields a hard-to-put-down and easy-to-tilt-back tribute to enjoying the fun times ahead, leaving the bad times behind, and reveling in the thrill of the present. Face it, you are drinking a Full Tilt ..."; "Full Taste. Full Pride. Full Tilt."

Being that it is, at base, a wheat beer, and some cloudiness is inherent in the style, I agitated it in the bottle and placed it back in the reefer for a few minutes. Once it calmed back down, I Pop!ped the cap and began an aggro pour. The resulting three fingers of fluffy head had a yellowish-white cast before falling, leaving some nice lacing in its wake. Color was a hazy, bordering on cloudy, Golden-Amber (SRM = > 5, < 7). Nose was redolent with raspberries and I was transported back to my late paternal grandmother's backyard garden with its red raspberry bush. Mouthfeel was soft, medium, but soft. The taste was of raspberries, but not necessarily a natural taste, but instead, more candy-like. This speaks to the hazards of using artificial flavorings - they are no substitute for the real thing. Finish was semi-sweet, pleasant, refreshing, but probably more appropriate for a hot summer's day.

Appearance: Pours a cloudy orange color, with reddish traces. The head is a finger high and white in shade. Retention doesn't seem particularly special, but a little collar is left on the glass, as well as a bit of lacing. (3)

Smell: This has a massive raspberry note, but it's around a 6/10 on the "natural" scale. It also smells incredibly sweet, as expected. The nose is pretty typical for the style - fruit dominates, leaving the wheat backbone left in the dust. (3)

Taste: On the taste buds, the raspberry notes seem to be an augmentation to the wheat malt base, rather than overpowering entirely. I also pick up a lot of yeast on the back end, throwing everything else off. The level of fruitiness is right - I just wish the whole thing was structured more cohesively. (2.5)

Mouthfeel: Really full bodied for the style, yet respectably dry finishing. It's reasonably easy to drink, but not effortless. It doesn't seem to have ridiculous carbonation. (3)

Overall: This is the first Full Tilt beer that I don't like. It's hard to explain why, though...maybe it just seems out of balance to me. I will not be seeking this out again, that's for damn sure. (2.5)

2.7/5: An underwhelming offering from a rock-solid 'brewery'

This beer is what it claims to be. A light refreshing American-style raspberry wheat beer. It utilizes raspberry extract which is typical of non-lambics, but the extract tastes as natural as you will find anywhere. The base (malt-bill) of the beer is smooth and finishes out to 5.2% ABV. The appearance is hazy from the non-filtering of the wheat. Overall this is a good summer beer if you are trying to scratch that fruity beer itch.

This beer will be perfect for the warm weather that seems to finally be arriving. The raspberry aroma reaches your nose as soon as you bring it near your face. The fruity flavor is well blended with a smooth wheat body. The taste is more subtle than other fruit beers and lends itself to be enjoyed over and over again without being too sweet to become overwhelming. If you're looking for a smooth, refreshing, fruit beer on a warm spring or summer day look no further.