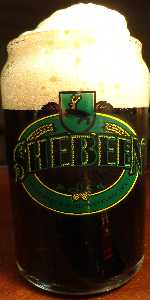 Poured from a 12 oz. can. Has a black color with a 1 inch head. Smell is mild, roasted malts, hints of chocolate. Taste is roasted malts, hops, some smoke, very light chocolate, easy drinking. Feels medium bodied in the mouth and overall is a decent beer.

Poured into a shaped pint glass: color is black with dark edges, head is darker tan with a big initial presence then even a lingering top of at least 1/2 inch; some head lacing down the glass sides.

Smell is pleasant with a nice roastiness, subtle coffee and dark chocolate notes, piney/earthy hops on the finish.

Taste is also nice with a lean towards roasted malts and dark chocolate bitterness, hop bitterness is noticeable but not dominant other than overall bittering presence; some toast and coffee flavors noted as well.

Mouthfeel is moderate with crisp carbonation and bitter roasted malt flavors balancing the sweeter malts that could originate from a deep malt bill for this style; hop bitterness seems to drop off from nose to mouthfeel.

Overall a nice take on the style with a lean towards roasted malts with diminishing hop presence.

12 oz can served in a lager glass.
Pours dark brown with a large, durable tan head.
Unlike too many black IPAs, the dark malts and hops in this one blend nicely rather than competing. Moderate bitterness with a medium-full body.

J. Alexander of Woodbury sent me one of these in furtherance of The CANQuest (tm) and I am always thankful for such things.

From the CAN: "Fresh Beer Crafted in Connecticut"; "Our darkest beer, made with special blackened grains that don't make the beer taste burnt. The Cascadian style India Pal Ale is balanced with sweetness, hop bitterness, and aroma. Goes great with salmon. Slainte[.]"

I had no salmon on hand so I proceeded with the Crack! which released foam through the vent and caused me to have to wait before proceeding. It was undeniably an active beer, but I attempted an inverted Glug anyway. Wow! Beer began to fountain out of the CAN and I immediately backed off to allow things to settle down. Once this happened, I was left with a finger-and-a-half of dense, dark-tan/light-brown head with great retention. Was I ever going to get to drink it at this rate? Given the almost imperceptible light penetration at the bottom of the glass, I am going to characterize color as Black/Opaque (SRM = 44). Nose had a light smokiness and a definite chocolatiness. Mouthfeel was medium-to-full, not quite creamy. The taste was quite chocolaty, more like dark chocolate than what the nose had led me to expect. Once again, stylistically, it was spot-on, but what had happened to the all-important hops? Finish was dry and bitter, but I remain unconvinced that the hops played much of a role.

Notes from 12oz. can, very malty for an ipa style beer. Enjoyable but nothing amazing.

SAmpling a cellar temp can poured into a pint glass. The beer pours a dark cola brown with frothy beige head that almost overflows the glass even with an extremely gentle pour.
Aroma is grassy and some pine hops with a bit of chalky chocolate mixed in the background.
First sip reveals an average body with smooth texture and very fine and tingly carbonation.
Flavor is molasses and roasted malt up front and some slightly bitter grassy hops that linger on my palate after each sip. Very dry finish and definitely some bitter bite. Not from booze but a good hop smack on each swallow.
Booze is hidden and the beer is very drinkable. A well made black IPA from a nice CT brewery. Well done!

12oz can. Pours a very dark brownish black with over an inch of frothy khaki head.Tons of lacing. The aroma is citrus hops, chocolate, and roasted malts. Hint of coffee. The taste is citrus peel, roasted malts, and chocolate. Charcoal with some piney notes. Earthy. Finishes with some more roasted malts, smoke, and coffee. Very roasty Black IPA with a fair amount of hops. Lots of carbonation. Overall, pretty decent canned Black IPA I will buy again.