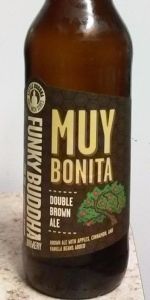 Poured a brown, almost black, body with one-finger head and lace patches. Aroma has notes of apples with vanilla and malty sweetness. Sweet vanilla taste with a bready apple sweetness and spicy finish in a well-balanced beer that is easy to drink and very enjoyable.

T- prominent flavor of baked cinnamon apples up front, just as in the nose. Mid-palate gives a malty sweetness that adds caramel & vanilla, fig and raisin. The finish brings out more cinnamon apple and lingers of sweet brown malts

O- the cinnamon apples match well with the malty base of the beer, while not being too strong. High drinkability and well balanced

This is a fun one to drink. A really deft touch with the cinnamon and apples. Worth a purchase when it’s around.

Would have gone higher but a little heavy on the cinnamon.

A mahogany body with a tall butter colored head, 3 fingers.

Oops. This bottle is infected. Damn. At least i hope it is (I would hate it if this were how it normally is). Cinnamon and mushy apple are there but kind of artificial. But there's sour milk, burnt brown sugar, old hop, and burnt alcohol mucking it up. Its gross.

Feel is hot and carbonated.

Cutting this review short. Maybe some time I'll get one that's not infected.

Reviewed from notes. Poured from a 22 oz. bottle into a J. Wakefield Brewing teku glass.

A: Pours a very hazy, though still slightly translucent, rich brown. Low visible carbonation, and a under a finger’s worth of tan head that fades quickly.

S: Cinnamon and vanilla, toasted malts – seems fairly sweet. A touch of the cardboard I get from brown-roasted malts. Bits of dark fruit and cinnamon apples as well.

T: Cinnamon up front, with sweet toasted malts and vanilla. I guess apples…it still tastes just as much like dark fruit (raisons, etc.) to me. Sweet fruit persists with the cinnamon in the hang – more apple flavor comes out as it sits on the palate after the swallow (and as it warms).

M: Full-bodied for a brown ale, but maybe a touch lighter than most “double browns” I’ve had. Alcohol content seems restrained, though there’s a bit of alcohol heat after the swallow. Low carbonation sensation.

O: Not objectionable, and better than I remember it being the last time I had it on tap at Funky Buddha. This might be as good as an apple/vanilla/cinnamon brown ale could be…it’s still just not my favorite beer though.

With a medium, round body and soft carbonation, this semi-dry treat starts on the palate with sweet apple, nearing caramel apple, with some light cinnamon and vanilla, biscuit, and a plum-fig-apple butter type flavor.

22oz bomber as an extra from my El Cat trustee. Thanks Jake!

The sweetness of the cinnamon and apple hits right from the start but mellows as the brew warms. A nice char, caramel, apple and cinnamon/spice take over.

A nice brown ale with adjuncts.

A- A very dark brown, almost black, with a two finger mocha head

Flavor is similar to the nose, with plenty of cinnamon, syrup, and vanilla, as well as the same roasty notes. Too sweet, which isn't surprising for Funky Buddha. An entire bomber of this might put you into sugar shock.

Big, full bodied beer, but aside from lightly influencing the flavor, there's no hint of the alcohol. The only thing restringing your rate of consumption is the sweetness.

Look- Dark cola with a light tan head
Smell- Apple, vanilla, caramel, toasted malt. Very unique
Taste- apple is the first taste followed by hints of vanilla and caramel
Feel- light to medium bodied. Much lighter than expected
Overall- Unique beer that is fantastic. Short and sweet it tastes like a caramel apple