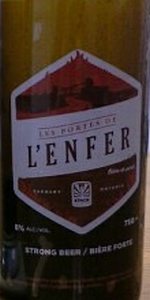 Appearance: Poured with a finger of head that did produce some lace but sadly didn't stick around. The body is a deep orange that at times reveals a browness to it and boasts a solid amount slow and steady carbonation.

Smell: There is a mild bicuit malt present with a hint and an almost dry salty beach sand smell, which I found a bit peculiar. Warming didn't really help its case out and bring out much of the smell either. Nothing bad, just kinda akwardly lacklustre.

Taste: An almost prune like begining backed by toffee malt that then turns to a more lighter biscuit, almost shortbread note with a hint of whisky which rounds out with a more caramel note backed by some earthy and grass hops.

Mouthfeel: The earthier aspect of the hops lingers a bit too long and tends to build on itself as your drink it, and it leaves an almost wet dust aftertaste. It's kind of a shame because the transition and carbonation are done exceptionally well. Only thing though, you can sorta sense a bit of the higher alchohol during that whisky note, but I think that's what they were going for, so no harm no foul there.

Drinkability: Apart from the aftertaste reigning this one in a bit too much, I'd say it's pretty easy to drink. Light bodied and easy on the system with enough flavour to be interesting and enough of a punch to get you into the danger zone quick.

Final thoughts: For the most part, I'd say a positive experience, but this would be an "On the way" drinker meaning if I was on my way to Sudbury or nearby I'd pick it up, but I really wouldn't go out of my way for it. It's a perfectly serviceable beer which is worth a thumbs up.

Appearance: It has a nice copper/amber color to it. It has a nice off-white head that dies down moderately and leaves some lacing.

Smell: The aromas definitely give out hints of dark fruit, buiscuity/bready malts, sweet caramel and some toffee.

Taste: Like the aromas, it has some dark fruit upfront, buiscuity malts, some breadiness, sweet caramel, toffee and a very faint nuttiness.

Drinkability: It's a very smooth drinkable beer accompanied by good flavors and aromas.

Barely open over a year, Sudbury's Stack Brewing has a winner here...this rich red fires on all cylinders and scored big at the Canadian Craft Brewing awards...I brought a few cans to friends in the UK and they were rightfully impressed. Available in multiple formats, this is clearly their best beer.