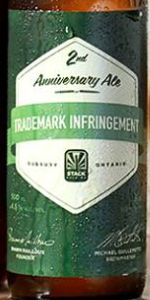 Appearance: Poured with a finger of head that did not lace or retain. The body is a cloudy yellow with notes of green oddly enough as the light reflects on it.

Smell: A very strong wheat malt presence, which has a lemon citrus note. That's really it though. It's just so dominant that there's nothing else that shows up. Warming only brings it out more.

Taste: Mild but nice, lemon citrus permeates the entire beer as mild wheat malt, and the barest notes of herbal hops make their presence known. A little bit simple, but good none the less.

Mouthfeel: The carbonation turns flat after a while and there is a bit of a stronger acidic presence in the beer, but apart from that the mild transistioning, smooth crisp taste and only a light lemon touch for an aftertaste makes up ground.

Drinkability: This would be an awesome summertime drinker. It's refreshing in extreme, easy to drink, mild and easy to keep down. That said, it's simplicity is also it's downfall here, as I wouldn't feel this is complex enough outside that environment.

Final Thoughts: I'm pretty sure this is my first encounter with Gose, and for the most part it was positive. It's like a cross between a lager and a wit, making it very easy to drink and simple, but also not overtly complex. All in all, I certainly want to try more of the style, and I would say this was a good experience, so yeah I'd say give it a whirl.