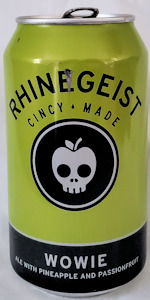 Notes: Meet the wild child, our tropical troublemaker with effervescent intentions. This ale pairs bright pineapple with apple and tart passion fruit in a sensual carimbo. Make the getaway, destination unknown, set off into sparkling skies. Let's get out of here. The possibilities, the thrill, the adventure; Wowie.
View: Beers | Place Reviews
Reviews: 11 | Ratings: 52 | Log in to view all ratings and sort

Snifter. Got a bunch of these cans as a gift.

A - Bold gold color, with short head that fizzes out quickly and leaves a bit of white lacing.

T - Apples, pineapples, honey and syrup, reminds me of like sparkling apple juice.

O - I did enjoy this one, basically downed a few, it was smooth and tasty, kept going for more. It was good, not earth shattering but still good.

T - Pineapple and apple from start to finish and ends on the sweeter side.

A - Pours a slightly hazy amber gold, still mostly transparent. Head is short on the pour, quick to fade, and only a bit of a wispy cap remains. No lacing to speak of.

S - Big hit of tropical fruit, mostly the pineapple, with just a bit of malt and floral hops.

T - Follows the nose, with a big juice open. The middle reminds me of a cider, with tartness and lingering fruit. The pineapple becomes most distinct in the close, where it trails out with sour notes and just a hint of bitterness.

M - Brisk carbonation, light weight, and just dry enough in the finish. The main detractor is there is a slight silty feel, a bit of grit, and that does stick around after the close.

O - Quite tasty, mostly refreshing and drinkable for 6.2%, but with a slightly odd profile and feel. Call me a bit mixed as a result.

Purchased as a single can from Marathon for $.99. Poured into a tulip glass.

Pours a 50/50 transparent-opaque golden blonde with a creamy cap of 2 fingers leaving lots of lace behind. The f**king legs on this thing though. For serious. Sip it and watch the show. kRaZy!!

Aroma of green apple skins but actually smelling closer to acetaldehyde; some real heavy notes of skunked malt liquor; and slight fruity effervescence that tingles the brain with suggestions of passion fruit.

Flavor is pilsner malt and sparkling white grape juice. Hints of apple chardonnay. Heavy emphasis on apple skin. Perhaps, even applesauce-ish. Slight scallion. Finish of dried apples and Chardonnay. It's not complex, but it is rather apple-focused which makes it simple and semi-enjoyable.

The mouthfeel continues the sparkling wine agenda, nearly indistinguishable from it. Some dryness on the finish, also indicative of the former, but with zero alcohol heat. Very carbonated.

Overall, this comes across more like a sparkling apple wine than an ale of any sort, and I have no doubt they got some of that ABV from the fruit. There's just that fermented out dryness present in most sparkling wines or ciders. It reminds me a little of Redd's Green Apple Ale, but less sweet and far drier. Definitely worth a skip if you're on the fence about it. In fact I'll bet dollars to donuts it won't blow your skirt up. However, even though it's firmly below-average, I can still see a place for it - a boat or lazy river float.

Poured into a tall clear pint glass. Appearance is a light golden body which is clear, almost resembling of apple juice in a way. Thin white head that dissipates rather quickly, and there's not much lacing.

Smells sour. Notes of tarty apples, pineapple, passionfruit, and even some lime juice I think.

Taste is tart and sweet, and a little bit sour. Tasting apples mainly along with some good pineapple juice, and other citrus notes like orange and lime. Body is light.

As a fruit beer, this one seems to have hit the brewer's intent. It won't appeal to someone looking for a beer experience, but should please those who love apple juice and cider flavors.

Wowie brewed by Rhinegeist Brewery, with an ABV of 6.20% This Fruit an Field brew pours out a nice golden amber color with a nice white head. There is some lacing to this brew, it sticks to side of the glass well. The smell is sweet an sour with lots of pineapple mixed with out fruits. You also pick up on a nice amount of grains and malts in the smell of this brew. The taste is bitter sweet. Lots of tart notes in this brew. The body of Wowie is a solid medium. There is nothing overpowering about this brew, it has a nice balance to it. If you like tart brews. It is hard to pick up on the 6.20% ABV in this brew, it is just that smooth. The mouth feel is Bold, Sweet,Tart, Clean Smooth and Refreshing. Overall I am going to give Wowie a 3.75 out of 5. I would definitely look this brew up again giving the opportunity too. Rhinegeist Brewery, did a real nice job with this brew.

Wasn't really sure what to expect with this one, and I also didn't notice that it has the "Cidergeist" logo on the front (the skull-shaped apple) until I brought it home, so I don't know if it's supposed to be like an ale/cider hybrid (aka "graf") or something. Ah well.

Pours a completely clear apple-juice color (very low SRM amber, I suppose) with a fizzy head and sparkling carbonation. Welp, looks like a cider. Can't say I'm surprised, but I think Rhinegeist should be a little more upfront about their process when it comes to stuff like this. The front of the can says it's an "ale with pineapple and passionfruit," but the back sneaks in a note about apple in there as well. I think it's probably safe to assume that this is some kind of ale/cider hybrid, but I can't find any info about that on their site, so I'm somewhat lost.

The nose is definitely cider-like as well, with that heady sweetness from the apples combined with lighter tropical notes from the pineapple and passion fruit. I can also detect a little bit of peach and even generic "watermelon candy" elements swirling around. Obviously, this is very fruit forward and has just about zero to do with "ale" including a suspicious lack of yeast or malt characteristics from my first brush with it. It's kind of interesting and unique, but I also just... don't think it's beer.

Tart and sweet on the palate, with front-facing sparkling carbonation and an incredible pineapple flavor. The tropical aspects are really pushed, along with a light sour apple element and some of the deep passion fruit. The watermelon note I noticed from the nose makes an appearance here as well, interestingly enough, along with some white wine-like spritziness. It's kind of growing on me as I drink it and contemplate, but I just don't like the finishing cloying sweetness.

The mouthfeel is light and airy, with bristling carbonation and a mouth-coating sweetness that, once again, seems a little overdone. I would prefer a more balanced product, and, of course, it would also be cool to actually understand what the hell the brewery actually made here. As it stands, this is about one step away from not belonging on BeerAdvocate at all.

When the beach is calling, but so is responsibility, that trip to the islands have to be postponed. But it doesn't mean that the senses can't take a little vacation thanks to the mindful team of Rhinegeist brewers. Their fruit forward beer celebrates the tropics with a combination of apple, pineapple and passionfruit in a way that only suntan lotion can.

Pale gold and topped with a sprite and popping froth, the succulent perfume of tropical fruit and a hint of cream corn swirls about the senses in a cream based island cocktails kind of way. Sweet on the tongue, the taste of cereal and malt create a melange of sugars that hinge on simple syrups and powdered sugar.

As the malt influence trades sweetness for a tangy fruitiness, the intense taste of pineapple easily wins the battle for the middle palate. An undercurrent of regular apple esters, pear and white grape transition to a tartness of passionfruit, lime and gooseberry. A hint of white wine follows as the beer has a specific wine cooler character early and often.

Medium light on the palate, the tartness of fruit and the beer's tendency to dry further toward finish all suggest a beer that's both sweet and tart, much like a slightly alcoholic candy; keeping those wine cooler insinuations in mind.

"This ale pairs bright pineapple with apple and tart passionfruit"
12 oz can in a Tervis at the 2018 Dublin Irish Festival.
Amber body with a very good bone colored head. Yeast, passion fruit and pineapple in the nose. Good aroma but not quite as good as the flavor which is nicely tart and very fruity.
Smooth medium body and medium carbonation.

Wowie from Rhinegeist Brewery
Beer rating: 84 out of 100 with 52 ratings