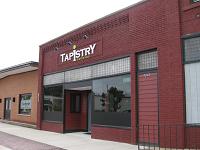 Friendly bar staff, fine ales, decent bar food, relaxed atmosphere. Room is a bit bright so it can get loud when crowded. ABV range is outstanding giving the drinker plenty of choices.

Visited this brewery on a recent trip to Michigan with my wife. Nicely laid out interior with spacious seating at tables and the bar. Food menu is well constructed and has plenty of options to pair with their beers. Well rounded beer list as well featuring multiple styles in order to fit various tastes. Would definitely go back to Tapistry.

Maybe it was just a slow day for him, but the bartender could not have been more disinterested in serving a beer. Accordingly we didn't stick around too long. Long enough to have one very good porter and one unnecessarily one-dimensional pale. (No malt backbone at all). The hummus, however, is outstanding. Must revisiti, but this visit was a resounding meh.

Love this place. Excellent beer, full selection, nice staff, awesone food. Have been several times, and while I don't understand why they don't have the lines they do at Greenbush, I am selfishly glad. Reactor Coconut worth a trip as was the cashew hummus cashew wrap. As a mostly vegetarian, really appreciate non meat offerings and my husband thought the pork sandwish was terrific. Mostly, I love their beer which tend towards dry finish. Looking forward to going back.

Bar is not very large, but the staff are very friendly, and the food was good. All the darker porters and stouts I liked a lot. A little gem off the beaten path you should stop by.

Vibe - nothing special, but it was a good local bar type of feel. cool space though.

Quality - I preferred the IPAs, but got a nice sampler and it varied. Nothing HORRIBLE, but a few good beers. The English Robust Porter was quite delightful.

Service - I am giving some props here since the bar tender got SLAMMED as he was working alone and the head brewery came out to assist. Got to chat with the guy and he was quite friendly. Keep up the great work.

Selection - quite a few to choose from and by the looks of the taps lots of room to expand.

Food - for just some sandwich place I enjoyed my wrap quite a bit.

Overall - great highway stop and good place to swing by for a pint. another great example of the local watering hole is now a microbrewery...

Nice brewery not to far from I94. Pulled pork sandwich is very good. Very good beer selection. Two beers not listed on BA, Street Walking Cheetah (white IPA with orange peel/corlander) I give it a 3...Heart Full of Napalm (Double IPA)...a strong 4.

It's a cool place with a great staff. Weather permitting they have an outside area in the back where you can throw bags or cornholoe. They have a limited food menu, but what they make is awesome like house cooked pulled pork, or my favorite the brewben made with Smoking Goose pastrami, locally baked bread, kraut and sauce,good stuff. Again, the staff is awesome and will give you as many samples as you want, they're all about you trying their beer, which they usually have 20 of on tap. They do growler fills but don't bottle, I think they did 1 limited release of an okay DIPA. Overall, a cool place to stop, AND it's pretty close to Weko beach, Warren Dunes and I-94.

This brewery just opened two weeks ago, so my wife and I put it at stop #2 on our 4-stop pub crawl this day. Consequently, we didn't want to drink much, so we had just a flight ($8) of 5 of the 15 beers that were available (plus we added two more samples). The brewery is on the main street in this tiny town, and we arrived in mid-afternoon so it was not busy. The interior is an average-looking pub setting with a long bar and a number of tables/chairs. A large window behind the bar allows a good view of the spotless stainless-steel equipment. The beers are listed in three tiers and are priced accordingly, $4-$6 along with the serving size, 12 oz. for the stronger beers and 16 oz. for the other pours.

We liked each of the 7 beers that we sampled. The IPA had a slight butterscotch after-flavor (diacetyl?) as a flaw, but my wife could not detect it like I did, so it is a minor issue. Each of the beers was brewed fairly close to style, so for being a new brewery, the brewer has the beers dialed in about right. Some tweaking is likely to occur and improvements made, so future visitors should have a treat in store. Although none of the 7 beers that we sampled were able to knock our socks off, I'll still give the beers an overall grade somewhere between a B and C.

We did not try any of the food, and we didn't see any being ordered by any of the other patrons, so I can't comment on the eats, other than to say that there are 4 sandwiches on the menu, plus 3 snack plates.

Before writing this review I checked the brewery's website again for some details, and I noticed that they just opened a beer garden, which must be behind the brewery because the pub is in a storefront setting with other businesses on both sides of it. I'd go back here someday just to sit in the beer garden and drink some more of their beers.


Tapistry Brewing in Bridgman, MI
Brewery rating: 3.81 out of 5 with 782 ratings