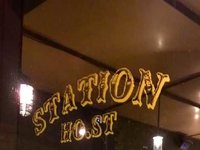 View: Place Reviews
Reviews: 8 | Ratings: 14 | Log in to view all ratings and sort

This is indeed the "Hopfenstark" bar. I was lucky enough to run into the brewer/owner one day and pick his brain about a lot of different things regarding the beers and brewing.

It's got a very basic layout: rectangular room with the bar on the right and bathrooms in the back. It's kind of sparse but with enough wood (lots of wood!), exposed brick, and interesting items like the cattle skull that it works - it's supposed to be sparse and open. Were they going for a western theme? Based on the font they used for the logo and the cattle skull, maybe. Let me not forget the terrace out front - perfect for nice weather!

Anyway, the beer is great, you can look through the reviews to get a better idea; and they now do some distilling as well. They also have food, which is fairly uncommon, and it's quite good. Music and other events just round it out. It's a wonderful hang when the right group of people is there.

I have three favorite places in Montréal and this is one of them. Highly recommended!

I like this bar. The vibe is cool with an edgy/alt-hip vibe (simple rough wood furniture, TV playing cartoons/so-out-it's-in movies - NO SPORTS), loud lively music. House beers from Hopfenstark were just average but a nice variety of styles.

This is a solid bar offering a variety of Hopfenstark beers in a relatively nice setting. It is basically a big, longish wood room with a bar, some tables and additional seating and a big projection screen. The house beers are good and are in a wide variety of styles and they additionally have some private import stuff as well as a handful of beers from other Quebec brewers. The coolest thing here is that they have a tap system that utilizes different temperatures. This is a welcome change from other bars on the island. Especially for their bigger, darker offerings. the prices are par for the course (maybe a touch higher than some places) and the quality is good. I'd visit more if it was closer to my house (as with most places).

Stopped by here with JLindros on the trip through Montreal. Place was a very long, deep rectangle with a few tables mixed in. Wooden floor, long wooden bar. Took the bartender nearly 15 minutes to come over when we were two out of the 6 people in the entire place. No customer banter, just put the beer list down in front of us. Took nearly 10 minutes for him to come back and ask what we wanted, and nearly 5 minutes to get our beers. Never came back over to see if we liked them (which we didnt, really was tempted to take my glass and bring it in to the bathroom and pour it, it was that bad), or if we wanted food or anything. Had to get his attention for a check. With all the great brewpubs/bars/taverns in Montreal I see no reason to come to the Hopfenstark , especially when Cheval Blanc and L'Amere a Boire are right down the street.

Modern wood heavy bar, long wooden bar old wood, tables too, very plain and boring. Slow service, not too friendly. 20 taps, so so looking beers, the couple we had were either OK or terrible. A little hipster feeling. Not a very fun place to visit, especially down the street from Cheval Blanc and L'Amere a Boire, there is no reason to visit this place at all.

After a rather drab experience at Cheval Blanc, I decided to stop in Station Ho.st, as it's right within walking distance. I walked a bit too far, and didn't even see it across the street, and after asking directions at a gas station, and getting no help from at least three people (bearing in mind it was literally right down the street), I finally wandered into the place on my walk back. Derr.

Anyway, there was a pretty good atmosphere here. Intimate and comfortable. A fairly small place, with a medium bar with a lack of adequate bar seats. I just stood at the bar for a while until a seat opened up, no problem. There beers I had here were pretty good for the most part, from what I can remember (see next paragraph). Good selection, with an emphasis on saisons. The bartenders were pretty on the ball as far as service went, though the guy I had was a bit gloomy and not very talkative.

Fortunately, as I sat there, I was approached by the owner, who just randomly started working the bar. He asked where I was from, etc., and we quickly got into a pretty good discussion about the beer scene in general...and then he started giving me samples. And more samples. Bearing in mind I'd now been awake for about 30 hours, and had two full pours at Cheval Blanc, and a few small pours here already. After a while, I had a good concept of Hopfenstark's beers. I was also pretty much full-blown wasted, which is actually a rare occurrence for me.

There were some food options here, which judging by the rating system, must be something relatively new. I don't think there's an actual kitchen, but I ordered a pull pork sandwich, which was basically just made in a microwave by the bartender. Obviously nothing gourmet, but considering I hadn't eaten in a while, it was good enough for the moment.

Overall, this place was a good time. I'd definitely revisit if I found myself in the area again.

This is essentially a taproom for Hopfenstark Brewery, which is just outside the city, though the list of about twenty taps includes guest beers. I visited a couple of times while in Montreal recently--both early enough in the day that it wasn't yet crowded.

The bar and furniture are rustic wood, and the decor is minimal. Tasteful and immaculate.

Fred--the Hopfenstark brewer/owner who opened this place last fall--worked behind the bar. He's friendly, very enthusiastic about the beers, and was quick to offer samples--particularly of some mixed-style beers he had created.

Some of the beers were outstanding--the saisons really shined, and were better than their BA ratings suggest. And even the beers that weren't my favorites were still quite good.

Station Ho.st doesn't have a kitchen, but you're welcome to bring food from nearby restaurants.

This is the least-BA-reviewed brewpub in Montreal, so far, and it deserves to be on the map. It's an easy walk from L'Amère à Boire or Le Cheval Blanc. Go. Visit.

Bar opened by Hopfenstark's Fred that predominately features Hopfenstark's brews but also a few guest taps, last night there was DDC and Broadway. Over 20 taps makes it interesting though small qualm; all their regular line-up was there but nothing special or no one-offs. Still, lots of choice. Place is no frills and has wood paneling everywhere. Probably couldn't hold more than 50 people so it is a bit small. I expect great things from this place in the months to come.