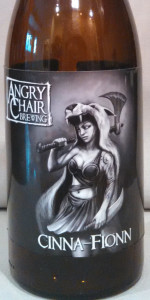 S: Huge cinnamon. Some caramel and vanilla, coffee and toasted malts. A modest hazelnut blends with the coffee. But mostly fresh cinnamon churros and snickerdoodles. Nice, but certainly cinnamon forward.

T: Cinnamon, vanilla, and hazelnut. A medium toasted character to the biscuity brown malts. Coffee and mild chocolate and a touch of caramelly sweetness. Maybe just a hint of the maple syrup in the sweetness as well. More dry cinnamon with the hazelnut at the swallow.

M: A nice heavy body for a porter; as an "Imperial Porter" I don't think it's crazy thick, but it certainly stays sticky. The alcohol presence is hidden well. Average carbonation sensation.

O: A solid beer, but certainly not my favorite from these fine gentlemen. It comes across as adjunct heavy over an above average base. If a cinnamon hazelnut porter sounds like what you’re looking for, you could do worse for sure. But this isn’t hitting all of my good buttons tonight.

Reviewed by gibgink from Missouri

Pours a bowl color with a one-finger creamy off-white head that has good retention. Smells of hazelnut up front, but not as strong as regular Fionn, as well as a big hit of cinnamon and herbal coffee. Tastes of an even dose of cinnamon and hazelnut up front, with undertones of coffee and caramel rounding it out. Medium body with medium carbonation leads to a foamy mouthfeel that continues into the finish. Solid overall, but the adjuncts seem to be the only thing popping out.

Reviewed by sorthcj from Florida

The appearance is dark brown with a small head.

The nose is coffee, hazelnut and slight spice.

The taste is strong coffee with hazelnut lingering between the cinnamon and vanilla characters. Perfectly balanced.

Mouthfeel is quite lite as expected and easy drinking.

I'm not a fan of cinnamon however this brew is perfectly balanced and delicious.