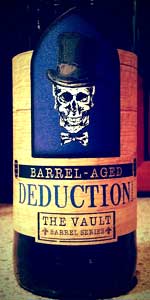 Notes: Unlock THE VAULT, our barrel series committed to the careful, prolonged conditioning and blending of barrel-aged ales. Claim a limited release Deduction dubbel, aged in bourbon barrels and blended to feature smooth, sweet and complex notes of raisins, caramel and vanilla. Good things come to those who wait; enjoy immediately or store under lock and key.
View: Beers | Place Reviews
Reviews: 6 | Ratings: 31 | Log in to view all ratings and sort

Look: Barely translucent, murky dark brown to reddish brown in the light. A lot of visible carbonation streaming up the sides of the glass. Khaki colored head settles to a thick ring around the edge of the glass and a thin layer of foam/sporadically placed small and large bubbles atop the beer. Really has that nice Belgian murky brown color

Smell: Sweet, fruity esters and spice. Definitely a yeast driven aroma. I get some brown banana sweetness along with nutmeg and allspice. Other dark dried fruit including figs and dates. In addition to the yeast, the bourbon barrel has an impact on the aroma too. Soft and sweet bourbon. Natural vanilla and hazelnut sweetness. I wouldn’t expect so much sweetness on the nose from a Dubbel. Thinking about the ripe banana aroma here, but the BBA could amplify this aspect.

Taste: Driven by dark, dried fruit. Figs and dates again. The bourbon barrel adds a nice layer to the beer. Some nutty vanilla and raisin sweetness. I still get some banana on the flavor. Not as spicy as the aroma but still getting some hints of nutmeg and allspice.

Feel: Medium level of carbonation. Smooth and a bit warming at 8.5%. A little sticky sweetness on the lips. Both aspects I enjoy in a dark, high ABV Belgian beer.

Overall: A really nice iteration of the Belgian style Dubbel. Warming at 8.5%. Dark dried fruit, spicy, vanilla, some ripe banana pushing the sweet fruit boundary, but not over the top. Nutty and woody. My favorite non-sour beer from Taxman. Nice stuff

Slipping in Some More Happy New Easter IndiCANa Beer Sunday (Week 739) Since I CAN! I am now playing "Beat the Clock" but I have a couple of last CANs that I want to get in before the thread closes for the week. I had originally received this one from @jkblr but it became a shipping casualty & I wrote it off. See what I did there? While at a monthly bottle share, the person who brought this one bequeathed it to me, knowing of my affinity for Taxman BC without any knowledge of the original's untimely demise. How cool is The CANQuest (tm)?

From the CAN: "belgian-style dubbel ale aged in bourbon barrels"; "Unlock THE VAULT, our barrel series committed to the careful, prolonged conditioning and blending of barrel-aged ales. Claim a limited release Deduction dubbel, aged in bourbon barrels and blended to feature smooth, sweet and complex notes of raisins, caramel and vanilla. Good things come to those who wait; enjoy immediately or store under lock and key."; "Declare Yourself"; "The Vault Barrel Series"; "Belgian Inspired American Crafted"; "IBU 20".

I get giddy at the sight of all of these CANs! I "discovered" Taxman BC through my now-lapsed Tavour subscription, but I got really lucky in finding a couple of IndiCANapolis traders who routinely hook me up with both Taxman & Daredevil BC beers. I CAN't remember who sent me this one, but it is greatly appreciated!

I beCAN with a Crack!ing open of the vent, followed by a slow, gentle, C-Line Glug into the snazzy goblet from @jkblr who keeps ratcheting up the ante with every shipment! 8=O Imagine my surprise, shock & disbelief upon CANming upon an unlabeled gift box, opening it & discovering such a gem! Merci beaucoup. I really love the way that their CANs are almost always brimful! It is like getting a beer Baker's Dozen. It foamed & fizzed, but as usual with them, head retention was minimal. It formed just under two fingers of fizzy, foamy, rocky, light-tan head with marginal retention. 8=( Color was a stunning Brown to Dark Brown (SRM = > 22, < 27) with NE-quality clarity & ruby highlights. 8=O Nose was unquestionably of Bourbon & now my mouth was beginning to water. Mouthfeel was medium, but I was left wanting, as though it should have been bigger & fuller. The taste, while Bourbon-y, was more muted than I expected from the nose. I had the same bugaboo with their Gin Barrel Aged La Maison, as you CAN see by looking up my review. I guess that they are somehow gun shy & pulling the trigger too early in the aging process to be to my taste. The potential is certainly there, but I want more Ooomph! from a barrel-aged beer. Finish was semi-sweet with a bit of alcohol heat drying things out, but not o the point of semi-dryness. I look forward to running through ALL of their CANs, eventually. YMMV.

12oz canned 2/26/19 (26 days ago) poured into a Taxman snifter at just above fridge temp 8.5% ABV 20 IBU. The beer pours bright medium brown in color with fizzy light brown head. The head recedes to a thin island of bubbles and ring around the glass. The aroma is oak and vanilla first with bourbon following along with some dark fruit. The taste is dark fruit and soft malt followed by vanilla, coconut, oak and mild bourbon ending with gentle bitterness and lingering coconut & vanilla. The mouthfeel is medium bodied with just less than medium carbonation and a dry finish. Overall, very good to excellent. This is a really nice version of Deduction. The barrel really adds dimension that the base beer lacks without overwhelming the beer with bourbon.

Poured from a bomber into a snifter. Pours a very dark brown with a slight head. It smells of plums, brown sugar and booze. The taste is pleasantly complex, raisin, stone fruit and malt jockeying for attention, then again booze, but nicely so. Full rich moutfeel; very nice cold weather beer.