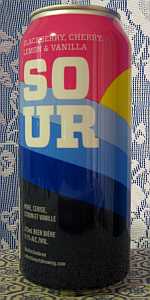 Pours dark purplish-pink colour, a little murky but still translucent, taking on a brilliant magenta hue when held to the light. One finger of foamy, pink-tinged head settles off in less than two minutes' time, leaving behind a tight collar and a few wavering lines of lace. Very attractive in the glass. On the nose, I'm getting a tart note of lemon and raspberry yogurt, as well as a mixture of cherry, red grape, blackberry and vanilla. I'm also getting a very slight suggestion of something along the lines of cider vinegar.

A yummy little sour, with good balance between the fruit ingredients, the vanilla and the underlying sour itself. Blackberry and raspberry are apparent right off the bat, whilst the lemon and lactic acidity providing a moderate baseline sourness that permeates the entirety of the flavour profile. Together with a touch of lactose sweetness, hints of cherry, yogurt, sour apple and vanilla round out the back end of the sip; more lemon/yogurt/berry flavour carries through into the aftertaste, which lingers for a second or so after each sip. Light-medium in body, with relatively low carbonation levels that meekly brush against the surface of the palate; feels smooth and a little slick on the tongue. I found this very easy to toss back, and wouldn't have minded another afterwards.

Final Grade: 4.12, an excellent A-. Collective Arts' Blackberry, Cherry, Lemon & Vanilla Sour is the sort of beer I'd prefer to be drinking on a hot summer patio in July, rather than indoors in February, but I suppose I'll take what I can get. The blackberry in particular really pops, which is great for me because a) I love that fruit, and b) its flavour does not always translate into beer all that well, especially when there's other, more strongly flavoured fruits in the mix. Well worth trying if you can still find it: I'll pick up another can or two while I can, and hope that it pops up again at some point.

On tap at Rio Tomatlan in Canandaigua, NY.

This one pours a reddish/purplish color, with a small head, and not much lacing.

This smells like exactly what the title says. It's not particularly complex, but it's certainly tasty. I'd want a bit more vanilla, as it's very subtle on the back end. Blackberry is the dominant flavor, so I guess the order they listed the ingredients in the title is accurate. It's mildly sour.

The acidity doesn't linger very long on the back end, with a good drinkability, and a very nice crispness.

This is fairly basic, but it's done well with no obvious flaws.

This is the version with lactose sent to the LCBO, which I understand is different. If someone else wants to post a seperate entry as per the other sites, I'll move it over. A balanced sour that's more tart and drinkable.

The pour brings to mind kool-aid fruit punch, with its vibrant ruby body. A sizzling, pink cotton candy head barely has time to form, clearing out within a minute.
Sweet vanilla, and raspberry, blackberry, red currant, on the nose. A sense of cream.
Flavour is full of berries and red, fleshy fruit - raspberry, blackberry, cherry, red currant. And yet, it doesn't feel naturally fruity, feels more artificial. Balanced sweet and tart, pleasant acidity. Unfortunately, it's verging on flat, with only a light tingle of carbonation.

The ingredients sounded interesting, but it falls flat, quite literally. Plenty of flavour, but lacking finesse, and it doesn't taste like real fruit. Skip it.