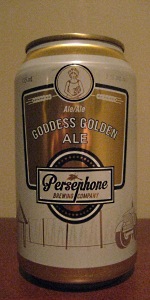 altstadt from Canada (BC)

Clear amber-gold color. Poured a short head of mixed bubble sizes. The head dropped down to a thin skiff in less than a minute. Low flow of medium sized bubbles from the bottom of the glass. No lacing.

Mix of sweet and mineral scent, then a scent of un-milled grain shows up. After it has aired out a bit, the malt starts to take the foreground. Swirling the glass kicked up a light, sweet barnyard and just a touch of hops.

Strong flavor of light malt; this is coming across with more of a raw grain flavor. Medium bitters with a medium vegetal hop flavor. A light yeast flavor shows up. Much stronger flavor overall than expected from the smell. The aftertaste is a clean, light bitter that gets stronger as it warms more towards the end of the glass.

Some tongue tingling as it builds to a medium bubbled foam. Just a faint touch of astringency.

Surprisingly strong flavor for a light malt. This reminds me of opening a bag of un-milled feed grain you would find on a farm, and maybe slowly chewing on a few grains like some people chew on a toothpick.

355ml can, part of a quartet of products from this brewery to recently breach the Alberta brew border.

This beer pours a clear, medium golden amber hue, with three fat fingers of puffy, densely foamy, and rather creamy off-white head, which leaves some sudsy continental drift lace around the glass as it gently subsides.

The carbonation is quite understated in its come-hither frothiness, the body an adequate middleweight for the style (or even the more appropriate one that I have in mind), and mostly smooth, the various edgy and bitter essences creating some dissonance here. It finishes rather dry, the biscuity nature of the malt in cahoots with the lingering noble hops.

Wow, one tasty and engaging golden ale, with more than a passing resemblance to a well-rendered ESB, IMHO. Totally something I could see taking a case of on a camping trip, if drinking the same thing all night was, ya know, still my thing.

Thanks Mike for bringing a "growlette" of this back from the coast for me!

Appearance. Pours a clear gold with almost a finger of white head that fades to a skim but doesn't disappear. Nice bands of lace left behind.

Taste. Again, light grainy malts and a decent grassy hop bite (much more than I expected). There's a little bit of light yeast as well but the hops are what stand out and taste quite nice.

Overall. Great stuff. Nothing extreme going on here (which is clearly the intention) but quite flavorful. A good session beer and very well done as far as the style goes..

Goddess Golden Ale from Persephone Brewing
Beer rating: 82 out of 100 with 22 ratings