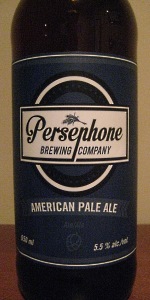 Notes: This medium bodied, light coloured ale is bursting with juicy citrus and tropical fruit aromas from Citra hops. The pleasant citrusy hop flavour and modest bitterness is balanced with a light malt profile. A sessionable beer for the hop lover.

S: Lightly floral, with a slight touch of citrus, and piney finish.

O: A pretty good pale ale. I enjoyed the variety of flavour and the notes of malt. However, as mentioned in another review, the characteristics seem a bit more like an English Pale Ale. Regardless, I'd recommend it, and will likely have this again.

Absolutely tremendous pale ale. Golden copper body with small but fluffy white head that laces decently. Floral, citrus rindy, crisp, and piney on the nose. Flavor is big and bold for a pale ale, on par with most IPAs. Pine, grapefruit, citrus rind, heavy, biscuity malt, green tea, and grassy notes. Wonderful flavor and balance. Feel is medium and highly carbonated, with pleasant, dry bitterness that lasts long after the swallow. Really, really great beer. If I still lived in the Vancouver area this would be a staple in my fridge, good for all occasions.

A hazy amber liquid, with enough clarity to see a few slow bubbles and some sediment, two fingers of dense foam has decent retention and leaves 5 distinct rings,looking good

T again its all iced tea, herbal tea, some spicy hops, reminds me of an English IPA, not all that "American" in my books

O not exactly what I was expecting, no citra notes, the hops are very tame, I'm guessing this bottle might be old but I'll never know for sure as I can't find any date on this one

I've heard good things about these guys but this ones not really blowing me away. A little pricey at 10$ a bomber maybe I'd give it another go if I new it was fresh

Nice, quite bitter right up front; a hard blunt pale ale rather than soft fruity piney. Even though it's more like an IPA its very likeable, maybe even better with food.

650ml bottle, another new arrival from this west-coast BC brewery to Alberta.

The bubbles are pretty low-key in their plebeian frothiness, the body a sturdy middleweight for the style, and kind of too edgy from the hops to be deemed particularly smooth. It finishes trending dry, the piney and citrusy hops paid to do a job, and a job it is they are doing.

A rather impressive version of an APA, the hops, as already noted, er, bringin' it, so much so, that the often blurry line betwixt it and an IPA almost seems to totally fall away. Tasty, engaging, and actually well-balanced, as the inherent malt exhibits a certain desire to not be overlooked. Worth giving a go, I gotta say.

American Pale Ale from Persephone Brewing
Beer rating: 88 out of 100 with 29 ratings