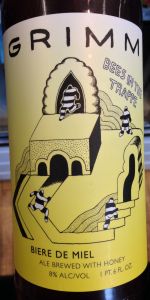 Notes: BEES IN THE TRAPPE is a strong, elegant Belgian-style ale brewed with a trappist ale yeast and clover honey. Pale orange in color, it pours with a rocky, snow-white head. Significant carbonation lifts delicate aromas from the glass: tart apricot, raw honey, cinnamon bark, and a hint of alcohol.The flavor follows the aroma, adding crisp malt reminiscent of honey-drizzled toast. Bees In The Trappe is light in body for its strength and finishes long and dry.Here are some pictures from our 2014 brew day!
View: More Beers | Place Reviews
Recent ratings and reviews. | Log in to view more ratings + sorting options.
4.59 by Gww1864 from New Jersey on Jul 21, 2016
3.86 by dar482 from New York on Nov 27, 2015
3.92 by BEER88 from Washington on Nov 08, 2015
3 by fosters9 from New York on Aug 24, 2015
3.92 by Janeinma from Massachusetts on Jun 30, 2015
3.5 by threedaggers from Kentucky on Jun 22, 2015
4.18 by Faxmesomehalibut from New Hampshire on May 02, 2015

I can think of only a couple beers made with honey that didn't also look like the stuff - Bees In The Trappe is not one of them. This nectarous amber ale looks like it were made by the bees themselves, except of course for the white suds spattered all across the glass.

For my money, Westmalle Tripel is arguably the best tripel in the world. This recipe uses the same strain of yeast which, for all intents and purposes, is kind of like every Belgian brewers' secret weapon. Of course more goes into a beer than just yeast - I could use it but that wouldn't do a lick to compensate for my poor brewing skills.

But in the hands of someone capable (or two capable someones as it were) a yeast jam-packed with such overt flavours of fresh bread, orchard blossoms, ripe fruit, and fresh-cracked spices... well, it can make something wonderful. The addition of clover honey only adds to this wealth of flavour (not to mention a more viscous mouthfeel).

So, taken all together, we're looking at a beer with a perfumed bouquet, intricate flavour of apricot preserves and pear compote, as well as a rich texture to match. But how does it drink? Impressively well for a beer of 8% and infused with honey (really sweet) and replete with phenols (really spicy). With such nice balance it doesn't put up any fight going down whatsoever.

Bees In The Trappe is not just a great name - it's a great beer too. For those still sitting on a bottle at home listen to the wise words of Ms. Nicki Minaj: 'Bitch, bust that open'. No, seriously. For as good as this is it won't be getting any better. Now is the time. For those who missed out, Grimm should brew this one again - lord knows it's good enough.

From the 22 oz bottle. Pours gold with thick head.

Taste is of sweet honey and malt with some fruity esters and spice. Everything is a bit muddled. The sweetness is cloying. Finishes with some astringent bitter notes and booze.

Not a great showing from Grimm. Maybe my bottle is off.

A: medium amber and hazed under a tower of off-white foam

M: soft and smooth, with the hum of carbonation and the battering of bitterness

O: tastes like Hopslam was poured into a tripel - a bitter honey pine ale, bringing American hoppage to a tripel's elegance - absolutely worth buying

A: The beer is clear golden yellow in color and has a light amount of visible carbonation. It poured with a finger high white head that gradually died down, leaving a large but thin patch of bubbles on the surface and a collar around the edge of the glass.
S: Moderate aromas of honey are present in the nose along with notes of yeast and hints of fruit.
T: Like the smell, the taste starts out with flavors of honey but has stronger notes of yeast and associated hints of spiciness, which lingers through the finish. No alcohol is perceptible.
M: It feels medium-bodied and a little dry on the palate with a moderate amount of carbonation.
O: This tripel is rather easy to drink for the style and has a nice balance between the honey and yeasty flavors. There is plenty of yeast to prevent this from being sweet.

t- Belgian yeast, sweetness, honey, sweet-tart (like the candy). something solvent-ester like that I can't describe. Clove? Sorta Heffe-Tripple

o- intriguing.. I enjoyed the bottle but would not seek another. The esters did not hit my particular palate easily. I spent a lot of time thinking about whether the last hit of flavor was tart or sweet. I drink Mead regularly, both traditional and new beer- mead fermentations. This was worth @ $9 at 8.00% abv if you have an adventurous Triple oriented palate and like honey.

O. Fuck yes. A delicious beer with a beautiful delicate honey sweetness to balance the effervescence of this big tripel.

On tap at the Tap and Mallet in Rochester, NY.

Pours a golden hazy honey gold color. Beautiful look to this one. Full and fluffy 2 inch head recedes slowly, leaving spots of lacing on the glass.

A good Belgian ale from a new gypsy brewery in Brooklyn. Would love to try all they put out now.

Bees In The Trappe from Grimm Artisanal Ales
Beer rating: 88 out of 100 with 33 ratings