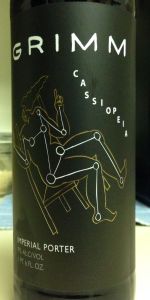 Notes: Cassiopeia is an imperial porter brewed for the onset of winter. Black as the night sky, our imperial porter is brewed from a blend of premium dark malts chosen for their complex caramel/chocolately/fruity qualities. Cool-fermented with a clean Scotch ale yeast that emphasizes malty richness and earthy, mossy aromatics-think of Cassiopeia as a Baltic Porter fermented like a Wee Heavy. This velvety, warming ale is surprisingly well attenuated, light on the palate and digestible.

L: Poured from a bottle to a pint glass. Had a deep, dark mahogany brown color and a thick, opaque consistency. There was a half inch of creamy, fairly long-lasting head. Very good lacing.

S: A decent, but not great, aroma of malt, chocolate, vanilla, an earthy quality, and caramel.

T: Tasted of a small amount of caramel (not a big component), a lot of malt (present throughout), some chocolate, a tinge of vanilla, and a light earthiness. This is a solid flavor, but it doesn't jump out at you. Some of the ingredients (i.e., the chocolate) aren't pushed quite far enough. Still, it has a certain charm to it.

F: A decent amount of carbonation with a smooth, somewhat dry finish. Medium-bodied.

O: An uneven beer with some good qualities. Worth a look.

Poured a black body with tan head. Candi-sugar and some roasted chocolate notes dominate the aroma. Smooth, slightly sweet, a little off-putting as this toasted chocolate sweetness balances with sugary maltiness and touch of vanilla/booze sweetness; ends up tasting more like a sweet smoothie more than a porter.

Walked into the beer store and the bottle and name looked appealing. I believe it cost me around $13 for the bomber. Very smooth, heavy on dark roasted malt. Hint of vanilla made it very drinkable, coffee is pretty overwhelming. Alcohol was present, but all of the combined flavors helps mask it. Not my favorite, but would consider buying again.

!0%ABV per 2017 bottle.Pours into a snifter a deep dark chocolate brown with a creamy deep beige head atop that settles nicely into a frothy mass.Chocolate and caramel malts stand out most in the nose,a tinge of coffee roast is detected as well.Wow this goes down easy,medium to fuller feel in the mouth with light carbonation.Flavors of chocolate,caramel, and underlying roast with a bit of earth in the back end.This is way to easy to drink for the strength with good flavor,well done.

Pours black with a thin tan head that dissipates to a ring pretty quickly and leaves minimal lacing. Smells of chocolate and roasted malts. Tastes of semi-sweet chocolate, caramel, roasted malts and a hint of lactose sweetness along with a bitterness that increases as the beer warms. Medium to heavy bodied, smooth and creamy mouth feel, light carbonation.

A: The beer is jet black in color. It poured with a short light tan head that died down, leaving a narrow collar around the edge of the glass and a large, wispy patch of bubbles on the surface.
S: Moderate aromas of dark chocolate and fudge are present in the nose.
T: The taste follows the smell and is mostly dominated by flavors of dark chocolate. There are faint hints of roasted malts and a very light amount of bitterness.
M: It feels little more than medium-bodied and rather smooth on the palate—especially coating your mouth—with a moderate amount of carbonation.
O: This beer is surprisingly drinkable considering its strength as it does a very good job at hiding any traces of alcohol from the taste.

A very smooth Porter. It has a nice dark chocolate look to it with a slower fading medium head. The body taste is smooth, as it masks the alcohol taste quite well for a beer of its ABV. The smell is lacking compared to some porters, but the taste is up there with some of the best ones I have tried. Definitely would buy again when in the mood for a winter porter.

the released on and bottled on part of the label is blank.

eyes...
2 big fingers of semi cocoa head, jet black, some bubbles lazily meandering up from the bottom, stick lacing paints down the sides of the glass, certainly looks like an impy stout

nose...
oddly grainy (odd for the style), chocolate notes, the grain note is strong and reminds me of fresh backed rye bread, some sweetness is also fighting for attention, interesting

taste etc...
nice and smooth, perfect velvet carbonation, the mouthefeel is just right there, full and foamy, almost guiness with nitro esque quality, the higher ABV is barely noticeable save for a smidge of the ole warm elbow to the gut, some chocolate flavors with a light cocoa powder finish, slight bitterness is detectable beyond the mostly sweet notes

verdict?
nothing about this beer speaks to me, but it is not a dumper, kind of a really enjoyable trip with no surprises, worth checking out for the tones where it steps outside the style

Cassiopeia does indeed look 'Grimm' - it's too dark and opaque to have a shadow. Named after a constellation, there's little brightness here; it looks more like the northern sky than any of its stars. Its drab, greyish head, however, does leaves a nebulae of lacing on the glass.

The aroma has plenty of biscuits, buttermilk, milk chocolate well as darker, more intense notes of espresso and burnt grain. It presents an awful lot of flavour without being too intimidating; I'm not shaking in my boots, but I am thinking this is a beer to be respected and not rushed.

The taste is even better and contains even more flavour than the aroma let on. There's Maltesers milk chocolates, fudge, roasted malts, and black coffee. On the whole, the flavour is rather milky-sweet (like chocolate milk) and has a Schwarzbier-like profile.

It'd be hard to make a better first impression than Cassiopeia; if ever there was a beer to convince me to try a brewery's other beers, surely this is it. It manages to conceal a great deal of character within an incredibly approachable, agreeable framework. It has mainstream appeal but also plenty of bold, craft beer character for those geeks out there.

Bottle purchased at Nathaniel Square Corner Store from a cool little gypsy brewery out of Brooklyn.

Pours dark as night, with a mocha-colored half inch head, that recedes slowly. Leaves some streaks of lacing on the glass.

Smells like chocolate, roasted malt, and vanilla. Maybe some oak.

Tastes pretty similar. Lots of chocolate flavor without being overpowering (I don't they added chocolate to this one). Milk chcocolate plays off of dark chocolate, with some milk campfire smoke, vanilla, no real hop bitterness to speak of. Dangerously drinkable for 9% abv.

As stated, goes down quite easy. Full, creamy mouthfeel, low carbonation but not flat.

I'm expecting great things from Grimm Ales- this dark ale is the grimmest of them all in look and flavor.

Poured from a 22 oz bomber into an over-sized snifter. The bottle had the ABV (9%) on the label, however on the breweries website it is noted as 9.3%. Not a big difference, but still thought I'd make a note of it. Printed on the lower right half of the label is "Release no" and "Bottled on", however they probably forgot to print the actual release number or bottling date, unless it has been printed using invisible ink. If you were to go to the website, it does say batch# 4.
Okay, moving on to what matters most:
A: Almost pitch black in color, with just a little light passing along the edges. One finger frothy
head that dissipates fairly quickly
S: Not much of an aroma to this porter, just some faint bitter notes. Perhaps with time the
aroma might develop, considering this was a pretty fresh bottle
T: This is very the beer scores big. Lots of chocolate, right from the front to the finish. Hints of
smoke try to come through the sweet chocolate malt notes.
M: Great mouthfeel to this porter; smooth and crisp.
O: This is a really good porter and DOES NOT drink as a 9% beer by any means. The alcohol is
very well hidden. A very well balanced and tasty porter. I think I might be looking for a
couple more bottles to see how it ages. Definitely worth a try.


Cassiopeia from Grimm Artisanal Ales
Beer rating: 87 out of 100 with 64 ratings