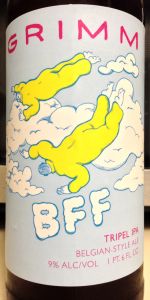 A 9% ABV tripel IPA, BFF (AKA bitchin’ falconer’s flight AKA best friends forever) is the 8th in our series of one-off seasonal beers. Made with five pounds per barrel of Falconer’s Flight and Centennial hops, this beer is Grimm’s first proper hop bomb: first-wort hopped, hop bursted, and double dry hopped for all you lupulus freaks. Of course that wasn’t enough, so we fermented it with the “clean” Orval yeast strain to put it over the top.

Beer poured a hazy gold with a solid white head.

Nose is very nice, has a very ester and citrus nose, very unique!

Taste is really well balanced with the large but light malt base is integrated with light fruits, light grapefruit and lemon. Finishes a touch dry; 5/10 on my bitterness scale.

Mouthfeel is light bodied and smooth.

Overall a nice representation of the style!

Look: mostly clear golden. Big fluffy slightly off white head on the pour that mostly recedes.
Smell: Belgian yeasty, bright hops, some candied sweetness.
Taste: much like the nose up front but the finish is distinctly different…drier with a slightly bitter finish.

Served in a goblet from the can.

Appearance: Semi hazy amber color. Off-white head which rose half a finger's length off the body.

Mouth: Sticky body with hints of yeast finish which lingers on the palate.

Overall: Nice grab, don't expect this to taste like your typical NEIPA but more of a European twist which cleanses the palates. Always in a glass...salud!

I did enjoyed its tropical notes of pineapples and mangoes but it was lacking something. This beer felt different, it taste was good but overall, I was thrown off.

This was one of Grimm's more unusual offerings, for sure as the bready, hoppy, and strong beers that they're more typically known for could not be more different than this. Sure, there was booze to be found here but the odd range of flavors and overall mouthfeel of this almost made this feel like an "Imperial Belgian IPA" more than anything else...

Of course, this beer had a cloudy, golden hue to it with plenty of foamy head on top to boot. A decent amount of soapy lacing was left along the side of my pint glass as I worked my way through this, as well. Tons of wheat, grass, banana, and clove in the nose as this initially smelled like a typical Belgian IPA. Then came the taste.

Yeast. Hay. Booze. Lots of barnyard funk underneath that along with a strong potency to boot. A soft and pillowy up-front mouthfeel gave way to a much stronger, more complex, and funkier taste that turned out to be relatively potent. Lots of stone fruit pith in the taste to go along with everything else, and a lively enough carbonation to keep this from feeling too strong or heavy. That was a good thing as the amount of wort and yeast made this feel like a beer that needed a bit more refinement!

There was more than enough booze here as it was a bit of a deterrent from the raw, yeasty, and unrefined nature of this beer. While this wasn't bad, there was so much going on here that this felt a bit too chaotic to fully enjoy. If you like body, funk, and a wide range of fruit flavors to get sloshed to, this is your brew. For the rest of us, this was something to have once but to enjoy with a hint of disdain, as Grimm could have done so much better. Had this been a bit more tame, it would have been excellent from start to finish!

this is fantastic beer, the belgian yeast element is almost inconsequential for me, as the hops are so awesome in it. its super bright beer, radiant shiny golden color, perfectly clear, sparkling, with happy carbonation and almost a full inch of puffy white lasting head, nice looking beer! the hops are neat because they have that oily dankness i associate with big west coast ipa types, and they have the sweetness that often comes with the oil, its big, but its not over the top. the hops also have a juiciness, a more flavorful complexion than the classic northwestern varietals, i get more of a botanical thing here, flowers, spruce, even menthol or something for a second. a little honey sweetness in the malt gives needed structure, and there is a wonderful freshness about the whole thing. bitter enough too to still be ipa. the yeast, i hardly really noticed when i was drinking it, a little of the candy belgian thing, but its subtle and well behind all these hops. fluffy feeling medium body and lots of bubbles, not super dry, danky in the finish, just really solid big ipa. i havent been as impressed with the hoppy grimm beers as i have with their wild stuff, but this is a game changer. loved it! huge thanks to my grimm hookup back east for sharing this one with me in the latest box of beer mail!

I did enjoy this beer overall and commend the look, the smell, and taste, but the mouthfeel just doesn't seem to match the rest of the beer; I realize the beer is 9% but it seems like it should have been dried out a little further; comes off as a little syrupy to me

Picked-up a twenty two ounce bomber at Long Ridge Wine & Spirits for about nine dollars. Had never heard of this brewery before. Decent brew, nothing special, would not buy again.

Poured from a 22 ounce bottle into a Teku glass. No date stamps. Bought at Whole Foods.
4.25/3.75/4/4.75/4
A: Pours close to clear and effervescent. Pale gold with white, dense head.
S: Smells like musty Belgian yeast and gentle hops.
T: A great beer that tastes more tripelly than tripley. Perhaps it's past its prime, but it's still a fine beer that delivers the best of all worlds. Big, but drinkable; Belgian floral, bitter earthy; lightly sweet and malty, still acidic and citrusy-tropical.
M: Huge, robust, and creamy smooth. Chewy, bready, but never sticky, with a lovely spriteliness.
O: Faded glory is still glorious. An offbeat megahit from the best brewery in NYC. Highly recommended.

Hazy, deep gold brew with a light off white head that leaves specks of lacing. The smell is a mixture of Belgian and IPA. There are notes of pineapple, citrus, cloves, bananas. The taste is the same with IPA taste up front, Belgian in the middle, boozy near the end and a bitter finish. Pretty solid beer.