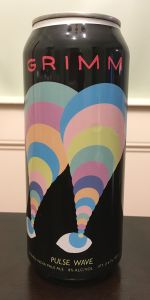 Taste: Bitterness is apparent but overall; somewhat well balanced. Upfront dry notes of airplane glue and some heat from the alcohol; paired with a good amount of bitter spruce and waxy pinecone. Goes somewhat soapy midpalate with a clean note of floral cilantro, before fading out into semi-sweet flavors of grapefruit and burnt orange rind/ triple sec. A little twang of tart mango/tangerine hiding in between it all.

Overall: Not much to say about this. It's fairly bitter and dry so if that's not your thing stay away. If you like very bitter imperial IPAs though this will make you feel right at home.

First impression of a Grimm offering. it is all I would expect from a NE IPA (double).
Nice lacing, which can be brought back a gentle swirl. Nice hazy appearance more towards an orange.
Tasting some stone fruit, with some nice bitterness in the end to round it out.
I am a fan. There is a lot of nuance in the on the back end.

Poured from a can, dated 2/1/21.
Looks opaque hazy yellow, a thick white head and lots of lacing.
Smell and taste are full of hops, herbal and citrus, dank and resinous tones blending with fruits. Light crackery malt base lends a bit of sweetness.
Nicely balanced, lively, with a dry finish.

Overall excellent, glad I picked it up!

Served in a pint glass from the can.

Appearance: Cloudy as fudge yellow with medium bubbles to the body and a subtle white head rising maybe a 1/4 of a fingers length off the body.

Smell: Flowers and roses mixed with lemon zest. Very good and gives the nose something to work with.

Taste: Complex yet smooth malt bomb of a brew. Heavy citrus skin, doses of lavender with hint of yellow grapefruit juice. The brew is a bit all over the place making the bitterness hit you pretty sharp.

The nose is quite fragrant, catty and dank and bursting with juicy hops. Aromas of lime, guava, orange juice, grapefruit, peach and pineapple. Strong herbal aromas of grass and chive interact nicely with the fruity sweetness.

Very juicy and bursting with tropical and citrusy flavors, and teeming with resinous spices. Crisp cracker, biscuit and lightly creamy oats add a dryness to the palate and support the plethora of hops flavors. Notes of grapefruit, pine, grass, orange, lime, pineapple, mango and guava. Increasingly bitter, it finish dry and spicy and with a lingering resiny aftertaste.

Medium bodied, nearly full, but easy to drink. The mouthfeel is somewhere between smooth and crisp. The moderate carbonation feels right on par.

Another masterpiece from Grimm Artisanal Ales.

A touch lighter in color than most. Nose is Sprite, lime, citrus, and starfruit. Fresh and very aromatic. Beer opens fresh. I get hints of pear, starfruit, and a dank juiciness. Fresh cut grass and citrus in the middle with more starfruit and some lychee towards the finish. Solid. A somewhat unique flavor profile. Body is light with ample carbonation. Prickly and lively on the palate and goes down crisp and aggressive. Dry, lingering finish.

Had on draft /growler at Ma and Pa’s Alton, NY. My first run at Grimm. Delicious big IPA. Smooth and complex juicey brew. Nice resin add but not intrusively dank. Very well made.

Had on tap. Pours clear, gold in color with minimal head. Taste is honey, tangerine, pine, and citrus rind. Bitter, medium bodied and carbonation. Makes for an above average IPA although I prefer several others from Grimm.

16oz can received courtesy of beerloserLI. Canned on February 26, 2018, per the bottom stamp. Don't know much about Grimm, but I'm guessing this is their standard double IPA, whereas Tesseract (which I had yesterday) is apparently this beer but with added Mosaic cryo hops. Both top out at 8% abv. It'll be interesting to compare the two.

Right off the bat, this is a lighter colored beer, if not dramatically so. Orangey golden color, though with the same relatively tight and relatively long lasting off-white head, and again leaving quite a bit of lace.

More tropical fruit in the nose, mostly of the pineapple variety. I enjoy juicy IPAs up to a point, at least until they become something that seems like fruit juice someone's added beer to, then my enthusiasm flags. I think we'll be straddling that line here.

Confirmed. Very much like beery pineapple juice. It's restrained enough to remain enjoyable, but it's close to the line for me. Less complex tasting than Tesseract to me, and too pineapple-y for me to truly love it. Alcohol just as well hidden. You could get quite messed up if you downed several of these in a session.

I like this, but don't quite love it. This is right where I draw the line at fruit juicy IPAs, and hints at the ones that I can't deal with for more than a few tastes (Left Coast, I'm looking at you). I'd drink this on occasion if it were local, but never more than one, and probably only if it's stable mate, Tesseract, was unavailable.

A: The beer is slightly hazy yellow in color and has a moderate amount of visible carbonation. It poured with a quarter finger high bright white head that died down, leaving a thin layer of bubbles on the surface and lots of lacing down the sides of the glass.
S: Light to moderate aromas of peaches and pineapples are present in the nose along with some hints of pine.
T: The taste is stronger than the smell and has initial flavors of oranges and pineapples along with hints of pine in the finish. There is a light to moderate amount of bitterness.
M: It feels nearly medium-bodied and crisp on the palate with a moderate amount of carbonation.
O: This beer isn't that heavy on the palate and hides its alcohol very well, making it quite drinkable.

A - Vibrant and clear medium gold colored pour with thin, but sticky lacing.

S - Light citrus and malt aroma. Balanced in the nose.

A: The beer is a deep gold color, with a large off-white head that fades slowly and leaves a thick lace on the glass.

T: The taste starts out very sweet with flavors of tropical citrus fruits and caramel. Then a strong but not over-powering hops bitterness comes in. The malt character is hearty and brings a good balance. The after-taste is slightly sweet and slightly hoppy.

O: Tasty, goes down easily, not too filling, good kick, good representation of style, this is a solid IPA to drink for a while.

On tap, pours a mostly clear light gold. Smell has somewhat indistict tropical notes and other fruits. Taste is fruity but with some spicy herbs and some resinous pine. Decently bitter. Nice beer.

Traded for this recently, as I've been on a Grimm kick lately and wanted to give this one a go as well. While not a bad beer, this was about as "typical" as one of their offerings could get. If you like your beers to taste tropical with a mouthfeel full of nectar and a clean finish, this one would be right up your alley!

This had a good look to it as I poured it out, with the liquid coming across as somewhat thin and lively. It had an amber hue, a good amount of haze, and plenty of head that settled down quickly enough. Most of the lacing left behind was along the top of my pint glass with clumps of it clinging down the back as I sipped my way through this. Plenty of nectar, sweetness, and stone fruit in the nose with even more in the taste. Lots of resin and a hint of onion on the palate as this had mild kick to it with a bit of pepper-like warming in the back. Quite slick, the liquid was thin but had enough body to it due to the resin, feeling of honey and presence of citrus hops.

There was just enough booze in this, as the beer had a slight warming effect by the time I worked my way through this. There's enough bread and a hint of grain in the body but the dankness wasn't as heavy as more cloudy IPA's from this neck of the woods. If you wanted to start off with a textbook Grimm Ale, this would be the first one to reach for. It was solid without being outstanding but by the time you would realize that, your glass would be empty!