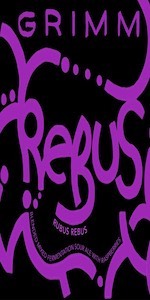 Appearance: 5 - Stunning red-orange color. The bright white head remains as a ring around the top. If like to ding it for the filthy yeast residue on top of the glass, but that's against the rules.

Nose: 5 - could be a real winner here. The fruit and sourness is so darn bright. Intense.

Taste: 4 - maybe even sourer than Lilt. Unfortunately the sourness takes over too much and we're left with less fruit than the nose predicted. Can't trust any polls these days.

Overall: 5 - yes, you can get a perfect overall score even if the taste is not perfect. An exceptionally crafted brew.

A: The beer is hazy purplish red in color and has a high amount of visible carbonation. It poured with a half finger high light pink colored head that gradually died down and left a large patch of bubbles on the surface and lots of thick lacing clinging to the sides of the glass.
S: Light aromas of raspberries and sourness are present in the nose.
T: The taste follows the smell and is somewhat sour with some added funkiness and has moderate flavors of raspberries.
M: It feels light- to medium-bodied and tart on the palate with a moderate amount of carbonation.
O: I really liked how this beer was blended as you can get some sourness, some funk, and some raspberry flavors all in the taste, neither of which overshadows the other.

Raspberry-centric all around. Smells like Rasberry, but not like a beer. In fact, you would hardly think you were drinking beer if you did a blind taste test. Fermented raspberry health drink like kombucha would be a good guess. The sour punch is quite mild compared to most Grimms, but this one is a definite winner. One of the more unique Grimms I have tried yet, and one that just about everyone would enjoy. Once again, Grimm produces a winner with another successful brew. Cheers!

Picked this up at Grimm a few weeks back, having never had this before. Saw how highly this was rated and although I didn't dislike this beer, I thought that it was just a bit overhyped. Yes, this was quite fruity, wild, and untamed but at the same time, it felt too sour to be an outstanding American Wild Ale. Combine that with the light alcoholic presence and the end result was a beer that was enjoyable, but not outstanding in any aspect...

If you like fermented raspberries, you've found your match here as the pour was that aspect epitomized in every way, shape, and form. Tons of redness in the hue with a white head that was tinged with salmon; complementing the liquid as perfectly as possible. No lacing was left behind as I sipped this as the foam quickly and loudly settle down, reminding me of a Gose. Acetate, tart fruit, and lactobaccilus in the nose but none of them were terribly strong or overpowering of the other notes at the same time. A lively carbonation, persistent tartness, and underlying sourness were the hallmarks of the taste as this went down easily but needed a bit of adjusting to, as this didn't change much upon warming up.

Not a lot of booze here as it only served as an afterthought to the puckering, rustic nature of this liquid that ultimately won the day. While not one of Grimm's more outstanding offerings, this was a solid brew that had enough carbonation to it to keep it lively while offsetting the heavier tone of this American Wild Ale. While this may be too outdoorsy for some, I enjoyed this and would get it again if I was given the opportunity to!

for how much fruit they say they use in this, it didnt seem all that absurd in the flavor of this lively, hazy pink brew. sure, its unmistakably got a lot of raspberries happening, its juicy and tart and ripe like that, but i wouldnt put this in the outrageous level, it still drinks more like beer than fruit juice, and still leaves some space for the other elements to contribute, namely the yeast elements, which are funky and tart, but maybe not quite as wild and complex and nuanced as they appear in some of the other beers we had in here. i get more of a bacterial tartness than anything else, acidic and puckery, nice way to accent the fruit, but with much less bretty character than i thought it might have, given the presence of multiple agents here. i kind of like this being in stainless and not oak, there is a brightness and lightness about it that can only come from this method, i think making a more drinkable and even approachable beer in this style, and it still seems mature enough on the ferment. floral notes here like hibiscus come in at the end, a sharpness, even astringency from the fruit and the lacto, and just a little balancing jammy sweetness. fun beer, not as unique as some of their others, but decidedly delicious. everything we had in here impressed me!

On tap at The Tap and Mallet in Rochester, NY.

This one pours a super rich raspberry-colored red, with a small head, and no lacing.

This is not the most complext beer you'll ever have, but they absolutely nailed a wonderfully juicy and very sour raspberry wild ale. I don't get a whole lot of whatever the base beer is, just very sour raspberry, candied, and puckering.

This is lighter bodied, very juicy, with a good level of carbonation.

This is probably the best new sour that they've done in the past year- absolutely delicious.

On tap. Funny how this description here calls it "golden". It was the color of pulverized raspberries. Aroma was pretty clearly berry-esque but I got just as many tart and sour scents that I wouldn't necessarily attach to the berries. The flavor was heavy on the lactobacillus. The raspberries were flavorful but surprisingly far from sweet. Cool beer. Not the most complicated.

S: smells sour. There's an intense raspberry smell as well, but it's blocked by the lactic burn here. Very pleasant, but works in opposition to the fruit that should be on the nose.

T: This is a sour raspberry beer. The raspberries taste whole and wholly natural, which is rare for fruit adjuncts. There is some sour necatarine on the pallet as well. I can even taste raspberry seeds on the tongue. so good!

F: thick and creamy, but loses something in the sharpness of its sour.

O: an intoxicating, refreshing, and challenging drink. If you see this on tap RUN don't walk.

Very sour, bursting with raspberry flavor. Reminds me of FW Bretta Rose. I'm not a big fan of the style, so I'm largely going with the flow on my rating.

On tap at Barcade in Chelsea.
A murky pink foretells the berries. Dare I say it's a middling raspberry sour? Plenty of lactic acid and loads of pleasant fruit. If you like raspberries, you'll like this. But Grimm has done much better.

Overall very nice. Nice little sour bite in the taste, would love to have it again.

5 ounce pour at Lupulo in NYC.

Beautiful looking beer with a sharp red tinge that resembles few others beers I've ever seen.

Smells and tastes of immense raspberry. It's all over this beer and does an effective job of veering the beer into territory where it tastes juice-like. It's remarkably fruit-pronounced.

The feel is impressively refined and doesn't overwhelm with tartness, as the generally tart raspberry here plays the foil to the tartness and keeps this beer tottering between tart and sweet. The beer overall is light and refreshing and incredibly easy to drink.

My wife tried this and ordered a pour. That never happens with beer. She and I liking the same adult beverage never happens and it happened here. Splendid.