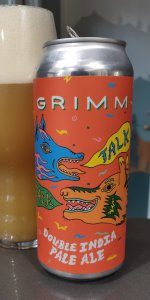 Reviewed by Utica_Club_1971 from Massachusetts

(Aside: why does it matter what a beer looks like? If I were a blind person, would I lose anything of the beer-drinking experience by not being able to see it? I doubt it. But for whatever it's worth, Talk Talk does look pretty awesome.)

Taste: Pretty much perfect New England IPA. Much fruitier-tasting than West Coast IPAs, of course. It's complex, like all good (wines and) beers. It's not just one taste but a succession of them that are hard to describe. Bravo. The only thing that makes the taste less than perfect is that it's a bit boozy. Not overly much, but still noticeable. It's an 8% ABV, so naturally one must expect it to be a bit boozy. Talk Talk hides the alcohol better than most 8-percenters do. But it's still there. So I'm giving this beer a 4.5 instead of a 5.

Feel: I mark it a 5 out of 5. This is exactly what a beer is supposed to feel like. There's texture there, and carbonation (but not too much carbonation, like club soda or something). I know it's a beer, not a wine, but this is the kind of drink you can savor for a bit before swallowing.

Reviewed by Pentastar from New York

Reviewed by Lingenbrau from Oregon

4/5  rDev -6.3%
look: 4 | smell: 4 | taste: 4 | feel: 4 | overall: 4
Talk Talk has that impressive off white root beer float foam that leaves ample spots of lacing. The smooth mass of opaque yellow with a touch of cardboard brown is what I imagine as near-picturesque for the style. (4.0)

This actually smells much like a classic DIPA to me. Grapefruit pith and pine, but there is a unique neoprene/ burnt rubber aroma. If I could describe it simply, I'd say "raw sap", for whatever that's worth. (4.0)

I find this very interesting and quite difficult to describe. It's very earthy in general. But more like fruit skins fresh off the farm. Lemon and orange peels, unwashed and over a bed of dried evergreen needles. However, there is a well hidden sweet vanilla like thing going on deep in the background. (4.0)

Despite what its looks could imply, this is quite crisp feeling. Sharp with balance before an intense bitterness and dryness take over. Light chalk and acidity. Easy to drink,but does leave a lip smacking dirtiness. (4.0)

I'm giving 4's across the board here. Intensely bitter yet easy to drink, but lacks a punch in flavor and aroma.

Cheers and thanks again, Jay!

Smell is bitter citrus(orange and grapefruit)
With some grassy goodness

Reviewed by TheBeerBeer from New York

Rarely does a beer served on draft bring the same flavor inside a can, this one delivers both at your bar and at your home. Solid.