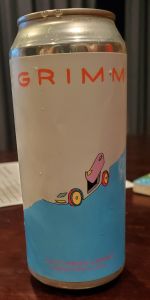 We’ve taken one of our most beloved beers, Lambo Door, and reconfigured the DIPA as a bite-sized, super crushable session IPA. Matchbox Lambo is all mango and peach on the nose — like opening a bag of Haribo gummy rings. Notes of Valencia orange pop in the flavor. The body is light and dry with a mild and refreshing bite of bitterness.

Can Date: February 2022
Palate Contaminants: other beer and wine

Smell has really good pineapple and pine sap. The intensity of the latter is really good, and it combines with sweetness. It ends up having a bit of citrus, too

The pine sap and citrus are big in the taste. The citrus is mostly non-sweet orange, with some lemon peel. The pine sap is also present. That also trends toward freshly cut grass. The intensity is pretty good, especially for a brew that claims to be "session."

The aftertaste is really piney, very forest, without any of the excesses. Alcohol is well in the background. Medum-fine carbonation, only lightly prickly.

Served from the can in a Lagunitas mason jar.

Pours a hazy sunset auburn-brass topped by a finger of lightly off-white foam. The nose comprises lemongrass, light orange zest, a hint of pineapple pith, light flowers, and a twinge of cracker. The taste veers hard into the grass and pith regions, draining most of the juice from the fruits in the process. Whatever's left doesn't linger long, as nearly all flavors evacuate the tongue in a matter of seconds. The body is a rather light medium, with a light moderate carbonation and a rather dry finish. Not really my jam, here.

Pours a golden slightly orange. Lots of tropical essence on the nose - I get a freshly cracked can of Dole Pineapple and some papaya. All of those aromatics are an olfactory Trojan horse as you don't really see those flavors carry through. It's dry, you get some oaty malt character as well. This suffers some because I'm not a huge fan of the flavor and I think that hurts the drinkability of it. There's some green onion character that goes along with the malt that makes it tougher than a 4.5% should be. Just not a fan of it.

A: The beer is hazy and a bit pale yellow in color. It poured with a quarter finger high white head that left a collar around the edge and some lacing down the sides of the glass.
S: Light to moderate aromas of peach and pear are present in the nose.
T: The taste follows the smell but has stronger flavors of peach and pear along with hints of stone fruit. Little to no bitterness is perceptible.
M: It feels nearly medium-bodied and somewhat juicy on the palate with a moderate amount of carbonation.
O: While this beer almost seems effortless to drink, its session ability does not detract from the strength of the aromas and flavors.

light and easy sipping. enjoyed this better as my first beer of the day as opposed to yesterday when wedged between two heavier hitters.

One of my favorite DIPAs in recent memory, now in bite-sized form! I had no idea this existed, nor did I have any clue we'd see it in my distribution area, so finding this on the shelf made me do a double-take, then actually let out a little snicker. Grimm got me here; I had honestly thought we got a second drop of Lambo Door (the full-size version of ML) and that it was weirdly cheaper, as this was something like $4.50 a can... still kind of yikes but I suppose it's forgivable. Anyway, this really is just a smaller version of Lambo. Same hops and probably the same grain bill, just scaled down. Fun!

The pour here is somewhat close to regular Lambo but slightly lighter, probably because this doesn't use as much grain so it appears less dense. It's an essentially opaque pineapple juice-looking color with a hint of golden peeking through. The head is retentive yet moderately-built; about a finger at its highest point. Lacing isn't as consistent as I noted with LD, but it's pretty good and sticky as hell. Average-to-good legs and moderate surface coverage. Good but not fantastic.

Nose is very similar to Lambo, punching my senses right off the bat with ludicrously great scents of tropical fruit gummi bears, papaya, mango, and pineapple. Maybe a hint of passion fruit as well, plus some very light suggestions of pine and orchard fruit. El Dorado does some magic in the main recipe, and it functions just as nicely here, providing a very intriguing and attention-grabbing counterpoint to the aggressive Citra/Simcoe combo.

Flavor profile has a slightly less aggressive tone to it than regular Lambo, but that makes sense given the ABV difference. Up front it is big on grapefruit and tangelo/tangerine, light pine, and blueberry with some of those gummi candy notes in the mid-palate. Some nice oats (or maybe wheat) as a backbone for the grain bill, giving it a little heft. Orange and juicy pineapple with some light papaya. Bubbly and fizzy but still somewhat heavier bodied than other sessions, like I mentioned. Almost like a mimosa beer; if you added a few cL of OJ to this, it'd be nice as a wake-up treat. Fun and enjoyable. Will buy again, but it isn't a priority like LD is.

I wish it was a bit more juicy but, still not a bad beer.

As good as a session gets: basically a juicy hop soda pop. Grimm is killing it!

Doing all 4s because I don't want to write a thesis just want to keep track of what I'm drinking.