You Can't Get There From Here - Black Raspberry And Currants
Burlington Beer Co. 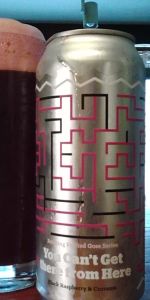 A: Pours a deep dark purple color with 2 fingers of head that fades down to a thin cap

T: Follows the nose. Starts off with some light acidity, raspberry, currant, and the salinity. Picks up some super light bready notes. Finishes with lingering currant and salinity

O: A solid fruited gose that is very easy to drink. Decently simple. Worth a drink

16oz can. Poured out a clear, purple-ish, red color with a good-sized, pink head of foam. It left sticky rings of lace on the glass. It smelled of tart raspberry, sweet currants and some subtle caramel. Sweet and tart tasting beer with raspberry and currants.

Pours a finger of head into my wheat glass, fades pretty quickly. Body is a very dark purple. Looks like a gose.

Nose is tart & dry, but does have a noticeable fruit character. I don’t have a problem with gose’s, but one of the reasons I don’t frequent them is because they are often boring and one dimensional. Adding a significant fruit character will hopefully be helpful, and it certainly makes for a better nose.

Flavor seemed quite off at first, just extremely watery. After a few sips it developed. It’s a little tart, a little salty. Finishes with a small fruit note, and then a musty flavor. It’s alright I guess, still a little watery, and I’m not sure how common the funky musty flavor is at the end, but this doesn’t have any brett in it, so it seems weird and unwelcome. As the beer warms, even some light DMS is noticeable.

Carbonation is on the lower side. Body is very thin, watery. Dry, and tart. Mouthfeel is ok, but the carbonation needs to be higher in my opinion.

Overall not a super hard beer to drink, but the less than perfect flavor does have a negative impact.

Appearance turned out poor, bad head, no lacing. While I feel like it’s common for gose’s to have bad retention and lacing, it’s not the case on BJCP, so this is definitely unacceptable.

Overall a sub par beer. I got this from a patron from Vermont, so I don’t know when it was purchased. However the Burlington Brewing website says they are still selling this version of their gose series, so it shouldn’t be too old. Plus gose’s take a while to go bad.

Pours a deep mahogany color with a half finger of pink head. The head is gone quickly, leaving no lacing as it settles into a halo.

The aroma brings notes of raspberry and black currants. There's some bready malt in there as well.

The feel is medium-light bodied with moderate carbonation. Very creamy and soft with a relatively dry finish.

On tap the Barnyard, Williston, VT.
The appearance was a mildly dark purple color with a pink-ish head slowly dissipating finely.
The aroma had a swift sweet to tart glossing of black raspberry and black currants. Wildberry to gooseberry backbone touching some sweet grass and sour character.
The flavor was moderately fruity sweet through those prior mentioned aromas. Nice fruity soothing aftertaste running through the blackberries and black currants, sweet and tart.
The mouthfeel was about medium bodied, almost full bodied with a pure sipping quality about it. Carbonation felt just a tad lower than expected but I was fine how it came across for the most part. ABV felt on par. Finish was all about the black raspberries and black currants.
Overall, another knockout by BBC in the fruited sour ales category. Would be practically perfect for dessert with some cheesecake.

Moderate pour yields a one inch pink head over a reddish purple body with some fleeting lacing. Nice nose of black raspberry and currants, big on the black raspberry until it warms a bit and the currants come forward. Taste mirrors nose with a berry/gose tartness not quite overcoming the sweetness of the fruit, so this is a pleasant experience. Nice feel on this one. This beer likes me. Cheers to BBCo!