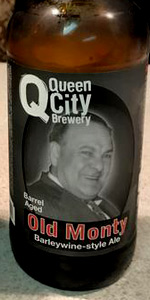 I tried this beer at the brewery. It poured a dark amber with thin off white head that did not leave much lace. This version was aged in Charrdonay barrels. The scent carried dark fruit base with white grape highlights. The taste was nicely balanced and easy to drink with booze, plum and white wine flare. The mouthfeel was medium in body with good carbonation. Overall its a good beer.

On tap at the brewery.
The appearance was a murky dark rusty mahogany color with a cap of a little white foamy head that quickly fell off to leave barely any lace. And what was there seemed to just slide right on into the beer.
The aroma had some raisins/figs, cocoa powder, grassy to earthy character, and some light red delicious apple. Slight sweet wood.
The flavor was moderately sweet containing the prior mentioned aromas to slide on in nicely. Mild aftertaste of the cocoa to raisins.
The mouthfeel was about full bodied which seemed a bit un-expectant to me, but I'm not arguing. Mild carbonation with the expected ABV hitting appropriately.
Overall, pretty good English styled barleywine I wasn't expecting the body to feel as heavy as it did. I did miss some of the normal "tobacco" qualities found in the style and also the "wine barrel," but was that due to being a draft beer? I'm not sure, but I do want to come back to this and preferably in the bottle just to see how it aged.

I've been sitting on Old Monty for a while now but I just couldn't resist, even in the summer heat (well, I am in air-conditioning).

I could see the yeast caked along the edge of the base of the bottle, but even with a fairly delicate pour it's surprisingly hazy. The color is a deep russett/light mahogany beneath a full-sized head of rocky light tan (khaki). The head retention is excellent and it just doesn't seem to want to drop, and of course the lacing follows along with that at least part way.

In the mouth it's medium-full in body with a dextrinous edge that borders on becoming full but isn't quite there. The carbonation is moderate, as expected, and it gently caresses the palate before becoming smooth as it warms.

I find what I feel to be East Kent Goldings in the aroma with an apple-like and mildly mineralish yeastiness over a grainy, medium and medium-dark caramelish malt. Some oak is present as well.

The flavor offers fruit as well, continuing with apple but adding in raisins and figs. As expected, the caramelish malt suggested by the nose remains intact. There's even a bit of a golden caramel note to it that goes along with the graininess. The label claims there are "four British malts" utilized, I don't know what they are, but I'm reminded of Golden Promise. Hmmm... I wonder, I haven't been able to put my finger on the fruitiness exactly, I was thinking it was almost like a cider or tart apple... could that be from the Chardonnay? And having noted that, there is an oaky flavor and dryness to it, but it's just an additive component at this point, with the malt and hops (surprisingly) acting as the mains. A firm bitterness balances it, and it bounces between yeasty fruitiness, maltiness, earthy/leafy/floral hops, minerals/earth/ and wood before finishing in a more muddled-up, gently lingering, dry finish. The label also suggests "madeira" which is a fortified and usually somewhat oxidized wine, and I'm finding a bit of that now as well. As it warms it opens up, and some of the alcohol is revealed, despite the fact that it's just 9% ABV (?). Unfortunately, there are some phenols present as well, and perhaps it was fermented a bit warm. Normally I might suggest serving a barleywine at cellar temperature, or at least waiting until it warms a bit, but I think in this case the unique trip that you'll find is well worth starting cold, or at least cool, but it's a sipper anyway, so it'll warm before you get too far.

Overall I was charmed, but I feel there are some fermentation issues that keep it from being the best that it can be. On the up-side, the fact that the ingredients stand out so nicely is a big plus (EKGs and what seems like floor-malted quality malts); and the fruitiness that was obtained through the fermentation is quite nice. Given the price on can hardly complain. I'd suggest you give it a shot.

L-The beer pours a deep cola color with a fluffy off white head of a couple fingers. Lacing is prominent and clinging.
S-Dark fruits permeate the nose with some faint earthy hops at the back end.
T- Taste is like the nose, but more with more intensity. The hops do only enough work to cut some of the sweetness and are quickly lost amongst the malt and dark fruit notes. Some will find the beer too sweet, but for my palate I like it quite a bit.
F-The mouthfeel is on the high side of medium. Carbonation is very light despite the size of the head on the initial pour.
O- A good if not quite excellent english barleywine. Worth giving a shot if you like the style. I do and will pick some up again when I see some.


Old Monty from Queen City Brewery
Beer rating: 88 out of 100 with 17 ratings