All Citra Everything
Other Half Brewing Company 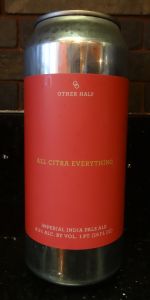 Pours cloudy yellow with an inch of white fluff. Retention is persistent with plenty of tattered lacework. Loads of orange and peach in the nose. Medium bodied with a soft mouthfeel. Juicy tropicals on the palate with minimal malt or bitterness. Orange and peach. Finishes fairly dry with lingering tropicals.

ALL CITRA 07/22/20 stamped on bottom of can. Poured into a Samuel Adams Perfect Pint.

S: Fruity but less tropical and pineapple than I would expect with a lot of orange, lime, peach, and light melon with some weedy dankness.

T: Flavor is a little sweet and low on bitterness to be in the upper echelon for the style but still no doubt an enjoyable NEIPA. Heavy orange, red grapefruit, lime, and melon in the finish. Low bitterness with general fruity yeast esters.

M: On the dangerous end of drinkable at 8.5% with medium, soft body with low carbonation and lingering finish without minerality or chalkiness.

O: A super beer for OH but a bit too sweet in my opinion. Thanks to my friend Eric for furnishing a can out of the goodness of his NEIPA-loving heart!

Feel- Medium bodied, sweet and sticky up front with a light grapefruit pith bitterness on the back end. Light carbonation on the tongue.

O- A solid NE hazy, lacks a little in the appearance but it's really tasty.. Worth checking out if you see it.

This thing tastes like a little margarita! Lime quality pops on the taste. Orangeade and great malt sweetness.

Lovely and all too easy to drink. Just enough dryness from yeast and bitter hops. A little rindy in a good way.

Tons of citrus (orange, creamy tangerine) and tropical (mango, papaya) aroma and flavor. Very smooth, creamy mouthfeel. This is a great example of an all-Citra NEIPA.

Cloudy pale yellow with two-and-a-half fingers of near-white head that seems airy from the side of the glass, but dense and foamy from the top. Lots of sloppy, soapy lacing.

Orange flesh, grapefruit and weedy dankness, with some green onion and cat piss. I like it!

Orange citrus up front in the taste, again with some weedy, jungley, oniony qualities to it, which prevent it from seeming too sweet — although a little orange juice sweetness does build in the aftertaste.

Another very solid NEIPA from Other Half.

Decanted from a 16 oz (473 ml) can into a conical pint glass; no production information.
A: Pours a hazy golden color, similar to grapefruit juice, with a half inch off white head, low to moderate retention, and modest lacing
S: Aromas of grapefruit, Chardonnay grapes, caramel and pine predominate.
T: Semidry. Palate largely follows the nose, but a touch more lime than simply grapefruit. Bitterness moderate to strong but blending in nicely with other flavors.
M: Medium bodied with moderate retention of effervescence after decanting. Juicy.
O: Enjoyable and very drinkable. Really evolves an it warms to semisweet and fruitier. Another relatively light NEIPA from Other Half.

Smel is juicy and tropical, mango, pineapple and a hint of vanilla.

Taste is slightly sweet and creamy and more citrusy than the nose. Some mango is still there, along with some grassiness. Great, soft bitterness and terrific hop bite.

Overall, another terrific IPA by OH.

Pours like orange juice with a nice white head. Aroma is citrus and hops.
Taste cotrus right up front. malts with lots of orange, lemon and grapefruit this is one of there best. Look forward to more from them.

Poured into a tulip, the appearance was a hazy golden yellow to orange color with a finger’s worth of white foamy head that fell off at a moderate pace. Light stringy lace. The aroma had citrusy zest, pine sweet and bitter qualities, orange juice, and some freshly cut grass. The flavor lent a hand to the sweet side of the prior mentioned aromas. Citrus zest pops in after a little bit of warming. Aftertaste was full of the blend between zestiness and sweetness. Finish pulled in a touch of bitterness. The palate was about medium bodied with a pretty good sipping quality about it. Carbonation felt good. ABV felt appropriate. Overall, pretty good DIPA that I wouldn’t mind taking more cans to the dome.

Served in a tulip from a 16oz can.

Smell: Hops and citrus skin, potent and smooth hit to the nostrils.

Mouth: Heavy stickiness with medium carbonation but definitely heavier from the initial pour.

Overall: I definitely over paid for this brew but with serious happiness. I definitely will be making a trip to Other Half and cleaning out a few shelves. Incredible pick-up..grab it if you see it with no hesitation. Salud!

S: Just a very nice citrus and tropical blast. Grapefruit, pineapple, and mango predominate. Light malts and a bit of earthiness on the end.

T: Tropical and citrus up front, as the nose would indicate. Grapefruit, tangerine, pineapple, and mango. Light malt mid-palate. Finish is slightly earthy and bitter, but this is mostly a fruitbomb.

F: Medium bodied, light to medium carbonation, so a slight bitterness does linger on the palate on the finish. Otherwise, balance and construction are fine, but this is an area that could be tweaked a tiny bit.

O: Great DIPA and it's hard to go wrong with Citra.

First had poured from pint can, stamped on bottom, "1/13/17, PINK CONTENTS," gift from cousin, into nonic pint. What would be simple (yet outstanding) is made complex and absorbing by the excess dry hopping.

By far the best Other Half I have had to date. I want more.

Big citra ipa. Great aroma and flavor. Only complaint is in the mouthfeel and finish as it was a bit chewy and slightly bitter and boozy. Very nice beer.

This beer is right in their wheelhouse. So much Citra! The aroma alone almost knocked me out of my chair. There's a reason this sells out in a few hours every time.

Poured into my 13 oz Weyerbacher tulip glass canned on 2/24/17. Pours a very murky orange yellow, with a two finger sticky white head that leaves behind a massive ring of lace.

Smell is mango, papaya, tangerine, guava, pinapple, and some grapefruit.

Taste follows tropical all the way and exactly what I smelled.

Overall another amazing DIPA from these guys, classic North East DIPA. Thanks @Rcruz9230 for another gem.

Typical Other Half NE IPA look-all turbid and stuff

Appearance: Arrives with a murky honey color and capped by a thick hive of a head; sheets of lacing

Smell: Orange floral aromatics with a touch of honey

Taste: A touch of honey on the tip of the tongue and then the citrus flavors explode, bringing orange and mango; undertones of melon and strawberry add another dimension

Overall: Another great citrusy IPA from the folks at Other Half.

Turbid hazy golden orange with a big white head and nice lacing. Aroma is saturated with citrus and hop. Notes of citrus pulp medley, tangerine rind, dank pine rubbed on citrus pith and breakfast grapefruit with a sprinkle of sugar. Medium toward full feel, slick, coats the pallet and finishes a touch dry. I pronounce this my first WOW beer from OH. A juicy citrus soaked hop bomb. Amazing!

Pours a hazy pale orange in color with a finger of white head that dissipates into oblivion. Aroma has lots of zesty citrus and tropical fruit. Lots of soft flavors here. I get zesty tangerine and orange along with mango and papaya. Medium+ body and moderate+ carbonation. I really dig this beer; it has lots of soft, smooth flavors that play very well together.

Head is a centimeter. White colour. Coating lacing. 1-2 minute retention (in a tulip).

Body is a hazy vibrant yellow-orange. No yeast visible within. Translucent; nontransparent.

AROMA: Pulpy orange citrus dominates, as well it should in a citrus showcase (I)IPA. Pale malts balance out the hop bitterness, bit this aroma is orange juice-emphatic as they come. No booze or overt yeast.

TASTE: Just as the aroma promised. Citra citra citra. It commits to its core hops, emphasizing pulpy orange juice and citrus. Pale malts keep it balanced, and the lack of (much) filtration enhances the pulpy flavour and texture.

It's a citra forward IPA (I reject its designation as an imperial IPA as marketing drivel), and delivers on its premise - yet its premise is limiting. There isn't much intricacy here since it's all citra, and depth of flavour is average at best. You've got the orange juice, the pulp, the hops...but altogether it just doesn't provide much - even though its balance is impressive.

TEXTURE: Coating. Has a nice push-pull between coarseness and smoothness, wetness and dryness. Medium-bodied. Not too oily. Well-carbonated. Pulpy and uneven, which plays to the orange juice schema but doesn't come off all that pleasant or approachable.

OVERALL: Drinkable fare from a well regarded brewery, but not exceptional work - committed to its citra hops though it may be. Hopwise, it just feels like it's missing something - its other half, as it were.

All Citra Everything from Other Half Brewing Company
Beer rating: 96 out of 100 with 367 ratings