Topical Depression
Other Half Brewing Company 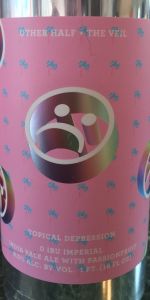 A 0 IBU Imperial IPA brewed with Galaxy and Citra and over 400 lbs of Passion Fruit.

This was poured into a tulip. The appearance was a hazy burnt orange color with a quickly dissipating head. Damn thing near just rode off into the sunset with no regards to lacing, hmmmm...one would suspect, but hey, here’s the rest. The aroma starts off with sweet passionfruit and papaya, very pronounced. Sweet grassy edge underneath. The flavor takes all of the previously mentioned aromas to sweetly boot in the face of danky sweet onion. Grassiness does come back to slide into aftertaste along with the passionfruit/papaya sweetness. Semi-dry sweet to bitter finish, somewhat sticky. On the palate, this one sat about a medium on the body with an acceptable stickiness, not cloying (almost) in the feel. Overall, very good tropical fruit flavored DIPA that I could have again.

I was really looking forward to trying this, but just wasn't into it. It kind of tasted like hop flavored water. The 0 IBU thing can be done well, though - I Want to BU was great!

Idc if this beer is 0 ibu b/c it is heavenly tart and bittersweet. Underripe strawberries. Pulpy lime and pineapple. Taste is good. It starts out heavy with passionfruit blitz, but unlike a guava juice which is thick and nectary, passionfruit is just thin. This leads to my biggest problem, which is the watery feel. Perhaps a slight pulpiness, but very blonde and bready; it lacks any sweetness at all.

Okay, so I bought this when it was released on 8/12 (with "#Sadboyz written above it)...just like every other Other Half beer since Street Green put these guys on the map back in November. I loved the label design for this but the part that had me wanting this beer was the 0 IBU. Who has ever brewed, let alone had, an American Double / Imperial IPA that was a professed 0? Well, lots of people did when this came out and based on what I heard, I expected this to be a juice bomb. Sure enough, it was but it was tasty enough to savor without being overly dank, strong, or acrid. In other words, this was a winner in my book!

The pour was really nice as the dank hue, minimal head, and soft lacing were hints that this was *not* like the other IPA's that they've put out over the last few years. Was expecting a juice machine on every level and that's what I got, as the muted aroma, mild yeast, and citrus zest combined for a quiet but understated smell that drew me in. Lots of the latter in the taste as this was incredibly juicy, slick, and full of passion fruit underneath the initial citrus blitz. The floral, medicinal mouthfeel to this came through in the aftertaste as there were herbal notes and a bit of aspirin in the midst all of this, though they took a while to show through. A mild slickness and notes of elderflower rounded this out as everything meshed well together and combined with the low bitterness and light carbonation, allowed the tangerine and orange to last throughout my drinking session.

The alcohol was here but could be tasted and only could be detected as I finished this off. Not much of a warming effect could be felt here as the juice took center stage here over everything else. While not everyone's cup of tea, those looking for a change from overly hoppy, dank, and potent IPA's would easily fall in love with this beer. It would be a challenge to come up with an IPA that scored a "0" but Other Half was able to do that with flying colors, further proving why the hype is real and that my love for them is fully founded. A great beer not on par with any other.

Growler shared by Paul. Thanks man.

Poured my last 16oz can of this. Sad boyz 08-12-16.
Looks wonderfully hazy and cloudy apricot in color. Smells of tropical fruit, passion, mango, pineapple. Taste is very tart and bitter for 0 ibu. Overall mouthfeel is sour passion fruit with very little actual beer taste. Definitely a juice bomb. The alcohol is well hidden for 8%...guess that has something to do with the 400lbs of passion fruit this batch was brewed with. Good for what it is...unique beer to say the least. Pushes the limits of "is this actually beer"??

On tap at One Mile House.

Dirty impenetrably hazy yellow-orange pour, with a small ringlet on top. Juicy aroma, tropical and rotting stone fruit. Taste was malt-forward, sugary sweetness, with the fruitiness of the nose coming in as well, some fusel alcohol. Too sweet for the style, without enough bitterness to balance. Lower carb with a somewhat sticky mouthfeel.

A- A hazy/murky burnt orange with a two finger white head.

O - unique, you'll love it or hate it

Look cloudy; smell rich with hops but no head to carry the nose. taste great, such a great balance with the fruit it is difficult to identify unknown. Smooth at the edge of tart with only fine carbonation.

Poured on tap in a snifter, the beer is a hazy, straw yellow coloring, with a foamy, clingy, white head. Aromas of tangerine, orange, mango, and grapefruit, with grassy hops. Flavors are juicy and effervesced forward, with orange and grapefruit in the forefront. Grassy and herbal highlights throughout, on a light, dry body. Citrus and herbal aftertaste, with a light, dry finish. Good beer.

Body is a dirty, hazy orange with a hint of amber and thin, soapy off-white head. Aroma is fruity, juicy, noticeable grassy and vegetable aroma. Flavor is big and juicy, tons of passion fruit, juicy fruit rind, a bit of grassiness and no bitterness. Feel is smooth, juicy, easy drinking with a sweet aftertaste and medium carbonation. Very unusual, very different, fruity, pretty easy to drink. Pretty interesting all around.

16oz can poured into an Other Half snifter.

L - this is probably one of the darkest IPA-type beers I've ever had. Pours a hazy, opaque deep copper color. Definitely interesting, and probably the first indication of the overall feeling this beer would give me.

S - probably the best part of the drinking experience for this beer, as expected. The smell is overwhelmingly fruity and pretty sweet - there's tons of passion fruit on the nose, obviously, but also a good amount of mango that contributes some density to the overall aroma. Not as refreshing as I had imagined, but still very good, just in a different way. The citra adds just a touch of tang and keeps the smell from being too heavy and dark.

T - again, Topical Depression meets my expectations, but in a different way than I had imagined. Instead of being the fruity, crisp double IPA I was expecting, it's very full-bodied and dense in flavor. Given the way it smells, there is a surprising tartness to the taste, again keeping it from being too dark. A slight sweetness complements the first impression of passion fruit and mango, giving away to the tartness. I have to cap this at a 4.5 because there isn't as complex an aftertaste as I would like, but I suppose that's what happens with a 0 IBU beer.

F - like the way it looks, Topical Depression feels pretty dense and thick. I would say the consistency is a bit thicker than that of Debbie Downer, which is already pretty thick as it is. In terms of carbonation, the two are very similar - there's a surprising amount of light fizziness that sparkles upon the first sip, but it easily gives way to the more dense texture of the beer as you drink more. Could definitely be more carbonated to give a more refreshing character overall, but it doesn't significantly detract from the beer.

O - I had pretty high expectations for this, considering I love IPAs, I love citra and galaxy hops, and I love passion fruit. Did Topical Depression meet them? For the most part, yes. I was expecting (and hoping) it to be more refreshing, but then again, Other Half is known mostly for dank hop bombs. It's definitely very good, but I think the heaviness in combination with being different from my expectations keeps this from being a world-class beer for me. Regardless, still great, and I'd still jump at the opportunity to get more of it.

big thanks to rob for the can. had pretty high expectations on this one considering veil and other half, but if history has taught us anything it is that collaborations typically just means too many cooks in the kitchen and/or just weirdness. other half seems to love doing them though and when they are IPAs, they are almost always worth checking out.

initially this was a monstrous disappointment and my first sips were overwhelmed w tropical passionfruit and not much else. as my palate adjusted and the brew opened up it was rather pleasant, but feels like it has no balls...and really could use some bittering on the finish.

it's a nice ipa but just falls off a cliff on the backend of the flavor and feel. worth a taste, but not worth a hunt. smell is soft passionfruit, flavor is nice but not much beyond that. was enjoYong it by the end of the can and wishing I had another...but then again, I love beer. this one reminds me of Debbie downer in that there is something about it that I love, but also something about it that is holding it back from being something really special.

This is an interesting one. Pours a thick, hazy orange that rivals some Treehouse. Smells citrusy and hoppy, however, only the citrus taste shows up. VERY juicy with a tart finish. I'm not sure what to make of the 0 IBU for an IPA, but this is a very dangerous and tasty beer. Very crushable on a hot summer day. I'd rate this higher if the hops played a bigger role.

From a can dated 8/12/16 #SADBOYS. Color is a sickly, opaque dark orange. Sweet and fruity aroma. Flavor is straight passion fruit; tart with a faint bitterness. Mouthfeel is fine, finishes similarly.

The "0 ibu" is a neat marketing gimmick, but this is closer to a passion fruit wine cooler than an IIPA.

Topical Depression from Other Half Brewing Company
Beer rating: 90 out of 100 with 86 ratings