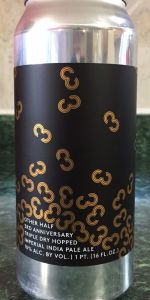 Notes: Imperial IPA hopped with copious amounts of Citra, Motueka, Galaxy, Simcoe, and Citra Lupulin powder. Brewed in commemoration of three years of Other Half.
View: Beers | Place Reviews
Reviews: 44 | Ratings: 321 | Log in to view all ratings and sort

16 oz. can. Hazy pale orange. Smells of zesty citrus. Lime, tangerine, etc. Tastes of the same citrus peel. A little bit of malt, but it dries out. Boozy back end. Medium body. Big on booze, but not on sweetness. Good, but couldn't drink much.

O - alcohol is well hidden, but flavors don’t come together.

Decanted from a 16 oz (473 ml) can into a Tree House snifter; canned 02/06/19 and obtained at the brewery on its release date. Note, my friend got on line at 4:45 am when there were already at least 200 people there (thanks MB!)
A: Pours a cloudy, golden color with a less than one finger head with retention to no more than a rim and spidery lacing.
S: Cracking the can, I got immediate tangerine and ripe peach. Aromas range through tangerine, ripe peach, mango and a very strong showing of caramel. Pine and grapefruit also evident, but in the background a bit.
T: Semisweet. Palate largely follows the nose, drinks down to only a hint of sweet peach and juniper lingering deliciously on the tongue, followed by a peppery close.
M: Light to medium bodied with light to medium effervescence.
O: A complex and evolving flavor experience. Missed it on the 3rd anniversary proper, glad I was able to get to try it.

The nose on this is super tropical. Sweet citrus, mango, pineapple. Hardly any bitterness or present hops.

Damn. Super tropical, lots of pineapple and sweet grapefruit. The citrus here is fantastic. Slight hoppiness on the back end.

Creamy, juicy , smooth, sticky. Everything you want from an imperial Hazy. Awesome.

16oz can into a snifter. Thanks Ryan for sharing.

Palate follows with a huge blast of tangerine, grapefruit, peaches, and lemon up front. Definite mango and pineapple notes give this one a super tropical flavor. There is some dankness in there as well, and sweet bready malts almost matched by a hit of pine resin on the finish. Mouthfeel is medium-full and very fluffy and smooth ... speaking of smooth this one drinks like it’s around 7-8% and the booze is nowhere to be found. Crazy good!!

16 oz can poured into a tulip. Very opaque. Looks like pulpy orange juice. Aromas of tropical fruit, especially pineapple. Taste is pungent tropical fruit...sweet pineapple and some mango. Delicious. Feel is very full bodied. No sign of the 10% though. Overall, very well done beer for the abv. Super tropical and juicy!

A: Pours a hazy, pale orange color with a tight ring of bright white head. Swaths of lacing and very good retention.

T: Again, a melange of tropical fruit and pine/dank hops, finishing with a light lingering bitterness and muddled hop character. Medium-high sweetness brings the flavors together but is a tad too much, limiting drinkability.

M: Medium-full bodied, super creamy, and medium-light carbonation. The creaminess is a bit much, imparting the sense I’m drinking heavy cream straight up.

O: The hop flavor is nice, but they went a bit too far on the lactose. A bit too sweet and creamy.

Great murky color, super smooth! I would have bet anything that this wasn't 10%. Complex, danky, citrus, tropical aroma, and flavors that match. There was an enticing sweetness to the aroma and flavor as well. Made it smoother. Among my top IPAs all time!

murky orange in color, taste is bitter citrus with some sweetness on the backend..this is a bit more dense than most, but that should be expected with a 10% IPA..drinks like a 7 or 8% thou..very smooth scant traces of the 10% ABV..upper echelon Other Half Beer

Very smooth and creamy, super hop aroma and taste that is spectacular. Great haze and foam that lingers. Highly recommended.

Fun beer, but the mouthfeel is a little too much, maybe too much lupulin powder. Mind you, this beer was still tremendous. Not a beer you want to drink all the time, but fun to pull out for an anniversary.

I really liked this one. It's packed with hops and there's Galaxy in there. It's a 10% very high for an IPA and you can tell as the abv is noticeable. I don't think it was necessary to make it that high so i downgraded because of it.

Hazy, bright yellow body with a soapy, bone white head. Grandiose hop scents. Lemon and melon with prominent alcohol in both the nose and flavor. Lovely pineapple notes. That said, the heat doesn't bother me. Tons of flavor. A well executed beer.

Luckily for me I have friends who go to almost every OH release and are good enough to share. This was exactly what I expected. Another very solid - juicy IPA from OH. Not their best - Like Whoa is - but still very good. The NJ/NY craft beer scene is exploding and OH is one of the best. Well done

Taste follows nicely tropical all the way, a nice dose of pinapple and grapefruit in the slightly bitter finish.

Mouthfeel is almost large, moderate carbonation, not dry, but slightly sticky from all the fresh hops, and drinks way to easy for 10% ABV. Seriously insane drinkability!

Overall this brewery has just wowed me once again, I have only had juicy and delicious North American DIPAS from them so far, but all of them have dazzled me. Thanks @Rcruz9230 for another treat!

Hazy orange yellow color after being poured in to a pint glass. Tropical fruit smell with predominantly pineapple. Wonderful taste with nice bitter hop finish but has a balanced alcohol presence. Excellent

Probably the BEST Other Half offering I have had from them....and I have had some amazing Other Half Brews! Huge Juicy Hop Bomb!!! Glad I have a 2nd can to save for another sitting :)

This might have been the beer from Other Half that I was most eager to rate, as there was quite a bit of anticipation for this. Without a doubt, this lived up to those expectations as the beer was one of the smoothest and most complex that I ever had from them, easily exceeding the high standards that they've set over the last three years!

Nice can design to this with lots of "3"'s on it with "It's the Magic Number" on the bottom above the date of 1/27. Of course, the pour was on par with that as the beer had a dank, peach hue to it with a head that held it's own and a nice web of lacing left behind on my Teku glass as I worked my way through this. Wonderful nose here as there was plenty of orange, tangerine, and citrus that could be smelled from halfway across the room once I popped the top. Plenty of those in the taste along with hop oils, pine, resin, a bit of earthy dankness, stone fruit, Other Half's yeast, and some garlic to round things out. Incredibly complex under the surface given how simple this seemed up-front though the juiciness, use of lupulin powder, and moderate, bready malt allowed the full range of flavors to really shine through. A low amount of carbonation and high amount of juicy slickness allowed for this beer to fully shine once it warmed up as the underlying candied sweetness and marmalade allowed everything to mesh well together. The earthy dankness that lingered in the aftertaste served as a metaphoric reminder of how the full range of flavors all left the "party" in unison as the liquid faded away...

This may have been the easiest beer of double-digit potency that I have *ever* reviewed on here as this was deceptively easy to quaff and leaving me want to pop open another once the can ran dry. While I admit that I"m a home for Other Half, it's beers like this that kept me waiting in line for hours and coming back for more. I can only hope that they make me eat my words in 2020 when I say that this may be the best that I've had from them and the apex of their brewing resume up until this point. Cheers to all they've done for beer snobs like myself!

overall this kind of sums up a lot of the OH beers for me. The flavors are on point, especially for a high ABV IPA and the Lupulin powder certainly shines here. It does, however, have a boozy harshness to it that has to take it down a notch for me. I did enjoy this quite a bit, but it was boozy, which I tend to find common with the OH high ABVers. It's nitpicking because it was a really enjoyable beer.

I think this beer is top notch. My only complaint is i think they could hide the 10% heat a little better. Everything is there for this beer great citrus/floral notes and taste great mouth feel, Just tastes a bit boozy. I almost want to put it into the triple IPA category. If it was it would be the best out there.

Big juicy beer - looks like it and tastes like it - opaque gold, grapefruit-orange-looking body, two fingers of off-white foam that slide down the glass with sheets of lace trailing behind. Pungent aromas of rich citrus and orchard fruit, like orange and grapefruit; flavors follow in kind but with tropical impressions like pineapple added to the mix; moderately bitter and sweet, full-feeling and medium-weight, cushy carbonation and soft - yet another NE-style winner - 10% abv and an barely legible canning date - presumably 1/27/17.

Received in trade. Pours a hazy golden straw yellow with hints of orange. Pulp like look in the glass. After cracking the can open you get citrus and light tropical fruit wafting from the can. The nose post pour is fairly bold and large. The nose is of citrus both grapefruit and orange as well as light tropical fruits, pineapple and a bit of very light pine. While the nose is a bolder citrus I felt like I was picking up the tropical fruits Upon first taste, fresh tropical fruit/pineapple juice led way to a citrus pith/rind. At 10% and triple dry hopped plus the addition of Lupulin powder I still feel like I found a bit of a sweet doughy malt hint altho it was very nuanced and disappeared quickly. The alcohol hides well at colder temps but as the beer warmed the alcohol seemed to become more pronounced and a bit hot. I'm not sure the triple dry hop did much for the beer but I get why they did it. Overall it was a fairly smooth with a medium body and easy to drink for a 10% imperial triple dry hopped brew. Very good.

Look is orange juice. It's hazy and super thick- I love it. Smell is very fruity and juicy. I assume that's citra Hops? Taste is also juicy. It's surprisingly not very bitter for a 10% DIPA. World class. Other Half, you rock!