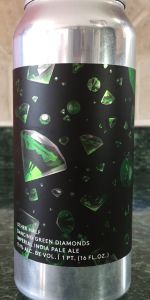 Notes: Dancing Green Diamonds is a NE take on Green Diamonds and is brewed with oats and a ton of Amarillo and Galaxy.
View: Beers | Place Reviews
Reviews: 10 | Ratings: 41 | Log in to view all ratings and sort
Reviews by JerzDevl2000:

Picked this beer up when it was released, as it had a date of 2/10 on the bottom of the can with "Dancing Machine" written above it. Any beer with "green" in the title by Other Half tends to be dank and weed-like but the oats made the difference here as this had a nice, full body to it to round out the sticky and hoppy nature of this beer.

The pour to this was relatively typical for an Other Half beer - hazy, apricot, and with plenty of head. Booze, crystalline sweetness, and some oats in the nose with all of those in the taste. Lots of marmalade, oats, pine, and resin in the taste as this had a dank mouthfeel with a good amount of weed right behind it. Creamy and with a slightly grassy mouthfeel, the carbonation was light to moderate here and the aftertaste had a hint of mint to it since it finished clean and somewhat brisk. A bit of resin was coated my mouth as I could feel a slight warming effect from this.

That was because of the booze - I couldn't taste it but could feel it once the liquid went down. While not Other Half's best or most memorable beer, there was plenty to enjoy here but in the end, this was relatively typical for their offerings. Given how strong their lineup is, that's more than enough to satisfy nearly everyone!

Taste: Grapefruit. Melon. Grass. Marmalade. Caramel. Soggy grains.
⠀⠀⠀⠀⠀⠀
Feel: Medium-light bodied. Creamy. Slightly oily. Sticky. Slight booze.
⠀⠀⠀⠀⠀⠀
Overall: A very dangerously smooth drinking "NE-inspired" IPA. Other than finishing a tad bit sweet and not really being all that "juicy," it doesn't stray far from being both a faithful imitation of Other Half's neighbors to the North and yet another well-executed iteration of their signature "Diamonds" series. The oats do add an interesting dimension in terms of the mouthfeel but doesn't impact the experience too much overall.

Pours a golden yellow with a amber tint to it. Semi hazy with a huge billowy white head. The nose is of fresh ripe tropical fruits, mango and melon. Taste is of ripe mango, honeydew and light stone fruit. A rather large alcohol taste on the palate with this one. Boozy and somewhat harsh on the backend. Minimal malt presence altho light sticky malt can be found. As the beer warms the alcohol comes out even more. A rich creamy mouthfeel that has a semi dry finish. Pros: the tropical nose and creamy mouthfeel. Cons: boozy that causes this beer to feel somewhat harsh at points. Cheers

elnunesio, Feb 26, 2017
Dancing Green Diamonds from Other Half Brewing Company - Brooklyn
Beer rating: 91 out of 100 with 41 ratings