Crickets - Wai-iti
Other Half Brewing Company 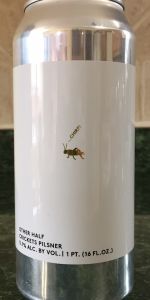 Notes: Crickets Pilsner (5.1%) is brewed with German pils and vienna malt and this batch is hopped to perfection with NZ Wai-iti which gives it a perfect balance between old and new world. We will continue to release different versions of this pils in the future with different hop varieties.
View: Beers | Place Reviews
Reviews: 1 | Ratings: 23 | Log in to view all ratings and sort

Somehow, this ended up lost in my stash as I took a bit longer to get around to this than I should have. It probably didn't help that I had another iteration of this in my queue and that the labels were the same! Regardless of my confusion, this was a solid German Pilsner that had a nice balance to it that was true to form and easy to enjoy!

This had a classic look to it as the liquid was a radiant gold with plenty of fine, hazy sediment in it. A nice head topped it off as the lacing left behind was quite layered and extensive. Lots of noble hops, urine, grass, and potato chip crispness in the nose as the taste was just as notable for being on-point. Much of the latter really emerged as this fully warmed up as the skunky nature of a Pilsner gave way to the crisp, starchy bite that served as this beer's hallmark.

A moderately vigorous carbonation combined with a low alcoholic presence to allow this beer to fully shine through - both in looks and in taste. Canned on 5/02/18 with "SPRING OF PILZ" written underneath that, this was enjoyable enough to have throughout the year, including an odd time such as on a quiet winter's night. Other Half has once again proven that they're more than just flavorful IPA's and bottled Stouts!

Crickets - Wai-iti from Other Half Brewing Company
Beer rating: 86 out of 100 with 23 ratings