Baked Ziti
Other Half Brewing Company 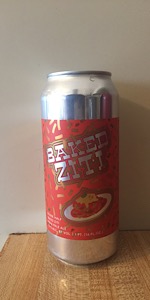 Pours a hazy light orange with soapy head and some floaties.

Smell is juicy and citrusy with notes of pineapple, grass and a hint of biscuit. Very crisp.

Taste is juicy and crisp with a bit of rye as anchor. Notes of citrus and pineapple and something slightly vegetable, with a mild to medium bitterness.

Overall, a very nice IPA, slightly different from the other OH beers I've had.

With a name like Baked Ziti, I expected this to taste a ton like cheese and sauce and to a bit of an extent, this certainly fit that bill. Plenty of pasta could be felt in the body of this beer as there was enough of a vegetal presence to make this feel like it had tomatoes in it as well. Sure, there were a tom of other flavors and notes in this but in the end, this was nearly as comforting and accessible as a warm, home-cooked Italian meal!

Not a bad look to this as the liquid was a muted peach with enough light seeping through it, as the head topping it off wasn't terribly thick. A ton of scattered, bubbly lacing was left behind as it was quite extensive from the top of my pint glass on down. Loads of grass, pineapple,, bright tropical fruit, and some urine were in the nose as the taste was just as strong, fruity, and full of cheese as the nose led me to believe. Stringy and full of deep lactose, the aroma gave way to a body that was moderately chewy, grainy, and oddly reminiscent of the aroma. Plenty of body to this beer as the overt earthy vegetables and subtly slick juiciness felt like tomato sauce that was vine-ripened. Plenty of malt in this as it was quite balanced, although the earthiness won out without any hops in particular standing out in the taste...

There was enough booze to this but with the meal-in-a-can feel dominating, the hops were the last thing that was on my mind. A moderate and persistent carbonation kept this from feeling too heavy as this went down relatively easily from the get-go. Canned on 5/1/19 with "DDH DION" written underneath that, this was a nice beer that could have easily been mistaken for supper. Fun stuff from Other Half that was better in appearance than in taste, but was still a quality brew when all was said and done!

Second brew of the night at Other Half Brewing.
Pours a hazy golden orange color with a moderate and quickly dissipating head. Nice bright look.
The aroma opens with lush tropical fruit, particularly mango, guava and papaya sprinkled with a touch of alcohol. The oat cream adds a milky, vanilla and nutty sweetness.
The taste is dominated by bright and intense hops. Strong tropical flavors and grapefruit rind, combine with sharp pine shavings and a spicy bitterness. A strong malt backbone features caramel malt, its profile adding a modest sweetness that stands up well to the hops.
Medium to full bodied with a moderate and tingly carbonation. Mouthfeel is a combination of smooth and crisp.
A complex and strongly flavored IPA that straddles the line into DIPA territory. A pleasure to sip on.

Baked Ziti from Other Half Brewing Company
Beer rating: 89 out of 100 with 20 ratings