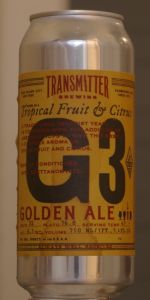 The past couple of days have been an amazing CANmalgam of Goses & Pilsners, but now my supply is exhausted. I had the Duvel as kind of an oddball, but it will lead me back to some of the breweries from which I reviewed beers the last couple of days, including Transmitter, Manayunk (CANayunk), Sly Fox, Conshohocken (CANshohocken), Sloop & Great North. Following that excursion, I will be focusing on imports for a while, bringing me full circle to this one. Stay tuned. It's gonna be CANother wild ride on The CANQuest (tm)!

From the CAN: "Long Island City New York Farmhouse Ales Since 2013"; "Golden Ale"; "Notes of Tropical Fruit & Citrus"; "A traditional Trappist yeast is combined with the addition of American hops to give this beer a complex aroma of stone fruit and citrus."; "Bottle conditioned with Brettanomyces."; "IBUs[:] 32[,] Plato[:] 16.8°[,] Serving temp[:] 45°"; "Always Well Received".

8=O I JUST sent off one of the lengthiest & most challenging Change Requests of my career! This beer is currently identified as a Belgian Saison, but that CANnot be the case as the brewery releases them as "S"-series beers while this one is a "G"-series. G2 negates it as either a Belgian Blonde or Pale Ale. I am reviewing it as an American Wild Ale as a result. Whew.

I Crack!ed open the vent on this CAN & beCAN an extremely slow, gentle C-Line Glug into the awaiting glass since I really had no idea of what to expect. I was trying to maintain a modicum of clarity, but the longer & further that I went with my pour, I realized that it was futile. I ceased everything at that point to assess what I had. It had formed two-plus fingers of foamy, soapy, rocky, eggshell-white head that was quickly fading to wisps. Color was a deeply-hazy/lightly-cloudy Yellow-Gold (SRM = 4 - 5). Nose had the unquestionable presence of Brett., but it was quite restrained, not its usual star-of-the-show extrovert self. I CAN't say that I was getting "tropical fruit" on the nose, so much as peaches! 8=O The citrusiness was more orange-lemon than the usual grapefruit. 8=O Mouthfeel was on the thin side of medium. The taste was clearly NOT that of a Saison! This had a LOT going on, but Saison yeast was not driving any of it. Instead, the brewer(s) must have told Brett. to behave itself or it was going in the corner. This was incredibly tasty! It was like a snack plate at an art gallery opening - I got a cheesiness from the Brett.; a melon flavor of honeydew & CANtaloupe; the fruitiness of peach & pear; the earthy muskiness of papaya; orange/tangerine citrus; white grape & finally, a bit of crackery malt. 8=O

I was classically educated at the local private college preparatory school & inculcated into the fine arts from an early age. It shocked everyone when I chucked it all aside to attend the local public high school & then to enlist in the Navy. I was the oddball enlisted, taking my (ahem!) girlfriends to museums, art galleries, the movies, out to dinner, all of it. I remain rough-hewn, but I CAN mingle in high society with the best of them. I still relish going to gallery openings & simply loading a paper plate with goodies, grabbing a glass of white wine & just going to town.

This beer was WONDERFUL! It tasted like I had shoved all of the CANtents of my paper plate into my mouth at once.

I had a girl do that once & I took her aside & explained that no matter how hungry she might be, a) we were headed to dinner soon & b) that could get us ousted. She nodded & finished, but even I was nonplussed.

This beer is what that must have tasted like. The restrained nature of the Brett. in this one is what really carried the day. I would be very interested to know the malt & hops bill in/of this one. I'm guessing Orval yeast & then the Brett. conditioning. Finish was, interestingly enough, not totally dry but semi-dry on the cusp of dry. 8=O Talk about an amuse-bouche, my mouth was grinning ear-to-ear! YMMV.

On tap at Whole Foods.

S - Bananas and citrus esthers with some yeasty quality.

O - Has a weird off flavor that I can't exactly pin point and it brings the rest if the beer down. Will be more than willing to try this again in the future and adjust my review, the brewery deserves it. Nice fruit character and dig the peppery bite.

From a bottle, pours a hazy gold color with a big full fluffy white head.

The nose is pineapple, tropical fruit, yeast esters, some mango, citrus and other fruit notes. The flavor is tropical fruit, floral hops and earthy notes, a little white pepper and a touch of lemon.

Overall, this good, not great, but excellent fruit flavors with the hop content.

From 09/22/14 notes. Got a bottle of this in their CBS club. 750ml bottle poured into my Transmitter globe glass.

Overall one of their best beers so far, up their with F3. Not a ton of brett but a lot of stone fruit which is good, and a lot of fruits in general. Easy to drink and worth checking out.

G3 from Transmitter Brewing
Beer rating: 87 out of 100 with 26 ratings