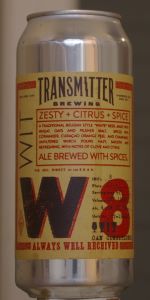 Notes: A traditional Belgian style "White" Beer, made with Wheat, Oats and Pilsner malt. Spiced with Coriander, Curaçao Orange Peel and Chamomile. Unfiltered which pours hazy, smooth and refreshing, with notes of Clove and Citrus.
View: Beers | Place Reviews
Reviews: 2 | Log in to view all ratings and sort

A: The beer is slightly hazy light pale yellow in color and has a high amount of visible carbonation. It poured with a finger high white head that settled down but left a short head covering the surface.
S: Moderate aromas of wheat, orange peel, and chamomile are present in the nose.
T: The taste follows the smell and is quite flavorful with additional hints of coriander in the finish.
M: It feels a bit more than light-bodied on the palate and has a moderate to high amount of carbonation.
O: I found this witbier to be very refreshing and both aromatic and flavorful. I particularly enjoyed the chamomile, which added a unique twist.

The past couple of days have been an amazing CANmalgam of Goses & Pilsners, but now my supply is exhausted. I had the Duvel as kind of an oddball, but it will lead me back to some of the breweries from which I reviewed beers the last couple of days, including Transmitter, Manayunk (CANayunk), Sly Fox, Conshohocken (CANshohocken), Sloop & Great North. Following that excursion, I will be focusing on imports for a while, bringing me full circle to this one. Stay tuned. It's gonna be CANother wild ride on The CANQuest (tm)!

I did some in-CAN agitation before Crack!ing open the vent. I toyed with the idea of an inverted Glug, but I decided against it because a) it came in a 16-fl. oz. CAN, b) I was using a squat Hoegaarden glass & c) that CANbination could lead to a mess that I did not feel like cleaning up first thing in the morning when cartoons are getting ready to start! Color was a deeply-hazy/lightly-cloudy Straw-Yellow (SRM = > 2, < 4). Nose smelled of black pepper, cloves & oranges. It put me in mind of a do-it-yourself project that I did as a wee lad, making potpourri by sticking cloves into an orange. Mmm. Mouthfeel was medium, but it had a wonderful effervescence. The taste was not as intense as the nose had led me to expect. It was spicy, but not spicy enough and even the orange was not as pronounced. This is a style where you really want more cowbell to own the space with it. That simply was not the case here. Finish was dry, thanks to the inclusion of spices, but I just wasn't feelin' it. YMMV.

W8 from Transmitter Brewing
Beer rating: 4 out of 5 with 2 ratings