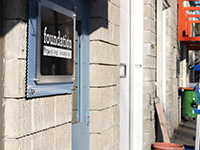 This place was awesome. Was on a vacation in Maine, came to this location primarily to go to Allagash but stopped at each brewery in the area and liked Foundation the best. Awesome sours, they had ipa’s and some Belgian’s when I was there. It was a freakish heat wave while I was there, I bought quite a bit of beer and they let me keep it in their walk in cooler while I visited Allagash. Highly recommend.

Guess I never got around to reviewing this place. Decent amount of parking, plenty of space outside for drinking roped off, rather spacious inside for cans and bottle sales. Always a bunch of beers to chose from with various different styles on tap. Seems to always be at least a few fruited beers and stouts. Beers are always solid enough though most of the ones with wild yeast strains tend to be on the lackluster side. The broad variety of draft and to go selection is always refreshing. Certainly worth hitting up when in the area.

Lots of beers to choose from (10 or so), which you can get in flights, pours or for takeaway. Helpful and friendly bartenders. Tables in and outside, but no table service. Because it's in the Industrial Way brewery incubation "beer park", lots of food trucks pull in with a variety of offerings, and you can walk to the other half dozen breweries there and sample from them as well.

Located in an industrial park - cool vibe and solid staff. Good beer as well as takeaway. They have an inside and outside area - very close to Allagash.

Aug 2018...another stop on the Portland industrial park tour. Get some Allagash spillover here, but still plenty of indoor/outdoor seating to get comfortable. Don't miss the retro pinball inside either. About 10 beers or so on tap with good sampling options. Plenty to choose from for take out and a few shirts if you are so inclined. Good times.

great selection of merch, cans, bottles, growler fills, and pours. Staff is knowledgeable of beers they have, and what's coming up. Food truck is always there, and picnic benches and corn hole outside. Nice mix of customer ages, dog friendly, and clean bathrooms.

Located in a cluster of breweries (Allagash and Austin Street), it is a smaller place serving flights, drafts and growlers. Used to be dog-friendly but no longer probably due to the small size of the place. Beer is excellent IMO.

Hot as heck when I visited a few days ago, but it was a great experience. Staff was awesome; attentive, knowledgeable, and super pleasant and welcoming.
I had only previously tried Epiphany, which I grabbed a (stellar) small pour of when I arrived, but all four beers I ordered in the flight afterwards were great (especially the guava one).
Atmosphere was just kind of there, maybe due to the heat and humidity(?) but overall a really solid experience.

Great beer, cool swag, nice room. Staff were just ok, the patrons at the bar had a very high douche quotient. Great tap lineup across the board, and we took plenty to go. Not a place I enjoyed hanging out, though.

So, this place is directly across the street from the Allagash brewery, which I thought a little strange, but I guess this allows them to pick up traffic from the Allagash crowd. I showed up early 10am for a release of Epiphany and there was a line of about 15 people. they were just selling out of a garage door on the side of the building, nothing else really going on. What was annoying was that despite just 15 people in line, it took about 20 minutes to get beer. I noticed at least 5 people working (moving things around), but only 1 person taking orders. I almost felt they wanted to keep a line for the purposes of having a line. that is a little annoying. I don't know if it was because it was early, but the employees were also not friendly. definitely not a great experience. Beer was also very average.

Small brewery with great beer, knowledgeable and friendly staff. Epiphany is excellent. We visited Allagash, Foundation and Austin St on the same day. Would definitely return.

Nice location with Allagash and Austin Street within crawling distance. Ample seating, good vibe, waitstaff were lively. Good selection of beer and others for take away.

Not much in the way of vibe; it's pretty much just a bay in an industrial building with a couple of tables in a roped-off area as an afterthought. Which is fine for what they're doing there. Quality of the pours I had on-site was excellent, of course, and I should spend as much time writing about that as I'm going to spend complaining about the service but I'm not going to because, um, I'm not going to. Hopefully my service experience was not typical - three girls, each of whom, had THEY tried to buy beer from ME, I would definitely have wanted to see i.d., getting in each other's way and playing with the dogs when they should have been pouring me beer. I bought two growlers, one of which had a couple inches of excess head space and the other of which was unlabelled. Selection was thin which, again, is fine because what they do have is really, really good. Mostly growler fills and a couple of different cans, most of which were gone within a couple hours of opening i.e., before I got there.

Edited to add: BOTH growlers, not just the underfilled one (noted above) were flat the next day- I had pours yesterday so I know they're not supposed to be this limp and lifeless. I'll refrain from reviewing the beer which is too bad because I had hoped positive beer reviews would offset the poor quality and service ratings.

Got there right before closing and was able to get some afterglow. Jessie was very helpful providing suggestions on local beer bars and restaurants as well.

Another brewery in the complex, and again a tiny tasting room is really just the place to purchase your beer and you move out to the garage area or outside to picnic tables within a roped area. Several beers on draft here including 2 prototypes of a DIPA made with different hops - one fruity and one piney. They were both very good. Stood in line for about 15 minutes to get in around 1:00 on a Saturday. Food truck outside if hungry.

Small brewery at the moment so selection lacks a little but you can see good things in their future. The beer they do have on tap is always going to world class. Worth the trip every time

Great little local place. Friendly, welcoming feel. Seems like quite a few regulars filling their growlers for the weekend. Feels more authentic than Bissell next door. Worth coming back every week for a fill.

Vibe was good. Long line to get in but nice sitting area with jovial people once inside. The service was crisp and friendly. The beer was good - very good.

Foundation does some really nice beers and it's well worth a trip to go there. Small, intimate indoor and outdoor areas where you can BS with other Foundation fans. Hope you luck out and get some Epiphany, but their other beers are very good as well. 5/2017. They have expanded onto both sides since my last review. MUCH better tap room area. More extensive lists. Great!!!

What a pleasant surprise. Came for Allagash and Bissell...and left happy thinking it would have been a great stop just for Foundation.
Happy busy vibe, all ages. Quality of place, people,swag and beer was top notch. (One beer "Epiphany" was way world class!) Service was fast, friendly and seemed happy to be there. Good tunes. Good groove.Very good selection of beers with a Saison, an English brown, a black IPA, and American IPA and a Maine IPA.
Not much sitting in an industrial complex...but appearances can be deceiving. This is a great place to try out a very good brewery and some pretty great beers.

It is a tiny place (I'm not sure I'd call it a taproom - tasting space?) with very limited seating, but we visited on a good day so outside seating was also being used. In tough weather, might not be so much fun. On a Saturday morning, it was incredibly crowded, but the line kept moving and people were pretty cool for the most part. A few grumblers but I guess that is to be expected. It wasn't exactly clear where the line went to actually get samples or fills. The beer itself was very good, especially Wanderlust. Only three beers were available from the list of four - I know one was Eddy, one Wanderlust...the other not sure. Partly our own fault, I suppose. Workers were friendly even though they were swamped with people. ALl in all, it was a good stop on the Portland beer tour.

Nice little place. Everything is cramped though. Was going to get another beer but a bus showed up with about 20 people on it. Line was way too long with only one person pouring.

Beers were very good but only four were available.

Stood in line for about an hour for Epiphany (UHMAZING!) and Wanderlust. Staff were very friendly and even hooked me up with some awesome tulips. It helped that the weather was pleasant. Great experience.

Good location with 4 breweries within walking distance. They get a little overshadowed by 2 of their neighbors (unless Epiphany is available in cans). All of their options are high quality with their dry hopped saison named Wanderlust standing out among their core lineup. Outdoor seating, helpful staff, open look at their operation and some nice looking merchandise for reasonable prices. A beer location worth visiting.

Nice little (and I mean little) tasting room. They make some pretty fantastic beers and have a super friendly and welcoming staff. They also allow you to roam around their brewery without supervision which I thought was pretty cool.