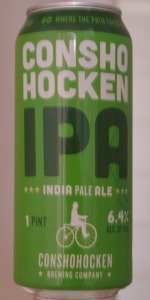 Reviewed by mnj21655 from Massachusetts

3.55/5  rDev -1.1%
look: 4.25 | smell: 3.5 | taste: 3.5 | feel: 3.5 | overall: 3.5
Pours a clear Amber to copper in color with a finger of off white head. Aroma is on the malty side with only a bit of earthy hops. Taste is decidedly malty, both bready and caramel, with a solid bitterness and earthy hops. Decent mouthfeel, medium+ body and moderate carbonation. Overall a fairly average IPA, it absolutely has an emphasis on malt and lacks the hop character I'd prefer in an IPA.
Sep 03, 2016
Rated: 4 by rolltide8425 from Pennsylvania

Reviewed by runondirt from New Jersey

4.19/5  rDev +16.7%
look: 3.75 | smell: 4 | taste: 4.5 | feel: 4 | overall: 4
My thanks to the Conshohocken brewers & owners for providing me with CANs for inclusion in The CANQuest (tm)! I hope to run through a bunch of them today. This should be a good time. Here is another one that got held up due to the lack of an approved pic & which subseCANtly fellout of the rotation. I am almost caught up now, though.

From the CAN: "Go Where the Path Takes You"; "Conshohocken IPA features bold Cascade and Bravo hop-derived flavors and aromas of citrus fruits with a subtle earthy spice characteristic. Combined with a firm malt foundation and dry finish, our IPA makes for a smooth and refreshing drinking experience."

I think that this is my first beer of CY 2016, since I was drinking during the Bowl games, but I gave up shortly after Midnight and did not open any more subsequently. Cheers!

The Crack! revealed another brimful craft CAN, but I have learned my lesson with these guys - Glug gently, lest ye be met with a fountain. This served me well since a) nothing untoward occurred, b) I got a finger of foamy, tawny head with moderate retention and c) the clarity was undisturbed. Color was Amber to Deep Amber/Light Copper (SRM = > 9, < 13) with the aforementioned NE-quality clarity. Nose was redolent with grapefruit-citrus and my mouth began to water. I am a self-avowed hophead, but to eradicate the Bottle Backlog, I have been subjected to every style under the sun except IPAs! Gah! I needs me some hops! Mouthfeel was medium, but the tight CO2 bubbles gave it a prickly feeling on the tongue, along with a slight oiliness. Mmm. The taste was initially quite citrusy, but then I began to get a cool mintiness to go with it. Not really pine, per se, but where was this earthiness that the CAN mentioned? Finish was dry, and I got a woody, oaky flavor at the end, which was a pleasant surprise. I am sure that this was not barrel-aged, but it had a white oak kind of bite. Nicely done!