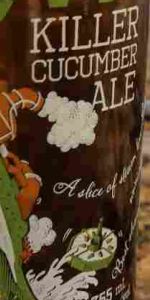 From the bottle, it pours a slightly hazy yellow color with a large white head that slowly reduces. In the nose, you definitely get citrus from the hops, but it is confused by another scent, possibly the cucumber addition. In the mouth, it is definitely influenced by cucumber, with a smooth feel in the mouth.

Steamworks Brewpub 'Killer Cucumber Ale' @ 4.7% , served from a 473 ml can
A-pour is pale gold from the can to a hazy gold in the glass with a minimal white head leaving a fine spotty lace ring along the tulip
S-disappointing , nothing special , no wow factor
T-ok pale ale with a cucumber swallow
MF-mild carbonation , medium body
Ov-just an ok pale ale , possible good fruit & field beer
prost LampertLand

Pours a light gold, straw coloration with a small, fizzy head and visible carbonation. Smells of grainy, biscuity malt, citrus, grass and a hint of cucumber. The cucumber note is stronger on the tongue, but still not all that intense. Taste is dominated by grainy, biscuity malt and grassy, citrus hops, with a good amount of cucumber coming through as well. Finishes quite crisp, with a light bitterness and some more cucumber coming through in the aftertaste. Smooth mouthfeel with a light/medium body and lively carbonation.

This is actually quite well-balanced, with the cucumber lending an interesting, refreshing note to this, but not being too overpowering. Also doesn't have that somewhat astringent cucumber rind note I've noticed in other cucumber beers. Nothing spectacular, but a nice, refreshing summer beer with a slight cucumber edge to it.

473ml can - the march of cucumber brews in 2018 continues unabated!

This beer pours a clear, pale golden yellow colour, with two fingers of puffy, loosely foamy, and fizzy off-white head, which leaves some decent skewed bonsai tree hedge lace around the glass as it quickly melts away.

The carbonation is adequate in its palate-probing frothiness, the body a so-so medium weight, and generally smooth, with maybe a minor veggie acridity making a dent in the surface veneer at this particular juncture. It finishes trending dry, the malt bottoming out, and the cucumber lingering on like the unexpected boss that it is.

Overall - yeah, like a few others that I've had recently, it seems that brewers have found out how to retain the flavours of weak and watery foodstuffs (like cucumber and watermelon), without resorting to artificial enhancers. So, that said, if you like cucumbers, you'll probably like this, but if you don't, well, I'll leave you to do the math.

Crystal clear, bright golden color with just a bit of white foam. Aroma has fresh cucumber and a bit of honey and pale malt sweetness. Taste follows exactly. Fresh, just a bit sweet at first but finish is more bitter with some nice hops on top. Light bodied with smooth carbonation. Overall it's a nice, refreshing cucumber beer but not something to look out for.

Pours with a small head and is hazy and pale in the glass. The aroma hints at the cucumber and little else. The taste is more balanced, although it is really a well made pale ale with the flavour of cucumber. The finish is pleasant with hints of pine and orange. Quite nice really.

Pours from the bottle a hazy golden colour (the label is telling the truth on the colour), capped by a finger or two of quite loose, bubbly foam that recedes fairly quickly to some islands but leaves a lot of lacing. Am I imaging a faint almost greenish tint? Yes, probably.

Smell is cucumber water, with a nice wheat and malt base, and a dusting of light, vegetal hopping. A hint of hay, fresh-cut grass, bitter greens. Taste is quite malt forward--biscuit, grain, wheaty, with some surprisingly substantial hops (in relation to what I expected, anyway)--grassy, vegetal, herbacious. And then a nice crisp, refreshing cucumber accent: strong but not overwhelming. Leans sweet and malty. Has kind of a Belgian feel--wheaty, slightly yeasty. Body is light, carbonation is fairly high.

I confess that I'm a sucker for this sort of brew--experimental, but framed within a very mainstream light ale context. Your mileage may vary, but I am super on-board with this as a summer sipper on a hot day.

Killer Cucumber Ale from Steamworks Brewing Company
Beer rating: 82 out of 100 with 30 ratings