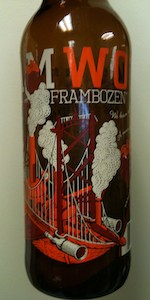 Pours a clear ruby amber with one finger of pale pink head that leaves a few splotchy arches of lace as it recedes.

Smells of raspberry jam on biscuits, and some mild leafy hops.

Verdict: Recommended. Not too sophisticated, but pretty tasty.

Attractive reddish amber with a fine-grained foam in the Maredsous goblet. Warm and malty, but not overly sweet. A woody taste along with the fruit.

Really pleasant raspberry taste with a tangy note. Finishes with a dry edge and just a hint of hops. Yeasty and fruity with a slight buttery note. A nice surprise, and really a decent interpretation of the Belgian brown ale with fruit. From the 22 oz bottle purchased at Bottlecraft in San Diego.

S sour cherries and tart raspberries, not sure what celeia hops are but I'm getting some noble notes, some strange metallic notes and dry cereal

T earthy notes a little weedy, some booze most of what I smell is there with a little less fruit

M medium bodied, a little gritty, on the palate, enough bubbles to fluff it up, sticky on the lips

O not bad but a little average, some strange notes popping up and a little boozy at times

Nothing to write home about but I'm not going to have any trouble finishing the bottle either, just another fruit beer

A- Pours a nice, pink rose in color with a ton of haze in the body. A small to average sized head forms and retains fairly well with a decent amount of lacing. Head is off white to slightly pink in color and reduces down to a layer of film on top of the beer after a few drinks.

S- The scent of this beer is pretty straight forward with big raspberry notes first and foremost. The berries are slightly sweet, but very close in smell to fresh picked raspberries from the garden. Under the fruit is a touch of malt that dries out the sccent a little bit.

T- When the beer hits the tongue, the natural reaspberry flavor comes through first. Right after the raspberries, there is a bit of funk from the malts and just a touch of balancing hops bitterness. Towards the end of the drink, the fruit returns and is a little sweeter than its previous appearance. Lingering flavor on the tongue is of lightly sweet raspberries.

M- On the palate, this beer is smooth and rather thick for the style. It drinks easily despite its weight and hides its alcohol very well. All of the flavors are subtle and not overpowering, so it makes for an easy drink there as well.

Overall, this is a decent fruit beer that is neither strong in fruit, nor lacking in it. The overall impression of the raspberries are subtle and very natural tasting. This isn't a standout beer, but was a good representation of the basis of a fruited beer.

This beer pours a clear, medium magenta colour, with two fingers of puffy, loosely foamy, and bubbly pale pink head, which leaves some decent layered low-lying cloud lace around the glass as it slowly sinks away.

It smells of musty, underdeveloped raspberries, grainy and lightly biscuity pale malt, a twinge of earthy yeast, and really not much else. The taste is bready, mildly crackery pale malt, a growing raspberry pie fruitiness, gritty yeast, perhaps a suggestion of clover honey, a weak flinty stoniness, and plain leafy, weedy hop bitters.

The bubbles are fairly tame in their equally playful and perfunctory frothiness, the body on the low side of your typical middleweight, and generally smooth, the raspberry essence here not really capable of messing things up. It finishes on a strong drying trend, the malt starting to think about announcing that it is giving up the ghost, with the now ethereal raspberry fruitiness having tapped out a long time ago.

Overall, not a bad fruity craft brew, but the middling nature of the raspberries that enable this brewery's temerity to use the 'Frambozen' moniker precludes me from getting particularly florid here. Easy enough to put back, I guess, especially with the well-integrated booze sort of laughing at my naivete - I can't smell or taste it, so why should I even worry, right?

Appearance: The body has an interesting shade of brown with a pink to light red tint. The head is white with a hint of pink which fades quickly. The body is hazy but I can make shapes through it.

Aroma: At first whiff I picked up a very present hop aroma, then the aroma of alcohol followed, and a very rich candy malt aroma floods in. It has a really sweet smelling aroma, like smelling raw malt syrup. The aroma reminds me of something I would personally drink during the Christmas holiday season.

Taste: I'm happy to report that it tastes like raspberries. It has a natural flavor to it. I don't know if there are any artificial flavors used in this beer but it tastes like actual raspberries. There is a bit of malt sweetness following the light tangy raspberry flavor. At the end I am picking up some hop character too. It's a good tasting beer but it's a bit muddy. There is an obvious alcohol presence that keeps popping out and is unwelcome in a paltry 7% beer.

Mouthfeel: The beer has a good body to it which supports the beer well, but it feels wholly under-carbonated.

Overall: It's an interesting beer for sure. It had a good raspberry flavor but it was pretty muddy and didn't have ample carbonation to pop anything particular out of the background. It's not a beer I would look for again but I am enjoying it while I have it.

Appearance: Deep amber with a reddish cast and orange highlights beneath a creamy pink head of foam. The head retention is limited, as is the lacing.

Aroma: Limited but pleasant aroma of berries over a soft malt base.

Flavor: Semi-sweet and just subtly tart raspberry atop a straightforward golden malt base with just a touch of bitterness and some very mild leafy/grassy hops. It's more sweet at the front of the mouth, then more tart and bitter at the swallow, but overall quite similar straight through. It finishes dry with a drop of honey-water sweet fruitiness and some minor leafy and grassy hops that all fade steadily away. The alcohol never appears, but at 7% it shouldn't. Really nicely rounded and polished. Superb balance.

Overall: Middle of the road in berry flavor, sweetness, and tartness but at the same time probably more accessible to the masses, and actually flawlessly balanced. At the very least it doesn't make the mistake of being: 1) too sweet 2) too tart 3) too fruity 4) too malty 5) too wheat - no wheat at all! 6) too hoppy 7) too bitter 8) too carbonated... and so on. One of the better raspberry ales I've tasted. I think the bigger size, and the alcohol that goes with it probably help with that. Worth trying.

Feel: Very light and again, crisp. That word keeps popping up when trying to describe this beer.

Overall: Mad decent. Not too sweet, but could still use a bit more tarty raspberry umph. Light, easy-drinking, crisp, and very summery.

A: Nice slightly red amber colour which serves as a great introduction to the what's to come. Carbonation is light to moderate and results in a very slight head that vanishes rather quickly without leaving any lacing whatsoever.

T: Mostly balanced. A little tart with some raspberries. Some bitterness in the aftertaste.

M: Very thin. Feels like a pilsner but with less carbonation.

O: This is a good beer. I might be a little too used to the similar belgian brews but at least, it doesn't fall in the "tastes like cough syrup" trap. This beer is light and definitely sessionable. I think it is a great drink to have on a patio on a hot summer day and is very worth the try.

Taste: less sweet than I'd expected, and I'm glad. I was worried this was going to be too sweet, but if anything, it could be a TINY bit sweeter.

Would I buy it again? Definitely.

Enjoyed on tap at the brewpub. Pink coloured body with a thin white head. Real raspberry aromas. Initially tart and promissing, a lot of sugar and malt base behind it made this one go the other way. i wanted the tartness. Average mouthfeel, decent drinkability.

On tap at Steamworks, Gastown. Unsure of this year's abv, but when I had it last year it started at 9% and then increased to 12% as they left it in the tank.

Taste: Initial sweetness from the raspberry, then a welcome tartness takes over. The finish is long, with the sweetness returning but in balance with the tartness; at no stage is this beer too sweet. Alcohol is prominent in this rich, gently lambic tasting beer, as well as hints of cherryade helped by the high carbonation.

Drinkability: Perhaps a little sweeter than the previous year, possibly as a result of the hot, dry summer for the raspberry harvest. But the beer is very well balanced with sweet and sour flavour, and still ranks as the best fruit beer I have tasted.

This beer pours with no head and a beautiful deep ruby red raspberry colour. It smells like raspberries and a bit of a belgiany yeasty aroma. The taste is very bitter. It thought the beer would be a little sweeter, being a fruit beer and all. Very cloying and bitter on the tongue meaning this is tough to drink more than one.

A - Clear pink/red with a minimal head.

S - Light raspberry aroma (but not much else).

T - Raspberries of course, and a mild bitterness. Given the focus, I think the raspberry flavour is a bit low.

D - A novelty beer. No off flavours, but not particularly tasty either.

This beer was served in a tulip glass with the reddest colour I have seen in a while. The head was pinkish but the beer looked great. The nose was fruity but not too pronouced. The taste was a nice mix between commercial sweet and artisan sour. Very drinkable and well crafted, this is a different challenge for a Summer Seasonal.

Jul 01, 2005
Raspberry Frambozen from Steamworks Brewing Company
Beer rating: 82 out of 100 with 41 ratings