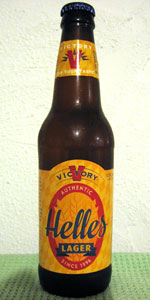 3.73/5  rDev +3.9%
look: 3.75 | smell: 3.75 | taste: 3.75 | feel: 3.5 | overall: 3.75
Two brown twelve ounce bottles emptied into a clear glass liter mug show a brew with a dull golden amber color. There's not much head despite a decanting of near room temperature beer. It's moderately translucent, but there is a mild cloudiness. Malty up front for the nose, there's also some yeastiness as a secondary trait. The aroma pretty much follows through to the taste. It's malty more in an earthy way than in a sweet way, such as a Scottish Ale. There's also a little funkiness to it, like with many European lagers. The body is more than acceptable, for a lager. Fuller flavored than many in the lager family, but unfortunately it's a style that just doesn't get the highest ratings. But, for what it is, it's well done.
Mar 12, 2022
Rated: 3.77 by acurtis from New Jersey

Reviewed by good_to_sea from Pennsylvania

L---Clear, pale golden color. Thin head that faded to practically nothing almost instantly. Left not much lacing. Looks like nothing more than Bud Light.

S---Hoppy. Some earthiness, like grass. A bit floral. A little bit of bready yeastiness.

T---Grass/straw is up front. A light honey spice to it. Excellent balance between hops and malts.

O---This is one to have after mowing the lawn on a hot day. Would definitely like to have another (or 2).

Look is golden yellow with a white thick head.

Taste is typical American lager sweet with a light tang.

Reviewed by ThievingDrunkard from Pennsylvania

Reviewed by fscottkey from New York

M: [3.50] As expected for the style and ABV. Decent body with a bit of prickly carbonation.

O: [3.75] I like this style a lot and when a brewer nails one it is great. This is a really tasty beer. I would session several of these happily.

T: Bright and bready upfront, lightly toasty and grainy with rich honey flavors. Smooth and well-balanced, with a light touch of herbal hop bitterness on the finish. Finishes crisp and clean.

O: A solid interpretation of the Helles style. I would recommend it.

Reviewed by CNoj012 from New York

Smell is bland and pretty one dimensional. I'm getting a lot of straw along with a bit of toasted bread and crackers.

Taste is similar with a bit of citrus and fruity esters from the yeast.

Overall this beer is pretty decent and ticks most of the boxes for the style, but it is fairly bland. I've been drinking a lot of Southern Tier Why the Helles Not (the artist formerly known as Where the Helles Summer) lately and it blows this beer out of the water.

Reviewed by TominGermany from Germany