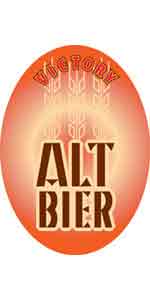 Deep copper/ruby color with a creamy off-white head. Toasted malt, nuts, and grassy/spicy hops fill the aroma. Hop aroma and flavor is a bit heavy handed with the grassy hops really shining through in the flavor. Toasted malt does its best to keep up and does provide some nice balance. Dry finish and very drinkable. Medium bodied and smooth.

After 2 Hill Farmstead beers, a Grimm, and a Jack's Abby, this might have been my favorite beer of the day. Victory nails another German style.

Flavor is dominated by floral hops initially, substantial yeast ester fruitiness, then becomes earthy hop forward, lightly toasted, and fairly bitter and spicy in the finish. Fairly complex, but the esters aren't pleasant, to my palate.

3.65/5  rDev -5.7%
look: 3.75 | smell: 3.75 | taste: 3.5 | feel: 3.75 | overall: 3.75
Sometimes thought of as an amber or red beer except made with all German ingredients and techniques, the fading style of Altbier has always had a for grip on the Dusseldorf and Norther German regions with its "old" style of brewing, but now mainly finds favor with the experimentation of American craft brewers like Victory.

Bright copper and slightly browned, the hybrid-type beer forms a creamy ecru cap, one with great persistence and decorative lace. A stern scent of toasted grain is off-caramel but is nutty, lightly charred, woodsy and crusted. Herbal hops come across peppery, rye-like and grassy while its taste is briskly sweet, again toasty and nutty but faintly honey-like instead of caramelized.

Malt-forward but drying rapidly on the middle palate, the beer's bright malt character is balanced with those grassy and bitter hops. More hoppy than typical compared to German versions, the combination of the fast fade of malt and the snappy rise of hops, the balance rapidly shifts toward the peppery, grassy and spicy bitterness.

A light mineral taste assists the beer's dry and drinkable finish. Closing with a medium body, the beer is as effortless on the palate as pilsner but as characterful as ale. As the bitterness lingers beyond the malt, the taste crispens and lingers with roasted pecan.

Appearance – The beer is served a lighter copper-deep amber color with a one finger white head. The head fades relatively quickly leaving a very light level of lace on the sides of the glass.

Smell – The aroma is lighter overall, but has notes of a lightly toasted bread and a bit of a herbal hop and a light sweetness of caramel.

Taste – The taste is very much as would be expected from the nose. It starts with a lightly roasted bready flavor mixed with a bit of caramel sweetness. The sweetness fades a bit as the taste moves on all while a herbal and slightly grassy hop taste comes to the tongue. These flavors are joined by some more light earthy flavors, to in the end, leave a rather light and crisp flavor on the tongue.

Mouthfeel – The body of the beer is rather light and thin with a carbonation level that is rather average. The thinner body and moderate carbonation are good for the lighter flavors and create a very crisp and easy drinking brew.

Overall – More on the refreshing side, but a little bit low in the flavor profile which all in all makes for a nice easy drinking session brew.

The taste tells the same story- lots of great malt flavors- toasty, caramelly, and a little bit sweet. Some bitterness is provided by grassy earthy and herbal hop flavors. Punchy flavors without being overbearing, given the sessionable ABV.

Another great beer from Victory, would like to see this one again.

Reviewed by Stinkypuss from Pennsylvania

Pours a medium dark copper, with a slightly off white head and leaves lace down the pint. Aroma of herbal hops and caramel. In the flavor, surprisingly hop forward with a firm caramel\toasted malt backing. Resinous, spicy, fairly bitter leafy hops give a bit of oily balance. As the brew approaches room temperature, malty notes of chocolate and nut develop. Finishes with a more or less even balance. Medium to full bodied brew and well carbonated. Overall, this is one of the better altbiers I have come across . Without a doubt, a very good example of the style.

Reviewed by Immortale25 from North Carolina

A- Pours a dark amber color with a 1/4 inch head that soon becomes a thick ring around the edge of the glass and a full sheet of bubbly surface foam. Non-resilient lacing slides quickly down the glass.

S- Bready malt aroma with a mild hop smell and nearly no alcohol.

T- Well-balanced flavor of soft malt and moderate bitterness. Very easy to drink as it should be for only 4.5% ABV. Slightly sweet and refined, almost like a lager which isn't surprising. A bit toasty.

M- Pretty crisp with a small bite from the hops and a medium body. Medium-low carbonation.

O- A fine session beer with plenty of character. Could definitely see myself knocking back a few of these in an outdoor setting.

Reviewed by Thorpe429 from Illinois

A: Pours a clear very dark amber to an almost brown in color (slightly darker than I am used to seeing for the style) with some moderate amounts of visible carbonation. The beer has a finger tall dense foamy off-white head that very slowly reduces to a thick film covering the majority of the surface of the beer and a very thick ring at the edges of the glass. Moderate amounts of lacing are observed.

S: Light to moderate amounts of toasted malts with just a hint of toffee sweetness and a fairly strong aroma of herbal and spicy hops.

T: Similar to the smell, the taste of this beer has a the light to moderate body of the toasted malts with just a hint of toffee sweetness followed by even stronger presence of the hops. There is definitely a strong presence of herbal and spicy hops with moderate amounts of pine and citrus. Strangely, there was just a hint of something that reminded me of star anise in the background.

M: Medium bodied with moderate to heavy amounts of carbonation. Dry in the finish.

O: As someone that has visited Dusseldorf and tasted all of the Altbier available there, this beer has a slightly different twist and a much stronger presence of hops. Enjoyable but maybe not exactly true to the style.