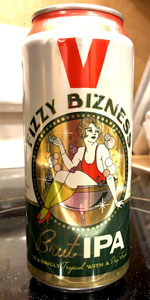 I am truly intrigued by this somewhat new style of IPA. I love the idea of a 'dry' beer that is made so by natural means. I love a dry red wine, one that has just enough fruit to support the tannin and acid. And I love a dry sparkling wine or Champagne, I mean, who doesn't? .... This one is a bit confusing, in that I'm not sure what I'm tasting because I taste corn, hay and other elements of sweetness in other words "anti-dry"! But it has a very neutral finish, although not one that is completely undetectable. There is a little bit of a fullness that one might not expect in a 'brut' style. This being said, it has nice flavor, good body and it pairs well with food, in this case a bowl of homemade bean soup, crusty bread and a sharp cheddar on the side.

On tasting, it's only lightly dry, to be honest it's more sweet. No discernable hop prescence due to age. For all that, it still tastes pretty good. A touch floral, abv well nigh invisible. Clean beer, no aftertaste.

Mouth right around medium. Finish is where the dryness shows up a little, but still a hint of sweetness first.

Overall, I liked this beer. But as it stands, and I dont think this is age related, it's hard to think of it as a brut ipa. But dont ask me what it is lol.

DATE: July 31, 2020... OCCASION: preparing for a shore trip with a beer I saw once, thought was limited, but found later on... GLASSWARE: Duvel tulip... pours a golden body teeming with tiny bubbles that build a healthy snow-white bank of froth... tobacco, funky cheese, banana, grass, lemon zest, papaya, grapefruit and lilac--quite a bouquet of aromas... the first sip is soft and smooth, pillowy and blunted at the finish, recoiling and dry... its body is a bit oily and hoppy, but it belies its 7.2% ABV, necessitating the next sip with allure.... grapefruit, tobacco, dry white grape, toasted cracker, light citrus and pepper make for an IPA that doesn't hit with the impact one expects, and though it eases in on its alcohol, it doesn't have a particularly enjoyable profile... which is surprising, as Victory often delivers on its promises... like the name and the idea, but could use a flavor boost... at its price point, though...

Whew! Having put Jack's Abby in my rearview mirror, for the the time being anyway, it is now back to The CANQuest (tm)! Naturally, this is a CANned beer from Victory as I cash yet CANother check from Hades. Here is the backstory - I was a vociferous advocate of craft beer in CANs from the outset of The CANQuest (tm) as well as a regular fixture at beerfests. I was imploring Bill Covaleski of Victory to CANsider putting his beer in CANs when his fuse finally blew. He whirled around, eyes flashing, and yelled, "Woody, stop it with the CANs! Victory Beer will be in CANs when Hell freezes over!". Inspired, I CANtacted Satan & got a standing CANtract to supply cold-weather gear to Hades. Satan thought that he got a bargain, but I am the one laughing now! BTW, that is an absolutely true story & saw print in Philly Beer Magazine as a part of the Victory Anniversary issue, signed off on by Mr. CANvaleski. 8=)

I was eager to Crack! open the vent on this one since I am one of those people who likes this style of beer. I then went with a slow, gentle C-Line Glug into the awaiting glass to prolong the CANticipation. It foamed beautifully to form two-plus fingers of dense, foamy, rocky, bone-white head with excellent retention, refusing to waver even in the Summer heat. Color was Yellow-Gold (SRM = 4 - 5) with NE-quality clarity & soon, I was joined by The Gelt Gang of Midas, Mammon & Croesus, all hoping for a taste. Nose had an indistinct tropical fruitiness that made it tough to pinpoint specific fruits, but the real star of the show was a vanilla-like sweetness that accentuated the tropical fruit quality. Mmm. Mouthfeel was medium, but soft, very delicate in the mouth & on the tongue. Taste opened with a vanilla-coconut CANbination, slowly ceding to a mango/papaya/guava medley. Mmm. This added up to a very mellow beer, one that was probably a bit too easy-drinking, given its ABV. Finish was more towards semi-dry than brut-dry, but that is forgivable. Did they actually use champagne yeast? I would be doubtful & as such, to expect it to have that level of dryness would be both silly & unnecessary. This was fine as-is. YMMV.

Notes via stream of consciousness: This is the second brut IPA I've sampled this week. Are they making a comeback? I thought they were dead. It's definitely got the look of a brut IPA. It's a just slightly hazy golden body beneath an inch or so of creamy white foam. The aroma expresses malt and dull tropical fruits. It's not a very bright aroma which is somewhat disappointing, but also acceptable according to current guidelines. On to the flavor... the tropical hops come through much clearer than they do in the aroma and it's kind of like cantaloupe and dried candied orange slices. There's a swirl of pine in there as well, and perhaps some melon, papaya, peach, and mango. Apple comes through more clearly, but I'm not sure if that's from hops or yeast. The malt is basic pilsner, and although the label lists acidulated malt as well it doesn't really show it. Ahh, perhaps a bit, but only to keep the malt from becoming flabby. And on that note, it's not as dry as a lot of the other examples I've tasted, meaning that there's residual malt there, not bitterness, although the bitterness isn't that strong either. In the mouth it's medium bodied which is a bit fuller than guidelines suggest but I'm OK with that. And it's crisp, although a bit more carbonation wouldn't hurt. In the end it's a pretty nice pint although fairly basic.
Review #6,976

Poured from a can into a pint glass
Appearance – The beer pours a very lightly hazed yellow-amber color with a one finger head of puffy white foam. The head has a great level of retention, slowly fading over time to leave a great sum of foamy lace on the sides of the glass.
Smell – The aroma of the brew is heavy of tropical fruit aromas of pineapple and papaya mixed with some hop aromas of grapefruit and a little bit herb. Along with these smells comes a little bit of a cracker and a touch of light fruit and must.
Taste – The taste begins with a dry cracker malt flavor that has a little bit of a light fruit taste of pear. Upfront there is a little bit of a herbal and grassy hop along with some of the light tropical fruit that was sensed in the nose. As the taste moves forward the tropical fruit flavors fade a bit all while the pear tastes get slightly stronger. At the same time a bit more herbal hop and a touch of pine come to the tongue and leave one with a crisp and more lightly hopped taste to linger on the tongue.
Mouthfeel – The body of the brew is light and crisp with a carbonation level that is slightly higher. For the style and the crisp taste the feel is good and makes for an easy sipper.
Overall – Not really all that fantastic for the style as it was a bit weak in the hop. It was however more crisp though, so overall it is at least worth a try.

Smell is delicious. Taste is good but sweeter than expected for a Brut IPA.

Light straw, large pillowy head that clings to the glass in globs.

Pear, fresh thyme, buttery white wine, champagne yeast. It’s much sweeter than I expect a beer with brut in the name to be. Perhaps the fermentation was a bit warm; I taste diacetyl.

It verges on crisp, but isn’t. Medium-light body, medium-low carbonation.

I like the idea of brut IPA, but execution in my current experience is lacking from most breweries, including Victory. This is much too sweet and lacks the dry crispness.

Appearance: lightly hazy pale yellow in color with a 1/4" head.

Smell: tart citrus and some spicy hop bitterness rises from the glass.

Taste: grainy malt profile with grapefruit, hints of mango and strawberry, and a spicy hop finish.

Overall: an enjoyable Brut IPA that is slow sipping and has a nice mild dry finish.

Poured from a tallboy can into a Dogfish Head tulip... well within its freshness 'best by' date.

S: Citrus rind and a bit of spice.

Cool find at the beermuda. Pours a hazy bright yellow a ton of head. Smell is hoppy and fruity but taste is some pretty distinct hop profile very herbal. Body is crisp kind of medium body pretty smooth. Overall a different hop experience but still rather smooth easy to crush

Bought this beer at our grocery store and really liked it. It may be more of a summer drink but I've enjoyed it now in October. Nice pale slightly unfiltered color, great dry Brut IPA taste (not tart or bracing), very, very slight fruity overtones that are a positive in my opinion. At 7.5% ABV, it's a little bit stronger than I'm used to drinking. Recommended.