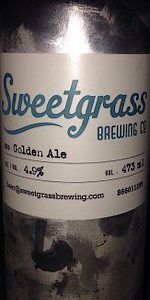 Pours a sparkling golden-yellow colour with streams of effervescence rushing towards the surface, where they merge with the base of a soapy, foamy, persistent white head. It's about one finger high, with excellent retention and a strong tendency to cling tenaciously to the sides of the glass, which also triggers the gradual deposition of a thick layer of lace. A blonde beauty. Not getting much off the nose, save for pale malt sweetness, grain husk, and perhaps a few grassy, herbal notes.

A decent blonde. I can taste bready pale malts, grain husks, lemony citrus and red apple, rounded out by some grassy, weedy, somewhat herbal hop bitterness on the back end. Kind of a vegetal note in the aftertaste, with lingering malt sweetness. Light-medium in body, with average carbonation and a crisp mouthfeel. Very sessionable, and effortless to chug, but not interesting in the least.

Final Grade: 3.47, a passable B-. Sweetgrass Golden Ale is a basic, straightforward blonde beer that drinks well, but doesn't do much to draw attention to itself in a crowded marketplace. Something you could share with the in-laws, or most macro loyalists - or pick up a two-four of prior to a camping trip and enjoy thereafter - but not something that will rouse much excitement from the beer geek set. I'd drink it again, but I doubt I'd go out of my way for more.

Rated by Catzopoke from Canada (ON)

Appearance - Clear pale golden straw color. Some mild levels of visible carbonation and a nice fluffy head that lasts for a few minutes. not much in the way of lacing. Good looking beer.

Smell - Clean and crisp with lots of grain. Some slightly metallic and skunky notes. Nothing too exceptional here.

Taste - Again quite clean and refreshing, some creamy corn flavors to go along with mild grain. Little bit of sweetness and very restrained bitterness.

Mouthfeel - Smooth and well carbonated with a light body. Not much else to go on here.

Overall - Sweetgrass Golden Ale certainly won't turn any heads, but it's a solid and approachable blonde ale without to many frills. If you're looking for something that's affordable and a step above macro lagers, this will certain hit the spot. A brewery worth watching to see where they go from here.

A- Opens well and pours a 1" high white head that lasts for less than a minute before film out. Medium gold colour and filtered clear

S- Not much here at all. Not much at all.

T- Pretty pedestrian and very mass produced flavor. Not a good beer at all. It's a Bud with a touch of a moldy taste to it. The malt is ok which is this brew's saving grace but still not worth more than a 3.0 on the flavor scale.

O- Not so good. Just a mass produced bland North American brew like a Bud. Nothing to write home about and will not buy again.

This ok at best brew went well with....... Yup! You guessed it! Whatever you would pair a Bud with.

Reviewed by peensteen from Canada (ON)

This is a nondescript, inoffensive yet enjoyable Blonde Ale. There is a sweetness in the nose that translates to a mild sweetness on the tongue. Smooth finish with next to no bitterness. This is certainly what I assume falls under the "gateway craft beer" category. It is unlikely I would purchase again.