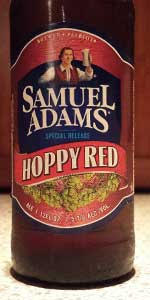 Notes: Amber, smooth, and resinous, this ale was inspired by our exploration of Australian hops. We discovered that their rugged, spicy and piney character brightened a back-bone of roasted caramel malts, creating a beer with surprising depth and smoothness.
View: More Beers | Place Reviews
Recent ratings and reviews. | Log in to view more ratings + sorting options.
Rated: 3.34 by TMoney2591 from Illinois

Reviewed by fedt from Arizona

L: Deep amber in color, pretty thick head with good retention after several minutes
S: Strong piney hops immediately. Some citrus and a sweet smell behind. More citrus notes than your typical Sam Adams beers.
T: Taste starts a little flat, then builds. Malt heavy, then pine, grapefruit, caramel, honey, citrus rind, and juicy pine.
F: Little lighter than I expected, and maybe this would benefit from being higher ABV.
O: I do like red ales that are well-hopped instead of being all malt. This was overall a nice surprise from Sam Adams.

Reviewed by basaywhat from Illinois

Reviewed by secondtooth from Indiana

Aroma: Piney, with tropical Aussie hops coming through well, which to me is very, very nice.

Taste: Plenty of malts here over-reaching the delicious Aussie hops. Seems nicely bitter with a resinous finish, but I still feel the malts here overshadow the hops, that aren’t allowed to shine as well as they should.

Reviewed by MinerBob from Oklahoma

4.31/5  rDev +19.4%
look: 4.5 | smell: 4 | taste: 4.5 | feel: 4.25 | overall: 4.25
Poured out of a 12 oz. bottle into my Sam Adams The Perfect Pint glass. This beer pours a clear, medium amber/copper color with lots of streams of little bubbles rapidly and continuously rising to the beer's surface. Has fluffy white head that's well over an inch thick when first poured with very good retention indeed. The head only started to dissipate after a few sips, and there is good lacing on the inside of the glass. Aromas of slightly toasted caramel malt sweetness along with a bit of peppery spice and earthy, piney hop presence. Has a slightly sweet, toasted caramel malt presence that immediately gives way to a bit of peppery and herbal spice along with a nice piney hop bitterness. The bitterness is fairly sharp here, yet not overpowering at all. Has a crisp, yet frothy and creamy, medium bodied mouthfeel with moderate carbonation. Has a clean, fairly dry finish. Easy to drink in the way good beer ought to be. A solid effort here.

From the bottle: "Amber, smooth, and resinous, this ale was inspired by our exploration of Australian hops. We discovered that their rugged, spicy and piney character brightened a back-bone of roasted caramel malts, creating a beer with surprising depth and smoothness. [undersigned] Jim Koch".

I had pizza for supper and now I am ready to settle in for some beer. I am picking up with their hoppier version of the style, although I have the maltier version cooling now. I Pop!ped the cap and gave it a moderate pour, creating a finger of foamy, tawny head with moderate retention. Color was Deep Amber/Light Copper to Copper (SRM = > 13, < 17) with NE-quality clarity. Nose was mostly piney with some light citrusiness and caramel malt sweetness. Mouthfeel was medium. The taste was an interesting mélange of everything from pine to grapefruit to orange to grass to caramel to bread. I am not sure how I feel about this. As a self-avowed hophead, I like my hops coming head-on, rather than being relegated to a passenger-type role. Still, it was better than a fully malty Red Ale, which is what many early microbrewers made. Finish was semi-dry, passable for the style, but given the beer's name, I was expecting more.

A- The label label looks ok, it's got a pretty simple design and it isn't too eye catching. It poured a nice amber color that took on more of a red hue when held to the light with two fingers worth of creamy light tan head that died down to a thin ring that stayed till the end and it left some nice patchy lacing behind. This is a very nice looking beer, I have no complaints.

S- The aroma starts off with a slightly higher amount of medium sweetness with the hops being the first to show up and they impart a mixture of citrus rind, spicy hop and green hop aromas with the green hops sticking out the most and there's some dank hop aromas showing up in the background. Up next comes a bit of doughy yeast that leads into the malts which impart some typical red ale like aromas with some caramel malt, bready, bread crust and grainy aromas with a little more dank hops showing up towards the end. This beer has a pretty nice aroma, but it's a little to heavy on the green hops for me.

T- The taste seems to be similar to the aroma, but it's a little more lighter and a little more balanced this time and it starts off with a slightly higher amount of medium sweetness with the hops still being the first to show up and they impart all the same aspects with the green hops still sticking out the most, but more citrus rind hops come through this time too along with a little floral hops. Up next comes a little bit of doughy yeast which is followed by the malts which impart all the same aspects that they did in the aroma with the nice toasted malts seeming to stick out the most. On the finish there's a slightly higher amount of medium bitterness with a citrus rind and green hop aftertaste. This is pretty nice tasting beer, the hops work well with the red ale base.

M- Smooth, crisp, a little dry on the finish, medium bodied with a slightly higher amount of medium carbonation. The mouthfeel is pretty nice and it works well with this beer. \

Overall I thought this was a pretty nice beer and it's a nice example of the style, it had pretty much all of the aspects that I look for in the style and while i didn't think the hop profile was the most interesting it still had that nice balance that I was hoping it would have. This beer has nice drinkability, I could drink a couple of them without getting bored of it. What I like the most about this beer is the balance, it's right where I would want it to be. What I like the least about this beer is the green hops, I wish they showed up more in the background to let more of those fruity hops come through. I might buy this beer on it's own and I would turn one down and I would recommend it to anyone looking for a balanced hoppy red ale. All in all I liked this beer, but I didn't love it and I think with a little more work on the hop profile and this could be a very nice beer. It's not my favorite Samuel Adams beer, but it is a nice example of the style. Nice job guys, this is a solid Hoppy Red Ale, keep up the hard work.

Reviewed by Climber32 from New York

4.95/5  rDev +37.1%
look: 5 | smell: 5 | taste: 5 | feel: 4.5 | overall: 5
The red ale I have been waiting for. Amazing body and taste, not too dark and light enough to enjoy. This is a beer to pack while hiking to enjoy at the summit. The flavor profile reminds me of a refreshing walk through a pine forest. This beer is highly recommended to those that want a refreshing beer after a long hike.
Nov 13, 2016
Rated: 3.5 by avisong from Virginia

3.54/5  rDev -1.9%
look: 3.75 | smell: 3.5 | taste: 3.5 | feel: 3.75 | overall: 3.5
Slightly cloudy mahogany-crimson body with a dense, nearly solid, sandy-colored head that leaves spots of lace. The nose contains robust notes of orange peel with a small amount of other tropical fruits and a warm but sharp malt body. The flavor is more straightforward, clashing the orange, grapefruit, and spicy hop bitterness with toasty caramel malts, the bitterness prevailing and leaving a drying bitterness on the finish. The body is assertively carbonated, with a bit of a sticky note and light-medium body.
Points for an assertive and approriately slanted (bitter v. sweet) experience, but it's a bit straightforward. Good to eat with greasy food; it'll cut through and provide decent flavor, but it isn't one with great nuance that you'll regret not mulling over.
Nov 09, 2016

Reviewed by mattroc000 from Florida

4.07/5  rDev +12.7%
look: 3.5 | smell: 4.5 | taste: 4 | feel: 3.75 | overall: 4
A good, fruity, smooth amber ale, it has a bitter, woody, hops-forward flavour. As someone who dislikes pale ales, this is a treat as it has the bitterness of a pale ale without the bile-esque, overly-spiced overtones. There is enough of a malt flavour to hold it together, but it takes a backseat to the hops as you only taste the malt on the finish. The smell is almost exactly as the taste with the exception of even more hops and pine smells.
Nov 09, 2016
Rated: 3.21 by Tee76 from Michigan