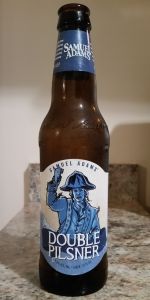 Appearance: Pours a semi-hazy amber color. The head is a finger high, with an off-white shade and a frothy texture. Retention is very good, and hints of lacing are left on the glass.

Smell: For a second, I'd almost think it uses American hops, given its grapefruit character. But immediately after, big notes of apricot, black pepper, and grass remind me of its noble nature. The malt backbone is fairly subdued, but not nonexistent. This isn't a style I usually favor, but I will admit that this smells really nice.

Taste: Hallertau is shown off quite well. It shows off a combination of grass, black pepper, and ginger; but more importantly, it provides significant notes of apricot and even grapefruit. The hop attack is balanced by its bready malt backbone, though a bit of grassy bitterness lingers past the finish. This isn't riddled with the off-notes I tend to get from imperial pilsners, ergo it's pretty damn good.

Mouthfeel: Fuller in body compared with other pilsners (duh), and sweeter, too. It's still a dry and easy to drink beer, don't get me wrong. Put it like this, it drinks the way an imperial pilsner should drink. Carbonation is fairly gentle, as well.

Overall: One of my main beliefs about the biggest craft brewery of them all (Boston Beer Company) is that their lagers are superior to their ales. Another belief is that the Hallertau Imperial Pilsner of days gone by was probably made out of the tears of angels and the nectar of gods. I wouldn't really use that to describe this beer I'm drinking, but I'm still enjoying this one a good deal. It shows off its single hop well without being moronic. Note to Sam Adams: this one is a keeper.

3.9/5  rDev +0.3%
look: 4.5 | smell: 3.75 | taste: 3.75 | feel: 4.25 | overall: 4
DATE: July 1, 2016... OCCASION: Camp Week One, done...and done well... GLASSWARE: 22 oz. pilsner.... pours a staunch two-finger white head that showcases ample spongy froth and proper pock marks... the body is golden orange amber with reasonably sized and paced bubbles... rich Hallertau delivers a punch of flora and equally alluring spruce... lemon, orange peel, and even grapefruit can be detected, making this quite an inviting pilsner... first sip: thick, almost syrupy at the throat, coating the tongue in honeyed sweetness and resin... second sip: a crushing grapefruit and sourdough combination draws contempt from the overworked tastebuds... medium to full-bodied, with the 8.6 % ABV capable of adapting to the flavor profile appropriately... drinks well and swiftly for an Imperial... the hops make for a robust experience, while the bread malts balance the power and ground it at the throat... I like this mix-six, and in particular its bold, alcohol-forward offerings... I applaud Sam Adams for working this into their profile, though I will need to taste the other four before declaring a favorite...
Jul 02, 2016
Rated: 3.74 by wisegreensoul from Idaho

Rated by Dmod81 from Massachusetts

A- pours a clear deep golden color with a one finger foamy white head that retains long after the pour, leaving some lacing behind

T- spicy citrusy hop flavor follow the nose up front, with highlights of orange marmalade, tangerine peel, along with some peppery notes. Mid-palate brings slightly sweet malt that continues through to the finish, leaving a longer if more spicy citrus

M- medium thick body with moderate carbonation leads to a creamy mouthfeel that continues into a viscous finish, light longer of alcohol

O- bold Pilsner with a nice showcase of the Hallertau hop

Smells very sweet and malty with some spicy hops and some stale alcohol.

Body is syrupy and heavy with some stickyness.

This beer is a lot closer to a lagered American Barleywine or a Triple IPA than a Pilsner. Either way I am not a big fan.

Rated by Lingenbrau from Oregon

Reviewed by tempest from New York

Reviewed by t2thebro from Iowa

Reviewed by HiWire from Florida

Reviewed by Beerdrinkin88 from California

Reviewed by trevorpost from Pennsylvania

4.46/5  rDev +14.7%
look: 4.25 | smell: 4.5 | taste: 4.5 | feel: 4.25 | overall: 4.5
Slightly hazy golden yellow/orange in appearance
Aroma is big lemony grassy noble hops. Subtle hints of orange and grapefruit as well.
Flavor is honey and citrus mingling together in a lovely way.
Medium body with a perfect level of carbonation. Not too bitter, but still retaining a big hop punch. Rather dry
In some respects this reminds me of some of the "triple ipas" that people rave about. It has much of that alcoholic sweetness that gets balanced by the lack of residual sugar and bitterness. I'd prefer this to most of those for my money. A very well crafted beer, with a very traditional in approach yet surprisingly modern feeling result with the hops. Best Sam beer I've had in ages.