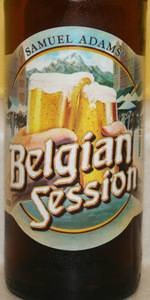 From notes 6/2/12: Pours a clear, golden amber with 2.5 fingers of white, foamy, somewhat lasting head that leaves some patchy lacing. Aroma presents a yeasty spiciness, ripe banana, apple, a hint of coriander, pepper and some cracker/biscuit malt. Taste is thin for the style with fruity esters of watery banana, apple and green plums; slightly dry with almost no pepper or spice accents and at best only a suggestion of caramel. A disappointment.

Poured into a tulip, the appearance was a moderately bright yellow color with a finger's worth of white foamy head that quickly dissipated to leave some gentle sticky lace.
The aroma had some faded grassy sweetness, light bready character, slight Belgian sweetness, some grape skin, light white pepper, and citrus at the very end.
The flavor brought the previously mentioned aromas together adequately - somewhat sweet with a little tang and then some tart and sourdough bread. Mild aftertaste pulled in the tang, bready character and Belgian sweetness.
The mouthfeel was between light and medium bodied with a fair sessionability about it. Carbonation felt fine. ABV felt on par. Light finish on some of the bready malts, and grassiness.
Overall, I can see it as a Belgian pale ale, and I don't mind this for me. Might be nicer with it's respected food.

All the things you hate about mediocre Belgian beers, with none of the upside of the great ones.

This was sort of like Belgian ale -light-. Had one at a social function and enjoyed it but mostly because it was much better than some of the other choices. It was just as advertised,a Belgian turned into a session beer which for most fans of the style it probably won't work. It just lacked the depth,complexity,and flavor associated with this style

Appearance: Mostly clear gold-amber with just the barest hint of suspended sediment when held up to the light. Thin off-white ring of foam with some islands and strands of persistent lacing. Nice colored beer.

Smell: Very little aroma until a solid swirl of the beer is given, and then I can detect some toasted malt notes and some fruity esters, but then it dissipates and I only get a bit of cooked grain.

Taste: Not very Belgian in my opinion. Cooked grains, a bit of veggie hops (older hops are to style for some BPAs, but this isn't quite right), some bit of lemony citrus, and an attempt at some fruity esters, but it doesn't quite work.

Overall / Drinkability: Not something I'd want again by itself. Maybe better with food? A bit of a miss on this beer. BPAs don't necessarily need to be made into a session beer - you sort of want the higher malt and ABV because a good BPA is a good beer to have all by itself and it doesn't need to be watered down, which is what I feel this beer is. Great looking beer, but it misses in just about all other ways.

Unimaginative and average for a BPA. But 1300 ratings in 4 years indicates Sam's marketing. If he can introduce the masses to BPAs, power to 'em.

3.25 A: Clear medium orange color. One finger of frothy white head. Retention is not quite average and a short ring of lacing is left behind.

3.25 T: Like the nose, the taste is subtle and mild. Bubblegum, apricot fruitiness, peppery spicy yeast. A bit more bitter than I was expecting, but still mild. Bready and biscuity malts.

3.5 D: Decent beer, but I feel that if they beefed this up just a little bit, it would be very good.

T: Light bubblegum, some citrus, a little bit of bitterness. Nothing really stands out and flavors aren't that strong. Nothing bad in it though.

F: Moderate carbonation. Dry up front. It is "refreshing" as my wife that just walked into the room and took a drink said.

O: I haven't had too many Belgians before, but this one doesn't seem to have quite the flavor profile that I remember from others I have had before. Not bad and it is very drinkable, but just seems a little bland for a Belgian-style. I'll mark it up a few points though because my wife who never drinks beer liked it.

Aroma: Sort of pear-type aroma along with a whiff of malt sweetness.

Taste: Some candied sugar, fruits a la pear and grape, some spiciness.

I'm surprised this is rated so slow because it tastes exactly like I thought it would when it is called a Belgian Session beer. It's fantastically crisp with light notes of Belgian yeast, honey, and clove. Everything is subtle and amazingly drinkable

Good beer. It would be rated higher if SN, bells or founders brewed it but most BA's are overly pretentious towards boston beer co imo.