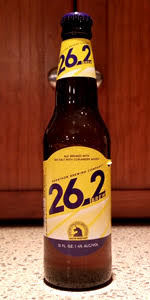 Notes: 26.2 Brew is a new take on a beloved beer originally brewed in 2012 for the Boston Marathon. Brewed with Himalayan sea salt and coriander, 26.2 Brew is a crisp, light ale developed for runners, by runners. Shelley Smith, a brewer and marathon runner, developed 26.2 Brew out of her passion to help runners celebrate with the most refreshing beer possible.
View: More Beers | Place Reviews
Recent ratings and reviews. | Log in to view more ratings + sorting options.
Rated: 3.81 by TMoney2591 from Illinois

Reviewed by MUTINY from Virginia

A: Pours a slightly hazy straw with 1/2" loose white head that recedes immediately. Retention and lacing aren't great, although not out of line with this style.

T: Bread dough maltiness with a growing sense of saline across the mid palate. Finishes abruptly with a barely detectable sense of spiciness. Very restrained and effective.

M: Light and soft with low-ish carb. Thirst quenching, and well suited to the flavors.

O: Clean and easy to appreciate, not at all sour-leaning - closer to Off Color or Sixpoint in terms of the focus being more focused on salt and refreshment, rather than say Anderson Valley and their much more pucker-inducing interpretations.

S: Not much of an aroma. Light citrus and coriander maybe.

T.F: Light and grainy. Short on flavor... a bit of coriander. Thin bodied. A little salt at the finish.

O: Poor at best. Doesn't taste like much... wouldn't have another.

"Ale brewed with sea salt with coriander added." (There is no mention that this is a gose or anything like that on the label). 4% ABV.

AROMA: Pale malted barley (2-row or 6-row; I'd bet on the former). Pale malt sweetness. Not getting any overt salt or coriander.

TASTE: Pale malt. A blip of salt. That's about it. Tends a bit syrupy and sweet for a pale lager.

TEXTURE: Smooth, wet, medium-bodied (where it should be light-bodied), not very refreshing, overcarbonated.

OVERALL: An unremarkable lager that seems to be selling itself on vague athletically focused marketing. Not a beer I'd buy again even at $4 per sixer.

Aroma: Strong aromas of dank, wet cut grass, hay, and lemongrass. A little skunk. Some cooked vegetables and dank corn too. Some toasty German malt sweetness underneath of honey and toasted bread. A little grainy yeast. (4.0)

Flavor: Flavor is much different than the nose. First I get a lot of peppery and grainy yeast. There is some grass and cooked vegetable. but then as it foams in the mouth it turns into a salt and wheat flavor. As it evolves, just more salt and bread with very mild citrus and spice. I don't get much coriander, if any. It's subtle. Finishes with salt and grains. (3.75)

Feel: Lighter-bodied, but the yeast and salt make it foam and full on the mouth. Finishes w/ a slight salty and subtle yeast bitterness. No detectable alcohol. (3.75)


Overall: A good representation of the style. Nothing is overwhelming. Interestingly, it smells much more like a German Pilsner, but then on the flavor it does the salt and spice just right for a Gose-style. A well-made and nice representation of an often overlooked style for a macrobrewery. (Final Rating 3.86)

Reviewed by vette2006c5r from Minnesota

Notes via stream of consciousness: So I've been deceived! This is not really a Marathon Brewing Co. beer but rather just a secondary brand of Boston Beer Co. That sucks. Let's hope the beer is good. This one is brewed with sea salt and coriander so I'm guessing it's a kind of Gosebier but we'll see. It's poured a hazy deep golden body beneath a half inch of bright white foam. The aroma is sweetly malty and lightly fruity but I'm not finding and coriander or salt. On to the flavor... well the aroma pretty much sums it up. The malt is grainy, bready, lightly caramelish, and even a little nutty. I'm guessing it might be close to 100% pale ale malt with a small percentage of light or even medium caramel thrown in but who knows. It's sweetish, and it seems a little bit unbalanced. I'm getting some salt, which is OK, and a touch of coriander. The fruitiness is like pear and apple with a touch of red berry in the background. It's got a moderate bitterness, and it finishes with some residual maltiness, salt, and a light bit of spiciness. I wish there was a little bit more bitterness to it, or even just some more crispness from carbonation, but maybe as I progress through the glass the spiciness of the coriander will build a little bit and give it some more balance. This is only 4% which is nice, and given that combined with the maltiness and yeasty fruitiness it reminds me a little bit of an English bitter, except with salt and coriander thrown in. Looking into the bottom of the bottle I see there's some sediment there, which is interesting. It's medium bodied with a standard carbonation. It just occurred to me, I think this is the standard Samuel Adams yeast. I could be wrong, but it reminds me of some of their beers. OK, so what to say about this. For starters it's OK. It's certainly not bad but it's certainly not fascinating either. It's just a standard ale that has a touch less alcohol to it than most. The salt and coriander give it a little bit of a twist, but again, it's not that interesting. Secondly, I'm a little confused by the name. Given that it comes from the Marathon Brewing Co. and it's name is "26.2 Brew", which corresponds to the 26.219 miles in a marathon, and it has salt in it - I thought it would be more or a light and 'healthy' beer but this doesn't seem to be like that at all. In my head I thought it would be at least a little something along the lines of Dogfish Head's "Sea Quench Ale". It does list its calories at 120, carbohydrates at 9 grams, and protein at 2 grams. Ahh, I guess I should mention the fat at zero as well, although there's normally no fat in beer; however, seeing as how brewers have started doing weird things like adding Scrapple, fried chicken, and Taylor brand Pork Roll to their beers it might be of relevance now. Final conclusion? Nothing special despite the salt and coriander.

Reviewed by jdhilt from New Hampshire

3.64/5  rDev +1.1%
look: 3.5 | smell: 3.25 | taste: 3.75 | feel: 4 | overall: 3.75
Poured from a bottle into a pint glass
Appearance – The beer pours a light golden color with a one finger head of fizzy white foam. The head fades very fast leaving just a trace of foamy lace on the sides of the glass.
Smell – The aroma of the brew is strongest of a grainy cereal smell that is mixed with some seawater smells. Along with these aromas comes some light smells of cereal and bread.
Taste – The taste begins with a lighter bready tastes that had some caramel and grainy flavors mixed within. Right from the start there is a seawater taste in the brew, with this flavor getting slightly stronger as the taste advances. The malt and salt taste hang on the tongue at the end, and produce a rather easy drinking and flavorful taste to linger on the tongue.
Mouthfeel – The body of the brew is light and thin with a carbonation level that is on the average side. For the light bready flavors of the brew mixed with the light salt flavor, the feel is rather nice and makes for an easy drinking brew overall.
Overall – This is actually quite flavorful and refreshing overall with a nice flavor. Great for a summer weather and some sessioning with friends.

Rated by Slowjamcdub from Kentucky

Taste more raw bread dough, cake batter, and that light lemon gives me a lemon cupcake batter with a touch of tartness, very light touch of salt which could use more for the style, no other spices, a touch of a light soft lagering, mild sticky sweet finish, bit more batter lingering

Overall not that great, it's light which is OK but this was too much of nothing, missing some good components of gose, that being said it wasn't terrible, just missing the extra things to make it great