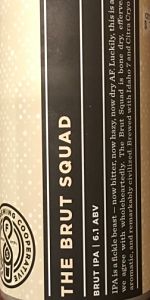 A thanks to the amazing woodychandler for this beer. Poured from a 16 oz. can. Has a bright golden color with a 1 inch head. Smell is of pineapple, citrus. Taste is citrus, spices, a touch of grapes, mild bitterness, finishes dry. Feels medium bodied in the mouth and overall is an enjoyable beer.

I am really enjoying the brut style thus far - this is a particularly decent specimen, quite dry, light, and still enjoyably sweet. I love how clean it finishes. Beers like this are so crushable that I need to avoid them.

If you CAN remember as far back as New Year's Day (2019), you may recall that I rang it in with some AmeriCAN Brut IPAs. I learned that I like the CANcept of the burgeoning style & also that not all of them are created equal. I was on a CANQuest (tm) treasure hunt yesterday afternoon at Dominion Pizza when I saw this & snagged it for inclusion.

From the CAN: "IPA is a fickle beast - now bitter, now hazy, now dry AF. Luckily, this is a trend we agree with wholeheartedly. The Brut Squad is bone dry, effervescent, aromatic, and remarkably civilized. Brewed with Idaho 7 and Citra Cryo hops."

I love hearing the Crack! of a CAN's vent being opened & this ocCANsion was no exception. It came in the recently-established industry-standard 16-fl oz Pint sized CAN, so a C-Line Glug was much more appropriate than an Inverted Glug. Boy, did it want to foam! It released just over three fingers' worth of dense, foamy, rocky, bone-white head with great retention, leaving loads of sticky lacing in its wake. Color was a gorgeous Gold (SRM = 5) with 24-karat clarity & if you don't think that The Gelt Gang of Croesus, Midas & Mammon was excited for a taste, you've got another think coming. Nose had a more pronounced hop presence than in the ones a few days ago, IMHO. Here, there was no question that it was an AIPA of some stripe. It was very floral, almost like it had been wet-hopped, with a decided pine mintiness. Swoon! Mouthfeel was medium, about on par for the style. The taste was yet another revelation! It was cool, but not overridden with pine. Instead, it had a pleasant mintiness coupled with a light vanilla sweetness. It was quite unique in my albeit limited exbeerience. I allowed subsequent draughts from the glass to swirl & warm in my mouth & on my tongue. A slight woodiness also began to appear as a result.

I remember a like taste from a high-end white wine many years ago during a tour of CA's Wine County, N of SF. We were looked at as plebeians until they realized that all of us had money & (kind of) knew what we were tasting. How interesting that this flavor profile has come to beer!

Finish was dry, veddy dry. I've had Gin that was sweeter! My uncle tells of his first batch of homebrewed apple wine that he allowed to ferment to the point that it was like dessiCANt. This was not THAT dry, but it was still unquestionably dry.

I think that I amy have found my new favorite style! I detested Cascadian/Black IPAs when they first appeared (& thankfully have mostly gone away) since the roasted malts only got in the way of my beloved hops. Here, the hops were front & center with the yeast as the major seCANd fiddle. Mmmm.

16oz can. Poured out a hazy, golden yellow color with a small, white head of foam. It smelled of caramel, orange, pineapple and mango. Sweet tropical fruit taste with caramel and a dry, crisp finish.

Canned 8/23/18, wish I drank this earlier but I've only had it for a few weeks, wish I checked the date before purchase

Overall meh, maybe I need to have this fresher but seems like misses the brut style and hops were lackluster

My first Brut IPA, so I don't have anything to compare it to. It's very light, light in color (nice head and lacing), light in body, and light in taste, in the best possible way. It's quite dry. I'll gladly have more of this!

Pours a clear golden with tons of bubbles and a white head. Super hop forward on the nose and in taste. Effervescent, refreshing, and very dry. Best brut IPA I've found.

Decanted from 16 oz (473 ml) can into a snifter glass; production information on the bottom unintelligible.
A: Pours an increasingly hazy, yellow with a one finger, foamy white head with fair retention and lacing.
S: Floral. Light aromas of pitted fruits, especially ripe peach, orange/lime, and sauvignon blanc grapes.
T: Semidry. Orange/lime, pine and grapefruit (stronger here than in aroma), and sauvignon blanc grapes. Bitterness seems as if derived from white pepper.
M: Light bodied with moderate to strong carbonation. Refreshing.
O: Great example of the style.

With the style overhaul in the rear-view mirror, it turns out I have never had a beer that falls into the newly designated American Brut IPA category... Remedying that situation with this Brut IPA from Fair State Brewing Collective - another first, as this is my first beer from their brewery...

Poured a deep yellow with faint haze and a big fluffy head; bubbles effervesced from the bottom of the glass while the head receded and left foam sheeting down the glass... Brewed with Idaho 7 and citra cryo hops, the beer had a floral and citrus aroma, with impressions of grasses and herbs, and maybe even a little dry funk... The flavors matched the aromas, but the citrus was muted and mild, and the herbal and grassy elements came forward more... There was a distinct "barnyard" character that reminded me of some saisons and brett-beers I've had in the past... The bitterness and sweetness levels were both mild, and the carbonation added to a soft, smooth, highly drinkable feel... Light-bodied and drying on the finish, it presented a very graceful beer... Definitely recommended, and a good entry point for the style... 8/23/18 canning...

A: The beer is slightly hazy yellow in color and has a moderate amount of visible carbonation. It poured with a quarter finger high white head that died down, leaving a thin layer of bubbles covering the surface and some lacing on the bottom edges of the glass.
S: Light to moderate aromas of oranges and tangerines are present in the nose.
T: Like the smell, the taste is packed with lots of flavors of citrusy hops.
M: It feels light- to medium-bodied and slightly "juicy" on the palate with a moderate amount of carbonation. There is some dryness in the finish, which becomes stronger as the beer warms up.
O: This IPA has an interesting combination of juiciness and dryness.

16 oz can poured into a Pilsner glass.

Taste
Peach, passion fruit, and pineapple. Clean crisp carbonated water with touches of candy sugar. Some pine resin and dank stick around after the dry finish.

Overall
Extremely dry and Champagne-like as I was led to expect. A nice change of pace from the New England IPAs. This was my first Brut IPA, but certainly not my last.

This beer pours a lighter golden color. Somewhat murky, but not extremely so. The head is white, 2 finger, frothy, with great retention. There's nice lacing on the glass.
The nose is really powerful. I got a good whiff of it when pouring. Up close it has a nice grapefruit aroma. Really pleasing.
The taste - Up front is a bit mellow, then the hops really kick in on the backside of this beer. Grapefruit seems to be the flavor to me.
This beer does really linger in my throat. There's a nice feel from the carbonation. The can says it's a "dry" beer, and I'd agree. Nice full body.
This is a damn good beer, and I'd buy another 4 pack of it, for sure.

Poured from can dated 8/23/18
Straw colored semi hazy appearance
Slight pineapple aroma not much else
Hoppy as in citra cryo and Idaho hops
Prickly mouth feel very dry and astringent 6.1 ABV
Fairly easy drinking but not much going on in my opinion. It’s a good representation of an IPA style of beer


The Brut Squad from Fair State Brewing Cooperative
Beer rating: 90 out of 100 with 39 ratings