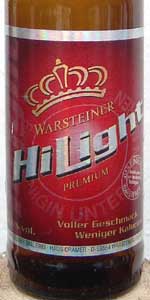 Notes:
View: Beers
Reviews: 4 | Ratings: 6 | Log in to view all ratings and sort

Appearance: Pours a light yellow body as clear as the bottle that housed it. Topped with a smattering of white suds.

Taste: Sweet grains given an added bonus dusting of powdered sugar. Mercifully, there's only a touch of skunkiness from these clear bottles. No apparent hop flavor, but you are treated to a very low hint of bitterness. Still finishes sweet though.

Drinkability: Unenjoyable and unrewarding. It's blandly sweet with nothing else to offer. Whisper sweet nothings into my ear, but don't pour'm down my throat, please.

Had in in pilsner glass in a turkish restaurant in berlin. Not bad but not too good either. Decent carbonation but a little light for my taste. Not one I would recommend highly but I have seen minikegs fo this in the states which could be fun for a party.

The aroma is watery and slightly sweet with a hint of latex. The appearance is light pale gold with a small head. The flavor is sweet and malty with a hint of bitterness but it's mostly watery. The palate is like water. This is basically a beer flavored water but very refreshing and easy to drink. As a low calorie beer it's better than the competition.

Appearance - a neighbor handed me one of these during a cookout tonight. Turned out to be quite appropriate, this being the month of Halloween and all; I was nearly left huddled and shivering in a corner afterwards (sense of foreboding...)

No glasses handy, this has a sickly pale yellow greenish cast due to a bottle that I think is slightly tinted green (that better not be the beer, anyway). Though there were no bubbles in the bottle, as it was comsumed a decent collar hung around later on.

Aroma - skunky stuff, the light does nothing to stop lightstruck beer from happening, and I'm thinking as new as this beer supposedly was, it didn't take much.

Taste - pretty much like the nose. Skunky, but thankfully thin enough and bland enough to choke down. On draft or in cans this may be more palatable, but these bottles are probably the worst way to have this beer. The light flavor doesn't hang around long but I still have a skunkish aftertaste that is unpleasant.

Mouthfeel - thin and crisp as it should be. Watery body, these babies are 8 bucks a sixer, for what? Image, that's all I can figure.

Drinkability - Warsteiner has some good beers; this isn't one of them. That's not to say this won't be a smashing success, heavy marketing budgets have a way of telling the masses what to like, eh? Have one for posterity and move on to something better.

Warsteiner Premium HiLight from Warsteiner Brauerei
Beer rating: 2.3 out of 5 with 6 ratings