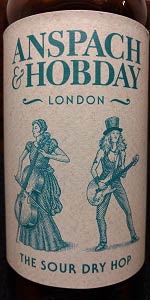 3.52/5  rDev -9.7%
look: 3.5 | smell: 3.25 | taste: 3.5 | feel: 3.75 | overall: 3.75
440ml can from Oddbins:
Pale amber & fairly clear with a thin, bubbly white surface lacing that wasn't the greatest. It was subtly funky & sour on the nose initially, slowly opening up to reveal some zesty lemon & citrus notes but it could have been stronger; there was a light bitterness at the end too though. The taste was a little more pronounced with the sour lemon & citrus flavours upfront that were quite funky, a little tart & acidity showed in the middle with some wild yeast & lime but it was a little one-dimensional at times. It was obviously sour with a sharp, lively feel that was well carbonated with a light-medium body that was dry & quite tangy; not bad overall but not the most adventurous Berliner Weisse either.
Feb 14, 2021

Rated by Bruno74200 from France

Rated by sd123 from Georgia