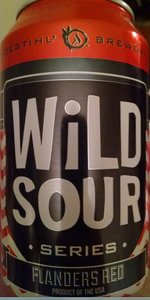 Notes: Flanders Red is an acidic, sour ale with an initial impression of tart cherries and sour candy that dissipates into a complex palate displaying both a sharp lactic sourness with a backbone of caramel and biscuit malt profiles and minimal hop character. The dry, wine-like finish accentuates the complex malt profile and bright fruit notes showcased in this brilliant red colored hybrid of a modern Flanders and a German-style sour.
View: More Beers
Recent ratings and reviews. | Log in to view more ratings + sorting options.
Rated: 4.14 by LXIXME from New Mexico

Reviewed by Jmsandberg17 from Missouri

Reviewed by Mavigo from Michigan

Reviewed by Elemental19xx from Illinois

3.44/5  rDev -9.5%
look: 3.75 | smell: 3.5 | taste: 3.25 | feel: 3.75 | overall: 3.5
Decent but nothing extraordinary. Just kind of an average sour for me, definitely nothing to write home about. If it was there at a party or something id drink it again but i would not go seeking it out. Overall its just an "ok" sour. Light amber red color with a little head that disappears quickly. Smell like maybe a bing cherry or something to that effect, not easy to distinguish. Tastes pretty sour at first but has a dry sweetness towards the end. Medium-light carbonation makes it a little better.
Jul 06, 2021
Rated: 3.75 by BeerDreadz from Florida

3.91/5  rDev +2.9%
look: 3.75 | smell: 4 | taste: 4 | feel: 3.75 | overall: 3.75
It may not have been brewed in Flanders, but by looks, it could pass. It's got that brownish red hues, or is it reddish brown? This one has no lasting head. What it has is a solid malty sour aroma, almost like a good balsamic vinegar, promising. It tastes more malty than sour, but it's not bad. There's a nice connection between carbonation and sourness going on here. But overall, it's a little light in taste and overall mouthfeel than the best in this style. Nonetheless, thumbs up to another in the Wild Sour series.
Jun 24, 2021

4.06/5  rDev +6.8%
look: 4 | smell: 4.25 | taste: 4 | feel: 4 | overall: 4
Clear deep red appearance with an average size beige head and modest lacing. The aroma lets you know it's a sour from an arms length away. Beneath that there are cherries, plums and spices. Taste is a solid sour as opposed to tart, yeasty and fruity but not in a hoppy way. Malts add depth while staying in the background. Sharp, dry, acidic aftertaste.
May 18, 2021
Rated: 3.54 by Ernald_Elbertson from Delaware

Look: Has a deep, reddish amber color with near clarity. There was a tan colored head on the pour, but it dissipated to nothing.

Taste: Much more acidic than I expected. It's entirely possible that it has not aged well; I don't remember how this compares with when I first tasted it upon purchase. It has also been a while since I had a Flanders Red Ale so my palate probably needs some readjustment. Regardless, I like it. Up front, it's fruity and has notes of caramel malt sweetness not unlike a brown ale. Then the strong acidity comes through quickly, and leaves a mouth-puckering dry and tannic finish.

Feel: The mouthfeel is medium. Has good carbonation.

Overall: I think that this is a nice Flanders Red ale. Nice carbonation, sour, and delicious.

Reviewed by spectru from Florida

Reviewed by ilikebeer03 from Texas

Notes via stream of consciousness: I've been holding of on trying this for fear that it'll be disappointing. I just can't see how they could make a decent version of a Flanders red but we'll see. I'm consciously trying to clear my mind and put that preconceived notion aside. OK... well it smelled pretty good pouring it, and it's got a nice very deep copper / almost brown colored body to it. The light tan head rose up quickly with a lot of fizzing (it sounded like I'd poured a can of soda) but it dropped before I could even get to this point, and I type pretty quickly. There's certainly the suggestion of acidity in the aroma, and a bit of caramel. There's a little bit of fruit to it (cherry, plum) as well, but not much, and no oaky woodiness at all. On to the flavor... it's quite thin, both in flavor and body. That's probably at least partially why the head immediately dropped. It's quite sour upon first sip, and the only thing I really get from it otherwise is a light bit of caramelish malt and hint of cherry. Ahhh, there's a very light suggestion of chocolate floating somewhere in the background as well. I feel like they've done an OK job with the malt, but it's not quite there; it's just not rich enough. So I'm just going to go out and say it right now, I was not wrong about this. As a Flanders red it falters (I've judged home-brewed versions that were far better than this), and simply as a sour beer it's lacking as well. Quite often when I review a beer that doesn't quite make it stylistically I turn the tables and look at it from a hedonistic point of view (I learned that from Michael Jackson, because as he noted, until recently it was never about trying to replicate a style). With that said I don't really feel any need to go on. If you're familiar with the Flanders red style avoid this unless you just want to give it a shot, and if you're a fan of sour beers and think that maybe you'll still like it I suggest you try a single can before investing in a 6-pack.
Review #7,094

3.81/5  rDev +0.3%
look: 4.25 | smell: 3.75 | taste: 3.75 | feel: 4 | overall: 3.75
Pours a very dark ruby red with a slightly tan head that dissipates quickly. It has a strawberry/cherry sour "red" smell to it with a musty funk to it as well. The taste is sour up front and it's followed by that same red fruity flavor with a very crisp and fry finish. It's sour and acidic but not toe curl inducing. As stated before it has a very crisp and fry finish and drinks more than easily. Overall not bad at all and definitely one of the better brews from my hometown.
Nov 09, 2020
Rated: 3.86 by MJSFS from Florida

Very limited caramel malt sweetness is surrounded with ample sour cherry, sour apple, and dry white wine. Not quite malic-acidic, but about as acidic a brew as I've had recently. A bit out of balance.

Too sour, even for the name and the style. But still a decent brew.

It is certainly interesting to see a Flanders style beer readily available like this, so it gets point for that alone. I could see this being someone’s first foray into sours

Pours a reddish copper with a finger of tan head that fades fast, no lacing

Very jammy in the aroma, with big notes of raspberry, strawberry, and plum, with supporting notes of vinegat and honey

This one shifts in flavor compared to the aroma. I still get heavy and tart raspberry, but it’s more so a dry pear character backed with light malt, cherry, and lemon. Quite tart almost to the point of being overwhelming

The tartness is amplified further by some hefty carbonation, though it makes for a refreshing beer, especially in combination with a light/medium body. This finishes slightly sticky and a tad funky

Is this a superior Flanders? Nahh. But it is definitely something accessible and refreshing, so I’m glad to have picked it up