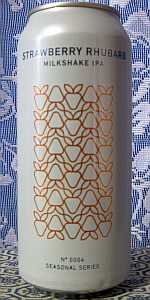 Notes: A juicy, citrusy IPA with tropical hop flavours and lactose sugar that balances the bitterness. A generous amount of strawberry and rhubarb were added to the fermentation to give the beer a strong fruit back bone that's subtly sweet and yet a little tart.

473 mL can from the LCBO; dated Mar 19 2019 and served barely chilled. Their London Stout was pretty good, particularly by macro standards, but a milkshake IPA? That's another beast entirely, especially for a brewer with precisely zero quality IPAs in its portfolio. Is Moosehead even capable of doing this trendiest of styles justice?

Pours a foggy golden-blonde colour with a fair bit of turbidity; seated atop is one finger of frothy white foam that falls apart within ninety seconds. It leaves behind a thin collar and a few splotches of lace... some head retention would be nice, but I suppose it does look the part of a milkshake IPA. The nose is muted for an IPA, but likeable enough - I'm getting hints of strawberry, rhubarb tartness and citrusy orange/lemon, as well as some grainy, wheaty pale maltiness, and also a few muddled suggestions of indeterminate tropical fruit - maybe mango or passion fruit?

This one's kind of all over the place - the rhubarb tartness is discernible at first, but for the most part this beer's flavours just kind of blend together into a vaguely fruity mélange of blandness. Grainy, wheaty pale malts, grapefruit and orange citrus come through by mid-sip, with more rhubarb and a touch of lactose sugar sweetness carrying on through the finish; most of these flavours have faded upon reaching the aftertaste, which is fairly neutral, save for the faintest suggestion of strawberry (which immediately vanishes). Medium-light in body, with middling carbonation levels that provide a bit of spritz and crispness to the brew's otherwise smooth mouthfeel.

Final Grade: 3.39, a passable B-. Moosehead's Strawberry Rhubarb Milkshake IPA tastes alright, but in truth I don't think it's much of an IPA at all. The hop flavours don't pop, and neither do the strawberry and/or rhubarb - in fact, the former is barely even noticeable. In the end, it comes off as a mundane, lightly fruited pale ale that isn't likely to satisfy a plurality of beer geeks. I don't mind this beer, and I finished my can easily enough, but I have no real intention of returning to it in the future. Give this a shot if your curiosity is sufficiently piqued, but don't expect a memorable experience.

Whit less hops and sugar, this would likely be a decent sour. As it stands now, who put that IPA on the can?, it is a huge let down for real IPA fans. Oh well, what was I expecting? Only noticed/paid attention to the Moosehead name on the can after opening it.