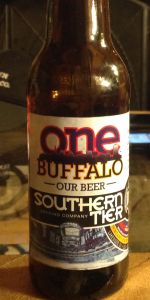 One Buffalo is the product of a partnership between Southern Tier Brewing Company and Pegula Sports and Entertainment for Buffalo Bills and Sabres fans. A combination of North American hops, malted barley, oats and wheat, it’s a smooth, refreshing craft beer brewed to 4.8 percent alcohol/volume.

Feels light, but not watery. It fills the palate and smooths quickly across the palate, finishing crisp and lightly dry. Very thirst-quenching and refreshing.

Overall, this is a solid beer. Simple, straightforward and refreshing.

Rated by BillRoth from Maryland

Rated by BuzzIPAman from New York

Reviewed by Rock_Glenn from New York

Reviewed by LandRoverErik from New York

3.76/5  rDev +5.9%
look: 4 | smell: 3 | taste: 4 | feel: 4 | overall: 4
All around good drinking beer. Not too heavy, not too light. Definitely designed for 1st timers or your typical Buffalonians who have never had anything other than Labatt or Molson. I think they did well with the flavor. It is a good balance to attract your domestic drinker as well as satisfy those of us who prefer a more flavorful option.
Apr 27, 2016
Rated: 3.5 by Wortman1998 from New York

T: grainy for a moment, then corn to the finish; virtually no bitterness; a little metallic in the aftertaste;

O: I get that this is a beer designed to attract the adjunct lager crowd, but I think Southern Tier could have brewed a better beer than this and still accomplished their goal;

4.06/5  rDev +14.4%
look: 4 | smell: 4.25 | taste: 4 | feel: 4 | overall: 4
Buffalo has some of the harshest, coldest, most ungodly winters in the country and yet this beer that bears the city's name is all sunshine and sand: this daisy yellow liquid is bright enough to look like it was once part of the sun itself. And its head is reminiscent of the white beaches you'd see in a travel add.

One Buffalo was made for Pegula Sports and Entertainment, the owners of the Bills and Sabres, so we know who the target market is. I'm sure anything that doesn't smell of corn syrup and foul, skunky adjuncts would be an improvement over the offerings at Ralph Wilson Stadium or First Niagara Center...

But this aroma has a bright, prominent, zesty aroma that completely shatters expectations. I don't know what all the Blue Light drinkers make of it but I'm in hop heaven! A combo of Willamette and Centennial creates this sublime overture of grass, flowers, and citrus for the clean, grainy malt base.

For a lowly Blonde Ale this thing sure has character - it may be simple but it's far from plain. Each sip opens with a wonderfully pleasant lemon drop flavour that then shares the stage with rose petals, orange peel, and even a pinch of lavender. The malt is dry, crisp, and faintly bready. It, too, is delicious.

It's typically Southern Tier's heavy-hitters that most people are enamored with (given fantastic offerings like Pumking, Choklat and UnEarthly, to name just a few, it's understandable why that is). But One Buffalo is truly the most impressive beer of theirs I've had in years. This style doesn't get any better.

Reviewed by BeerLover50 from New York