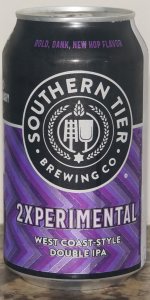 Taste is also mostly orange, but not like the aroma. A bit difficult to describe, as I don't think I've ever encountered this exact taste. Mandarin, &/or blood orange, but past its prime, maybe even a after a partial freeze? Also some of the pine and malt present in the aroma, but more muted. Light orange rind bitterness lingers after.

Feel is medium , smooth, slightly creamy, with moderate, very fine carbonation, that give a little bite at finish.

Overall, this is odd, and a bit muddled. Looks good, feels good, taste is part weird, part missing . That said, it could grow on me, IF somebody gave it to me. ;) I won't be seeking it out again for myself. After having the first two colder, I'd definitely advise letting it warm up to 50F +/- , at least. This one is much better than the previous two. :) If I had rated it cold(ish) , it'd probably be ~ .50 lower.

Smells very lightly of citrus and a hint of pineapple.

Tastes are faint as well. Getting a hint of sweet citrus in the taste and a mixture of pine and alcohol.

If the experiment was to make a boring beer, this was a success. It's drinkable, but not much going on here. Move along...

A - Pours a medium to dark gold color with a billowy, rocky, white head and steady carbonation.

S - Aroma is light to the point of almost non-existent. Very delicate pineapple and citrus on the nose, not much more. Overall aroma is odd.

T - Light malt along with a weird citrus and a small amount of fruit rind pepper dankness.

O - There's really no personality to this beer, will pass next time.

Fairly mild aroma, with notes of lemon, honey, grass, resin, pepper, and a touch of dankness.

Semi-sweet on the palate, with a big dose of doughy white bread malts, honey, and a banana-like yeast expression. Not much in the way of hops, with notes of peach and coconut - and that's about it. Somehow drinks more like a BSPA than a WC IIPA, with moderate to low bitterness, as well.

This tastes OK, but it seems like a big stylistic miss. In fact, I think it tastes pretty decent, not entirely unlike a tropical drink you might enjoy on a cruise, but if you were expecting the bracing bitterness of a throwback IIPA, you will be profoundly disappointed.

A bit conflicted on this one on one hand it was pretty balanced has a good hop bite and wasn't too bitter on the other hand it didn't really pack as much punch or flavor compared to the regular 2xIPA which is good but not really wowing anybody lately. Not bad but I wouldn't have it again

Appearance: The body of the beer is a nice copper color that trends a bit darker. It has good clarity with a mild opalescence. The head is large, white, and fluffy. It has good head retention and very nice lacing. It is a very good looking beer.

Aroma: Oddly there doesn't seem to be any aroma. Inhaling extremely deeply and covering the top of the glass only gives off a very, very, very light aroma of spearmint bubblegum. It is a very disappointing and almost completely nonexistent aroma.

Mouthfeel: It is an easy to drink beer with a body that rests on the upper side of light. The can states that this is "8.2% ALC BY VOL" and it does a phenomenal job of hiding that. It has a hop bitterness that is medium and trends on the lower side. It drinks noticeably well.

Overall: The can states that this is a "BOLD, DANK, NEW HOP FLAVOR" and that it is a "WEST COAST-STYLE DOUBLE IPA." The flavors taste a lot like juniper berry, mint, and a touch of clove which seems more like it would fit in a Christmas Ale than a West Coast IPA. It is an interesting enough beer that people might enjoy it just for the novelty of experiencing it, but I would never substitute this for an average West Coast IPA. I wouldn't buy it again but I wouldn't stop a person from trying it either.

This doesn't taste bad but it's a sweet sugary rush kinda like when you bite down on the cream soda or Pina colada dum dum sucker. It's okay ill finish the can but mehhh